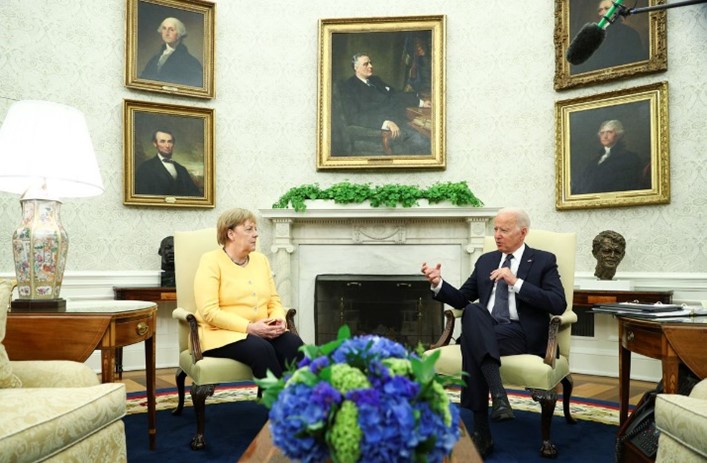 Nord Stream Fallout.  On the heels of German Chancellor Angela Merkel’s visit to the White House in July, the Biden administration reached an agreement with Berlin that assumes completion of the Nord Stream 2 gas pipeline between Russia and Germany and outlines ways to mitigate its risks. The US previously threatened sanctions against Berlin if it moved forward with the pipeline, which Poland, Ukraine, and other eastern European nations fear could expand the Kremlin’s coercive leverage against them. Under the agreement, Germany agreed to invest in Ukraine’s green technology infrastructure and work with the United States on initiatives to diminish Russia’s energy dominance in Europe, including sanctions should Moscow commit further aggression against Ukraine.

The CCP at 100.  Marking the 100th anniversary of the Chinese Communist Party on July 1, Chinese President Xi Jinping touted the success of “socialism with Chinese characteristics,” while reaffirming the party’s “unshakeable commitment” to preventing Taiwan’s independence, and warning that foreign powers that try to bully China “will crack their heads and spill blood against a Great Wall of steel.” Xi later pushed back against US-led efforts to advance a democratic world order, asserting that there are “different pathways toward well-being” and that other nations “should not seek world hegemony through small-group politics.”

Pandemic Revival.  Spurred by the highly infectious Delta variant, first identified in India, coronavirus cases surged once again in the United States, Europe, and across much of the globe. The spread of the variant outpaced vaccine distribution, prompting the return of mask mandates and further restrictions in many communities, as a growing number of breakthrough cases among those already vaccinated also raised concerns.

“The foundation of our relationship is a shared commitment to democratic principles, values, and institutions. Together, we will uphold the rule of law, promote transparency and good governance, and support civil society and independent media…. We must act now to demonstrate that democracy delivers for our people at home and that democratic leadership delivers for the world.”

– The Washington Declaration, issued by US President Joe Biden and German Chancellor Angela Merkel on July 15, 2021