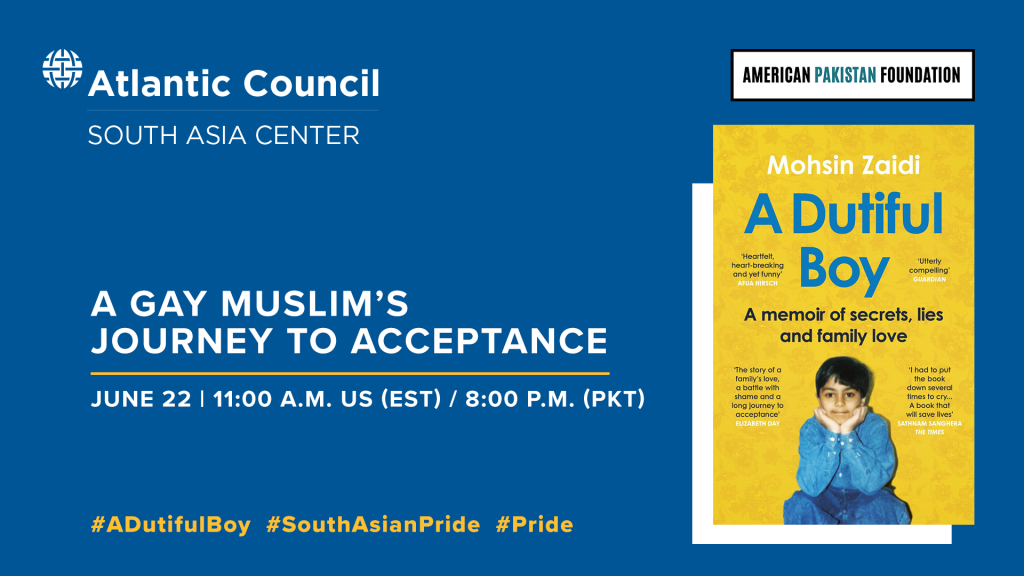 On June 11, 2021, the Atlantic Council’s South Asia Center and the American Pakistan Foundation co-hosted author Mohsin Zaidi for a conversation on his new book, A Dutiful Boy: A memoir of a gay Muslim’s journey to acceptance, and the underlying issues it addresses relating to race, gender identity, social class, religious discrimination and more. The panelists included: Akbar Shahid Ahmed, Senior Foreign Affairs Reporter for the HuffPost; Maliha Khan, Director of the Muslims for Progressive Values (MPV) and Co-chair of the MPV Board of Trustees. Shuja Nawaz, Distinguished Fellow for the Atlantic Council’s South Asia Center, moderated the event.

According to Zaidi, the inspiration behind “A Dutiful Boy: A memoir of a gay Muslim’s journey to acceptance” stems from two avenues, the television show Queer as Folk and feeling ashamed. The former sparked Zaidi’s self-realization of his identity as a gay Muslim, a moment of excitement quickly overshadowed by fear, desolation, and loneliness for the outsider status he felt, while regarding the latter, Zaidi notes the deep sense of shame associated with his newfound identity especially considering the author’s strict religious upbringing as a Shi’a Muslim that prohibits even using the term gay. Filled with conflicting emotions, Zaidi took three pilgrimages to Damascus throughout his childhood in hopes of curing himself, culminating in 11,000 prayers from the age of thirteen to fifteen asking for Allah to cure him. Zaidi’s novel is a testament of his experiences and what he hopes is a resource for those feeling alone.

Building off the themes in Zaidi’s book, the conversation pivoted to social issues covering a range of topics, such as social class, debating the racial and religious identity within the Black Asian ethnic minority (BAME), the Black Lives Matter movement, and more. Take, for instance, the lack of attention to social issues faced by South Asians in Britain despite comprising the largest minority group, as opposed to the Black community’s experience. This is in part, Zaidi argues, because the “Black Lives Matter” movement is catalyzed by its platform and attention in the United States which has drawn widespread global attention, and which the South Asian community lacks and needs. Moreover, Zaidi states that “every conversation around race is not born equal” and argues there is an over preoccupation with the semantics of racial equality, rather than a focus on real issues deeply impacting livelihoods. Consequently, efforts to raise awareness and make progress are overshadowed by less impactful actions.

Subsequently, Maliha Khan from Muslims for Progressive Values joined to discuss assimilation through the South Asian experience and how self-discovery in the United States as an immigrant manifests. Notably, challenges revolve around balancing the American culture with one’s home culture and requires the separation of cultural practices and religious values to navigate so. Following so, Akhbar Shahid Ahmed, Senior Foreign Affairs Reporter for HuffPost and a gay Muslim himself, asked what influences offered Zaidi guidance and how they helped lead to self-acceptance. The author elaborated that he sought comfort from his counselor, close friends, and later in life, through organizations such as the Inclusive Mosque Initiative and UK Black Pride, all of which fostered a sense of community and identity.

Following the panel discussion, Mr Nawaz welcomed former South Asia Center intern and American Pakistan Foundation fellow, Shariq Farooqi, also a queer Muslim advocate, who asked Zaidi how he builds communities among marginalized populations and navigates the developing landscape as more queer South Asians and Muslims share their stories, a support network that was absent when Zaidi himself came out. Zaidi noted that even though the journey started off alone, he was able to navigate against these issues through prevalent support from individuals in his life.

For many Pakistani Americans, being raised in the United States is a constant challenge. As Khan mentioned, the balance of upholding the Pakistani cultural values and integration into the American culture is an overwhelming concept and any issues regarding gender identity, sexual orientation, and homosexuality are unspoken matters. Consequently, feelings of shame and guilt transpire queer individuals within the Pakistani community as many are disowned by their parents. There is a constant fear that Allah will not accept their sexuality, and internal battle of how it goes against the fundamentals of the Quran. Acceptance and recognition of the LGTBQ+ community by  Pakistani-Americans is a shortcoming, and must be addressed.

In the future, Zaidi hopes the next generation will share their stories, stand up against homophobia, and continue the work of his book. He hopes to see a progression in a Muslim ally network that supports the families of Queer communities with straight Muslims as allies who support LGBTQ+ rights. The conversation closed with James Baldwin’s quote, “Not everything that is faced can be changed. But nothing can be changed until it is faced.”

The American Pakistan Foundation (APF) empowers the Pakistani American community and builds bridges between the United States and Pakistan.

Event recap: “I’ll Meet You There” with Iram Parveen Bilal and Shuja Nawaz

On May 21, 2021, the Atlantic Council’s South Asia Center hosted filmmaker Iram Parveen Bilal for a conversation on her new film, I’ll Meet You There, and the underlying issues it addresses relating to immigrants, identity, race and surveillance, and more.

By Phillip Baumgart and Shariq Farooqi