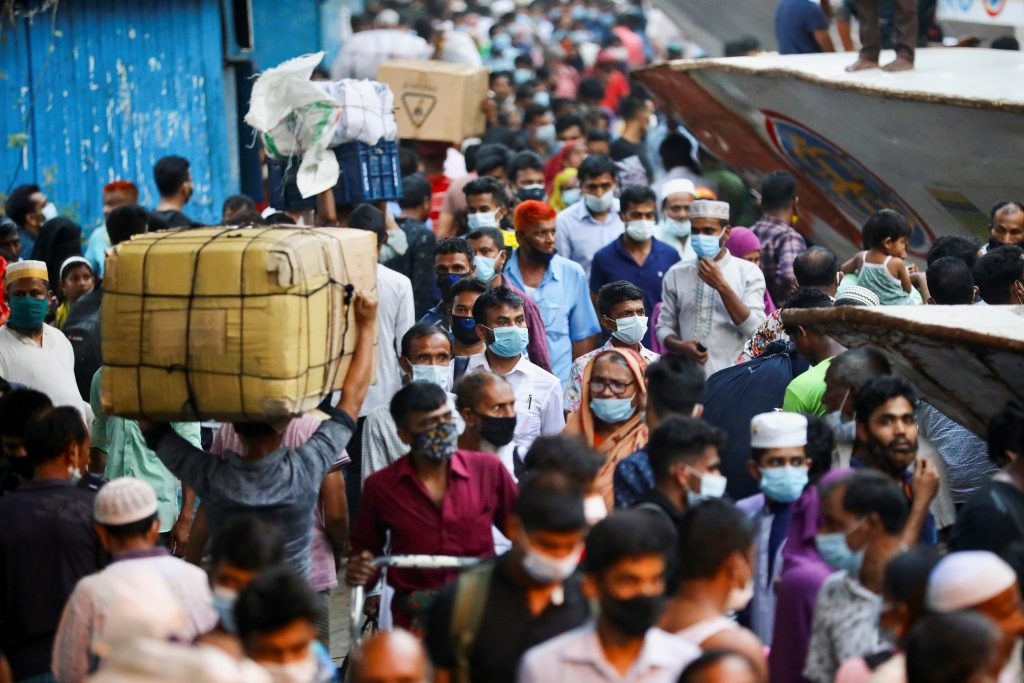 This conversation is the second installment in a series of events focusing on post-pandemic South Asia. The first event in this series focused on Pakistan, in particular, on how the pandemic would affect Pakistan’s economy and regional environment. The event recap can be found here.

Dr Mofijul Bulbul provided statistics to demonstrate the impact of COVID-19 pandemic on Bangladesh. With a death rate of 1.55 percent and a case detection rate of 13.71 so far, Dr Bulbul believes that the pandemic has not been too devastating for Bangladesh when compared to other Asian countries, in part due the government’s approach of heightening surveillance and laboratory support to deal with the cases swiftly. With the government rolling out specific guidelines short of a national lockdown, the acquisition of PPE kits from private companies, and foreign assistance, Dr Bulbul was optimistic that Bangladesh was on track to reduce its death rate in the backdrop of a second wave. Meanwhile, Dr Nooruddin, with less optimism, pointed out the certainty of the infection numbers being underreported.

Bangladesh has sealed off its borders to India, where the number of cases continues to break daily records; however, the identification of the Indian variant within the shores of Bangladesh is a cause for concern. As the government attempts to vaccinate its population, it should monitor numbers and stock up oxygen and healthcare supplies to avoid shortages and a potential crisis that inundates its healthcare system. Moreover, the government must make sure to include the country’s most vulnerable in its vaccination efforts, including the Rohingya refugees residing in the overcrowded slums in Cox’s Bazar and those living in more inaccessible and rural areas.

Dr Fahmida Khatun pointed out that the Bangladeshi economy was affected by lower private investments, lower exports, and unemployment prior to the COVID-19 outbreak, and the pandemic and lockdown only magnified these economic pressures. According to Dr Khatun, the government’s stimulus package, of which 20 percent is fiscal support, is inadequate. While the larger export-oriented businesses are postured to utilize the loan aspect of the stimulus package and recover, Dr Khatun predicted that small- and medium-sized businesses would struggle due to discrimination they face from commercial banks. She asserted that the government needs to boost its expenditure and investment in the economy and distribute the loans through micro financial institutions.

While February 2021 saw hopeful talks about the Bangladeshi economy making a K-shaped recovery due to an increase in remittances and exports, the ongoing and more dire second-wave has introduced new challenges. With some sectors of the economy set to recover faster than others, Bangladesh risks augmenting socio-economic cleavages present within its society. Along with criticisms of the 23 stimulus packages not reaching the country’s most marginalized, the pandemic and its disproportionate economic impact would have societal reverberations on gender gains, and thus, an inclusive economic recovery is imperative.

Bangladesh in the midst of geopolitical rivalries

Dr Rudabeh Shahid offered insights into Bangladesh’s current geostrategic landscape. Since India’s healthcare crisis prompted New Delhi to stop its export of Covishield vaccines to Dhaka overnight, the latter had to turn to Beijing and Moscow to fill the vacuum and meet the vaccine demand in Bangladesh. Along with sending half a million doses of Chinese Sinopharm vaccines, another prominent development from China according to Dr Shahid included the Chinese Ambassador’s comments that Bangladesh will not join the quad security initiative led by the United States. Bangladeshi Foreign Minister Momen has since stated  that no one has invited Bangladesh to join the quad and that Bangladesh would determine its own foreign policy. Dr Shahid opined that along with endangering its already fragile relations with India, Bangladesh would also risk offending Washington should it refuse to be a part of the quad security initiative, making the balancing act difficult moving forward.

While Bangladesh has dexterously balanced its relationships with both India and China so far, the recent vaccine assistance from China makes Bangladesh more prone to falling into China’s debt-trap diplomacy. Bangladesh’s exclusive reliance on India for vaccine supply comes as a mistake but also highlights a missed opportunity by the Bangladeshi government to produce vaccines locally. Furthermore, Bangladesh’s dilemma of whether or not to join the Quad Security Initiative—which arguably is also a means for Washington and New Delhi to offset China’s growing influence in the region—is sure to ruffle feathers and be a battleground for geopolitical rivalries to unfold.

A political crisis above all

In addition to the economic and healthcare crises, Dr Ali Riaz shed light on Bangladesh’s political crisis by emphasizing that the government used the 2018 national elections and the pandemic as incentives to precipitate the existing crackdown on democracy and freedom of speech. Additionally, unaccountability and a lack of transparency from the government, Dr Riaz contended, are causes of concern as low death numbers fail to paint the whole picture. Instead, the government has clamped down on dissent to handle the pandemic producing widespread fear in the population. Provocatively, Dr Riaz described Bangladesh as possessing a “facade of democracy,” where the opposition has no direction or systemic ability to challenge the government in power.

Routine crackdowns on dissent through tools like the Digital Security Act in Bangladesh have parallels across other South Asian countries. One need not look far to identify similar authoritarian tendencies present within Bangladesh’s western neighbour—India, where buried under the devastation and death caused by a frantic rise of COVID-19 cases, media freedom is increasingly on the decline. In the post-pandemic era, the ongoing assault on dissent and media freedom in Bangladesh and the rest of South Asia will continue to threaten the remnants of democracy in the continent.

As Bangladesh attempts to grab the reins of its foreign policy that is not subject to the whims of India and China, the need for domestic political reform also looms large. Amid the series of crises unfolding in the country, there is hope for the partial resettlement of the one million Rohingya refugees in Bangladesh as the Biden administration may agree to resettle some in 2021 and 2022. Regardless, it is a long road ahead to the “post” in “post-pandemic” for Bangladesh.

Kaveri Sarkar is a project assistant at the Atlantic Council’s South Asia Center where she manages the Afghanistan portfolio.

The Atlantic Council’s South Asia Center hosts a conversation on the future of Bangladesh’s economic, political, and healthcare landscapes in the context of the evolving COVID-19 pandemic.

A conversation about the post-pandemic future of Pakistan and the greater South Asia region.

By Rudabeh Shahid and Kaveri Sarkar

Away from India’s awful COVID-19 scenes playing out are elections Washington should not ignore. The ongoing state elections in India’s east, specifically the states of West Bengal and Assam, are characterized by dynamics central to today’s India and their results will have long-lasting implications for national politics. The fanning of toxic identity politics, compromising of democratic institutions, the worrisome rise of COVID-19 cases, and the effect on foreign relations are aspects of these elections that deserve Washington’s serious attention.

On February 12, 2021, the Atlantic Council’s South Asia Center hosted an event on Pakistan’s economic and regional environment in a post-pandemic world.

Image: Migrant people and workers board a passenger ferry at the Sadarghat Ferry Terminal as they leave Dhaka a day before a countrywide lockdown, imposed by the government after the coronavirus disease (COVID-19) cases increased in Dhaka, Bangladesh, April 4, 2021. REUTERS/Mohammad Ponir Hossain