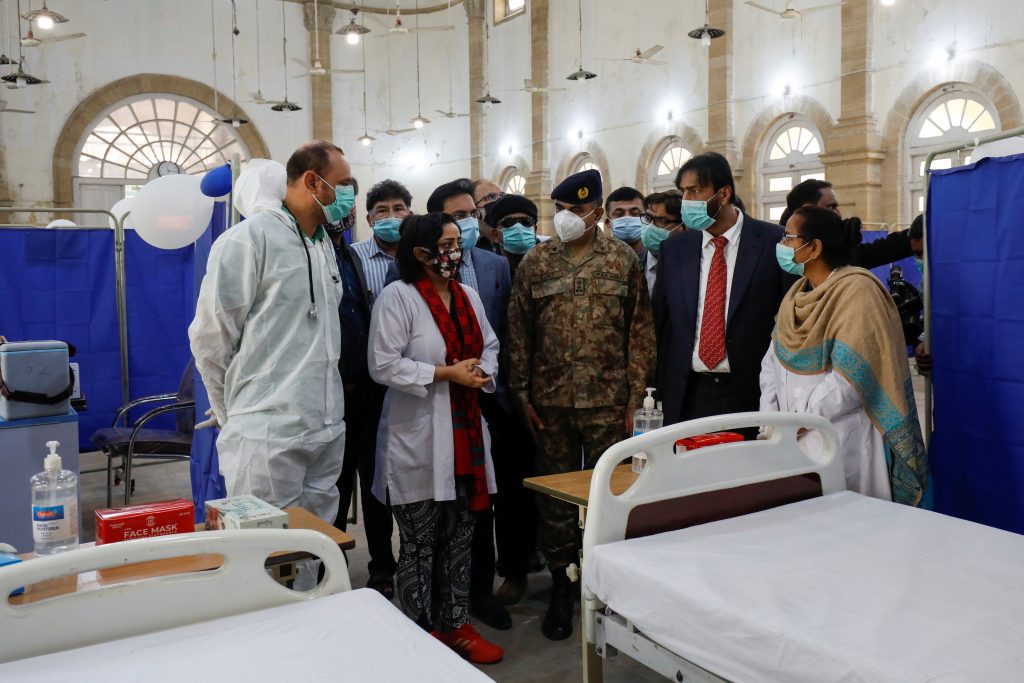 Dr. Adil Najam began by talking about his endeavor of interviewing 100 prominent scholars, leaders and thinkers about what COVID means for the world. Based on this, his insight was that global politics was turbulent even before the pandemic, and the pandemic is going to shape political realities in Pakistan, especially in the sphere of International affairs. He said that the internal dynamics of Pakistani politics remain the same, but the one external factor–US-China rivalry–has become even more apparent. We would also see effects on Pakistani domestic society.

Mr. Nawaz then brought up the issue of employment increasing not only in India, but also in Pakistan. Based on this using a wider lens, he asked Dr. Vali Nasr to talk about the turbulence in the Middle East, possible changes in the region between the United States and Iran, and how that would influence the region, in particular Pakistan. Dr. Nasr responded that the US-China relationship is going to be even more prominent where Pakistan finds itself closely involved in the frontlines. COVID-19 has shown that terrorism or Muslims are no longer the moving factor of US foreign policy. The existential threat shaped by COVID-19 and its internal politics has propelled the United States to leave the Middle East and Afghanistan, which changes the parameters of how the Pakistan military operates. He also mentioned that the economic impact of the pandemic has led Saudi Arabia to look away from Pakistan and religion to look westwards, along with economic entrenchment in the UAE, which would result in the departure of Pakistani expatriates from those countries. The United States policy of leaving the Middle East would encourage it to end the war in Yemen, Libya and maybe Syria, which would mean that Pakistan will have to find a new direction to look to.

After this, Mr. Nawaz turned to Dr. Huma Baqai to talk about her new book on COVID. Dr. Baqai’s insights included Pakistan viewing China as a means of increasing its foreign policy options as opposed to the stringent conditions that Saudi Arabia had provided. Pakistan recognizes that there is a change in its relationship with Saudi Arabia, while also looking eastward at Iran. While it is still affected by India, there is a change in Pakistan wanting to shift from being a geopolitical state to a geoeconomic state, which has been influenced by its growing relationship with China. While hesitant to put Pakistan in camp politics, Dr. Baqai argued that at the end of the day, Pakistan is uneasy about growing ties between the US and India. Pakistan feels like it is being pushed into the camp of China, whereas it needs space to balance its relationship with the United States.

Mr. Nawaz then turned to Ambassador Cameron Munter to inquire about the US-India-Pakistan relationship. Ambassador Munter emphasized that the context in which Pakistan’s foreign policy operates has transformed as the dynamics of its three patrons– the US, China, Saudi Arabia–have changed. It would be wise for Pakistan to get out of the trap of pitting one country against the other and deriving the most gains from where it can. Ambassador Munter voiced his concern that the issue is not whether the United States might pressure Pakistan to act in a particular way, but that it won’t care about what Pakistan does at all, which he believes to be “an enormous mistake. He advised Pakistan to use this time as an opportunity to invest in high-value industries and escape the stronghold of textile and low-value agricultural industry, thereby harnessing the US’s attention.

Mr. Nawaz then took up Dr. Rabia Aktar’s question on how Pakistan’s threat landscape is going to look in the aftermath of COVID-19 and against the backdrop of the Sino-US rivalry and US-India strategic partnership. Afterwards, Dr. Najam shifted the conversation from Pakistan to Pakistanis. He did not think that the US’s receding attention is necessarily a bad thing. He also mentioned that, while the pandemic shook up the global economy, because Pakistan’s economy was more insulated, Pakistan’s economy or unemployment numbers were not terribly impacted when compared to international labor statistics, and that it encouraged the e-commerce economy to grow in unprecedented ways. On the other hand, the drawback of this insulation has been that Pakistan was unable to take reins of some of the supply chains affected by COVID-19.

Dr. Najam mentioned the importance of youth education during the pandemic, as 60% of Pakistan’s population is 30 years or less. Mr. Nawaz then highlighted the importance of the question of who is going to provide facilities for the growing youth in Pakistan. Ambassador Munter suggested that, if a possible US withdrawal from Afghanistan leaves Pakistan in a less needed position in the eyes of the United States, then Pakistan should be proactive in attempting to creatively engage with Iran and China in a way that builds diplomatic bridges between the United States and Iran, and even the United States and China. Dr. Baqai challenged the previous comment by bringing forth the Pakistani view that every conversation in the United States advocates for Pakistan to change its relationship with China while Washington consistently shows that Pakistan is a priority. She cautioned that this attitude, if continued, will only elevate camp politics further, and questions Pakistan’s ability to mend relations in the background of President Biden adopting a harsh policy toward China as some critics argue to be the case.

In conclusion, Mr. Nawaz pointed out the importance of continuing this very important topic, and thanked all the panelists for their attendance and valuable contributions. The post-pandemic world offers Pakistan the opportunity to reevaluate its foreign policy, diversify its economic investments, as well as figure out ways to effectively follow through on its desired shift from a geopolitical state to a geoeconomic one.

A conversation about the post-pandemic future of Pakistan and the greater South Asia region.

Image: Members of the National Command and Operation Centre (NCOC), along with doctors and medical staff, visit the Khaliq Dina Hall and Library, which has been converted to a coronavirus disease (COVID-19) vaccination centre, in Karachi, Pakistan February 1, 2021. REUTERS/Akhtar Soomro