This report is part of a strategic collaboration launched by the Atlantic Council (Washington, DC), the Emirates Policy Center (Abu Dhabi), and the Institute for National Security Studies (Tel Aviv). The authors are associated with the initiative’s Working Group on Chinese and Russian Power Projection in the Middle East. The views expressed by the authors are theirs and not their institutions.’

Russia and China are often mischaracterized as allies. Authors Jonathan Fulton and Li-Chen Sim explore the perception that their revisionist preferences for international order align, and that their desires for a less US-centered international order mean they are collaborating toward this end. In the report, the authors agree that Russia’s more prominent security role in MENA augments China’s larger economic footprint; and that together they function as wedge strategies vis-à-vis US relations with traditional interlocutors in the region. There is, however, little evidence that China and Russia proactively coordinate their approaches in MENA.

In a new Scowcroft Middle East Security Initiative report, “Great Power Projection in the Middle East: The China-Russia Relationship as a Force Multiplier,” Fulton and Sim provide a comparative analysis of the approaches that China and Russia have adopted to develop their regional presence in MENA across four realms of influence: political, economic, security, and public diplomacy. The authors go on to address four questions:

An expert on Chinese policy toward the Middle East, Fulton has written widely on the topic for both academic and popular publications. He is the author of China’s Relations with the Gulf Monarchies and co-editor of External Powers and the Gulf Monarchies. Fulton received his Ph.D. from the University of Leicester, where his dissertation focused on Chinese relations with the Gulf Cooperation Council member states. He also holds degrees from Staffordshire University, the University of Southern Queensland, and Dalhousie University.

Dr. Li-Chen Sim is an Assistant Professor at Khalifa University in the UAE. She holds a Ph.D. in Politics from Oxford and is a specialist in the political economy of Gulf and Russian energy and its intersection with domestic politics as well as international relations. Her interests include the politics of energy in the Gulf, Gulf-Asia exchanges, and Russia-Gulf interactions. Her latest book is Low Carbon Energy in MENA (Palgrave, 2021).

A force multiplier? China and Russia’s relationship in the Middle East

A conversation that explores Great Power Projection and the China-Russia Relationship as a Force Multiplier in the Middle East and their approaches to developing their regional presence. 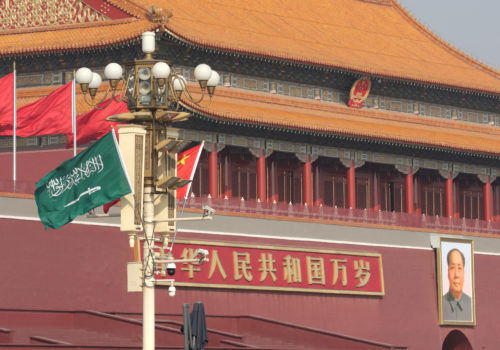 A quiet shift in geopolitics has been taking place, with East Asia and the Middle East drawing closer together. Energy trade explains part of this, as Japan, South Korea, and China are consistently among the largest export markets for Middle East oil and gas. In the case of China, the relationships have moved beyond economic […] 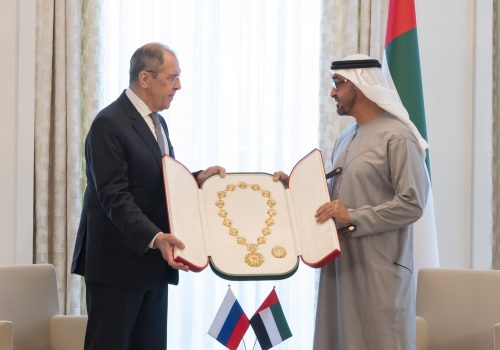 Russia in the Middle East: A source of stability or a pot-stirrer?

Image: Chinese President Xi Jinping and Russian President Vladimir Putin attend a ceremony dedicated to the 70th anniversary of the establishment of diplomatic relations between Russia and China, in Bolshoi Theatre in Moscow, Russia June 5, 2019. Sergei Ilnitsky/Pool via Reuters