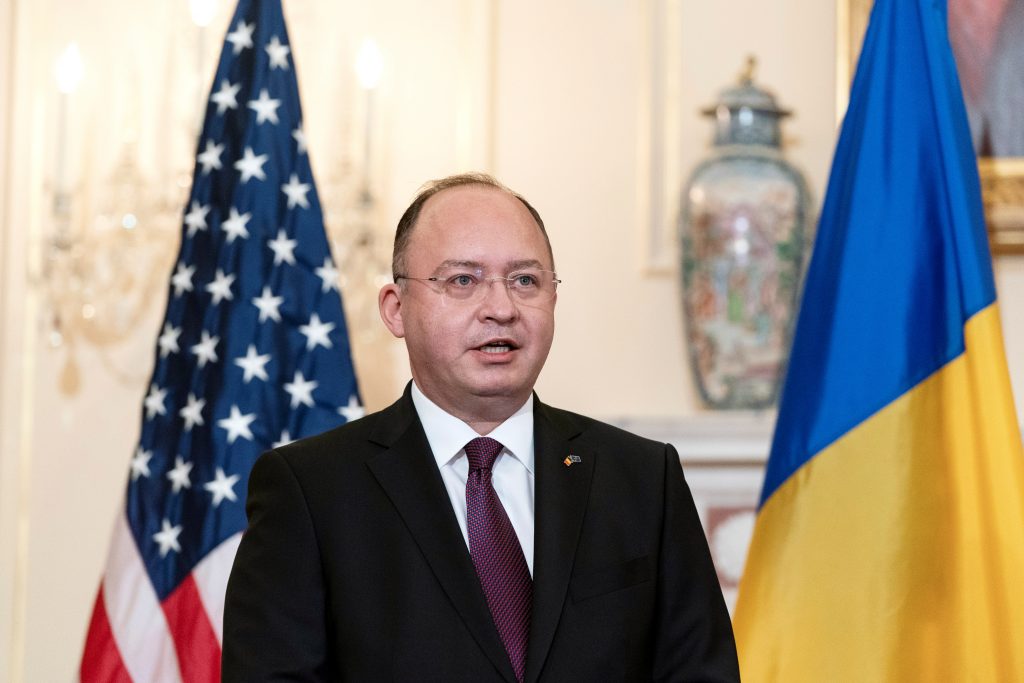 Minister of Foreign Affairs of Romania Bogdan Aurescu spoke at an Atlantic Council roundtable on the Three Seas Initiative on November 9, 2021. Here are his prepared remarks in full.

Thank you for taking such great interest in this discussion. I hope I will provide some insights into Romania’s approach to regional connectivity at a national level and as part of the Three Seas Initiative.

I hope that our conversation today will act as a catalyst—including through you, as message amplifiers—for higher interest of the US administration and agencies to find adequate ways of direct involvement in strategic interconnection projects in our region.

I am not going to go very far into the history of the Three Seas Initiative, as I presume you are familiar with its basics and outcomes so far. However, what I want to underline in this context is that it represents a clear example of positive transatlantic cooperation, which benefitted from US support and involvement from the very beginning. It has a pragmatic approach, focused on the implementation of strategic interconnectivity projects of high interest for the region and beyond—more precisely, also for strategic partners like the US. Actually, this was the very purpose of creating the Three Seas Initiative.

Romania is very grateful for the Biden administration’s renewed support for the initiative, as expressed on numerous occasions. As President Joe Biden suggested during the Three Seas Summit in Sofia this July, the initiative can serve to “prove how democracies can lead with their values and deliver for the needs of their people, ending the COVID-19 pandemic, building more resilient and more equitable economies, investing in high-standard infrastructure, in a way that is transparent.” I also recall what Secretary Blinken said at the Munich Security Conference at the beginning of this year: “The United States has been a strong supporter of the Three Seas Initiative from the start, and it addresses many of our shared priorities. Like you, we want more regional economic development. Your work to build better infrastructure in the energy, transportation, and digital sectors are key to that goal.”

From the start, the initiative had three guiding principles: pro-economic development via enhanced interconnectivity, pro-EU, and pro-transatlantic. The initiative was conceived to facilitate greater interconnectivity in Central and Eastern Europe, boost economic and trade relations and investment flows in the region and with other Euro-Atlantic partners, thus contributing to the overall strengthening of the EU and the transatlantic relationship. The initiative must continue to bring together business communities, investors, and policy makers to its three priority areas—transport, energy, and digital.

Romania has made important contributions to the initiative. The summit and the first business forum of the format, which President Iohannis successfully hosted in Bucharest in 2018, marked the initiative’s political and conceptual maturity, as well as its transition to pragmatic developments. I was coordinating, at that time, the preparation for the summit, as foreign policy advisor to the president of Romania. On that occasion, important tools of 3SI were agreed: the list of priority interconnection projects in the fields of transport, energy, and digital; the network of chambers of commerce in the region; and the Three Seas Investment Fund was created. Romania has thus contributed the conceptual and political maturity of this initiative, through creating its concrete instruments and needed tools.

The Three Seas Investment Fund is now fully operational, commencing the work of mobilizing resources in the benefit of our region. While acknowledging the first few investments, much remains to be done, and I would like to reiterate that our vision is and should be going beyond purely commercial arguments.

While we fully understand the need to ensure a selection of the projects based on commercial criteria, we should keep in mind that the Three Seas Investment Fund represents the expression of the highest political level will, so we consider that the strategic value of the selected projects should also be taken into account.

I believe the Three Seas Initiative has a unique profile, through its capacity to consolidate transatlantic cooperation around major strategic projects, which can have impact on economic recovery, growth, and resilience on both sides of the Atlantic.

To us, the development of regional connectivity through quality, standard-compliant infrastructure is a strategic priority.

In this context, Romania pays special attention to the implementation of two projects in the field of infrastructure, which are of outstanding importance and strategic value for us and for the wider region: Rail2Sea (a railway line between the port of Gdansk at the Baltic Sea and the port of Constanța at the Black Sea) and Via Carpathia (a north-south, trans-European road route, crossing through Romania).

Now we are faced with the need to recover from a crisis of global proportions. Consequently, we are aiming at consolidating our strategic resilience. Thus, bridging this connectivity gap is more important than ever.

In this process, we are turning to solid, like-minded partners, from our region and beyond, who are not only indispensable for ensuring the region’s stability and security, but also for ensuring its prosperity and future perspectives, as opposed to those actors who do not share our values.

That is why I am here today to advocate for US interest to invest in these strategic connectivity projects—Rail2Sea and ViaCarpathia—and there are clear economic, military, and geostrategic reasons for it.

Romania is very interested to enhance cooperation with the relevant US institutions in order to put together some concrete and pragmatic ideas and solutions, draw appropriate action plans, followed by the strict monitoring of their implementation.

Allow me to mention some of the reasons for which these two projects, or at least Rail2Sea, should benefit from US attention.

Firstly, from a geostrategic point of view, increasing the US economic presence in the region, alongside the military one, by multiplying the United States’ connections to Central and Southeastern Europe in terms of security, economy, or energy, while ensuring the same cooperation of the region with our Western European partners, is highly important.

A financial implication of the US will also increase the confidence of other international investors and bring added value to the transatlantic agenda, thus facilitating an increase of availability of funding for investments in the region.

As I previously highlighted, while the Three Seas Fund, launched during the 2018 Three Seas Summit in Bucharest, looks at the projects proposed by participating states strictly from a commercial point of view, we believe that a strategic approach is highly needed. Therefore we are looking as well to encourage US investment solutions beyond the fund.

These two projects would also be especially well positioned to succeed in the dual digital and increasingly green context. Environmentally friendly solutions, coupled with cutting-edge innovations in the telecommunications sector, would be their hallmarks.

They are also a much-needed counterweight to other major projects in the region, which have been developed, in recent years, with the participation of actors who do not share our interests and democratic principles.

Allow me to present some specific information about each of the two projects:

Rail2Sea holds major economic and strategic potential, creating excellent conditions to facilitate a sustainable economic growth for the entire region. Our ambition is not only to establish a modern north-south railway corridor, but also to turn this project into a flagship example of digital and green infrastructure, as the new railway infrastructure can provide operational support for a modern digital network (for example: 5G) which complies with our transparency standards and are safe to use in the twenty-first century. The investment will include passages, tunnels, multimodal and intermodal stations, all of which coupled with digital infrastructure and, of course, with smart city technologies for each segment of the infrastructure. The railway will also provide a competitive solution for the transport of passengers and goods across Central and Eastern Europe in safe and secure conditions.

It can also be envisaged that the railway could be used to transport LNG or other sustainable energy resources, including from LNG projects supported by the US. The north-to-south axis could open up opportunities to modernize the strategic regional gas and oil transport infrastructure, through so called “virtual pipelines.” Regional harbors can be connected and thus become import options for the regional market.

Via Carpathia is a strategic infrastructure project, a new highway connection between Northern and Southern Europe, linking the Lithuanian harbor of Klaipeda, at the Baltic Sea, with the Greek port of Thessaloniki, in Greece, thus integrating the transport systems of the Three Seas participating countries. With the establishment of this new north-south transport connection in Central and Southeastern Europe, the interconnectivity of the region will be significantly increased. The investment will help integrate less-developed regions into mainstream international trade circuits and enhance their growth potential. The project will greatly contribute to intensified mobility between the countries involved, both for economic reasons (trade, transport, energy, tourism) and for military purposes.

Both these projects would also allow us to move our troops around in a more robust and strategically savvy manner. Strengthening the connectivity between the north and the south of NATO’s eastern flank is critical for the consolidation of Allied defense and deterrence posture.

Enhanced troop mobility would be able to defuse crises and add credibility to our calls for de-escalation. This is how economic-technological and security-military dimensions overlap in Central Europe, creating a strategic rationale for greater American involvement.

Finally, I would also like to stress again the importance of wider financial implication of the US in the implementation of strategic regional connectivity projects, as a crucial enabler of strategic connectivity, energy diversification, and the achievements of the Three Seas Initiative itself.

I believe that such progress can be obtained through focus on the most appropriate US funding formulas and closer coordination, including through the creation of working groups between Romania, the US, and other partners interested in advancing projects on various segments. 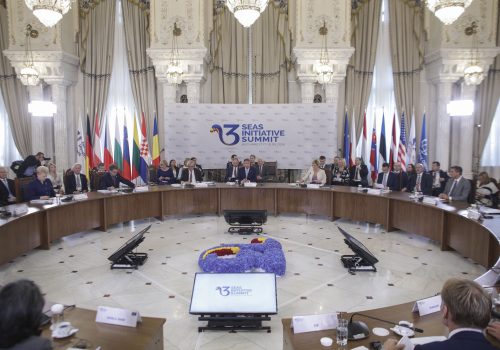 The Three Seas nations should invest in digital infrastructure, nurture emerging technologies, and amplify the region's voice on policy. Here's how. 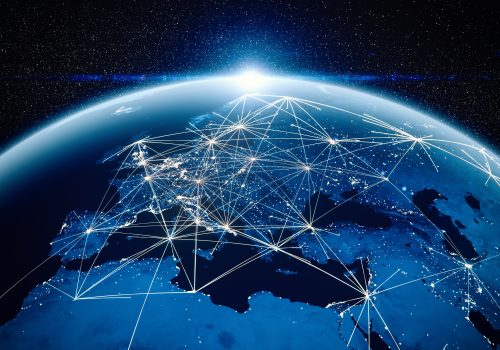 Collective cybersecurity for the Three Seas

In Central and Eastern Europe’s Three Seas region, twelve countries have joined together to invest in critical infrastructure projects and increase interconnectivity on energy, infrastructure, and digitization efforts along the way. To strengthen the resilience of these technical investments and better bind together the defensive cybersecurity operations of these societies, Three Seas member states should establish a regional hub for cybersecurity together with key private sector partners. 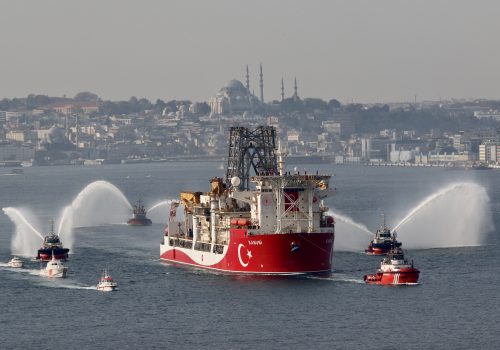 The Black Sea has vast untapped oil and gas reserves along with enormous renewable energy possibilities. This makes it potentially one of the world's great energy battlegrounds in the decades ahead.

Image: Romanian Foreign Minister Bogdan Aurescu speaks during a photo opportunity with Secretary of State Antony Blinken at the State Department on Monday, Nov. 8, 2021, in Washington. Photo by Alex Brandon/Pool via Reuters.