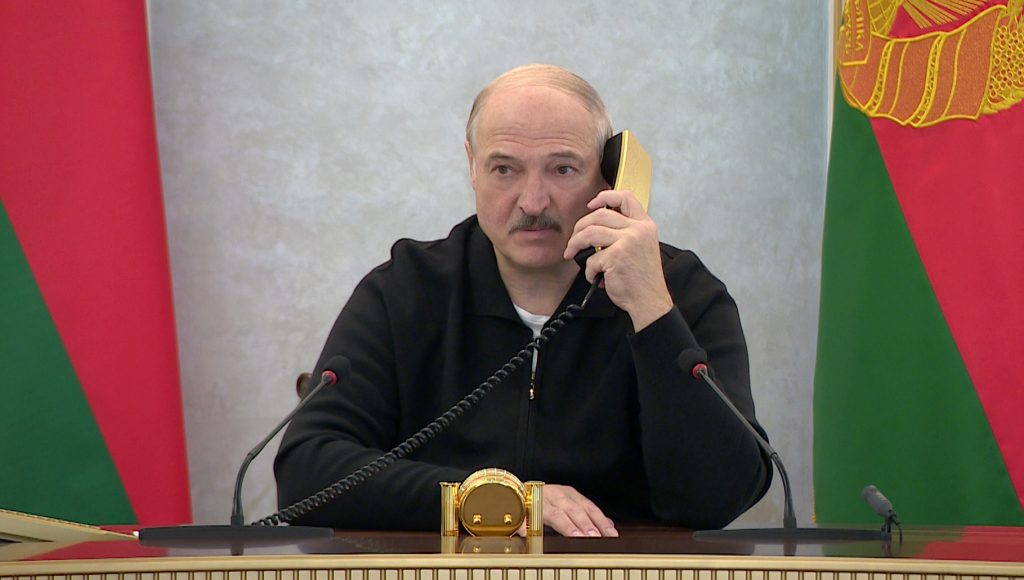 Belarusian dictator Alyaksandr Lukashenka has spent the past few weeks fighting for his political life as a pro-democracy uprising threatens to end his 26-year reign. Despite a dramatic loss of legitimacy, Lukashenka clings on. He continues to control the country’s security services and has also received strong backing from Russia, while the opposition lacks the international support or leadership to convert its overwhelming momentum into concrete political gains.

While this level of popular opposition is a new phenomenon in Belarus, Lukashenka also finds himself facing the more familiar menace of an impending financial collapse brought on by his patently poor policies and aggravated by the current turmoil. When confronted by similar situations in the past, he has previously relied on bailouts from either Russia or the West. But who would like to salvage the failing dictator on this occasion?

Lukashenka sees himself as the protector of the blue collar workers at a few dozen giant state-owned Belarusian companies. One of his key economic principles is that these workers should be entitled to an average wage of USD 500 per month. This may not seem like a large sum, but Lukashenka’s Soviet-style economic policies still struggle to deliver such salaries. As a consequence, Belarus tends to suffer from periodic currency crises. The last major crisis occurred in 2011, when Lukashenka was forced into a severe devaluation, which in turn led to inflation of 109 percent.

In late 2011, Putin decided to bail out Lukashenka. Before agreeing to do so, he demanded that Russian state-owned and oligarchic companies be allowed to take over the biggest and most attractive Belarusian state-owned giants. Lukashenka appeared to accept Putin’s terms, but in the end, most of these big Belarusian companies remained under the ownership of the Belarusian state. The Russian leader is not likely to allow himself to be tricked once again by a much-weakened Lukashenka. Nevertheless, the experience of 2011 provides a good indication of both Lukashenka’s and Putin’s economic game plans.

The political situation in Belarus today is completely different from 2011, but the economic dilemma is surprisingly similar, since the Belarusian economy has barely changed. It is therefore reasonable to assume that we are likely to see a similar financial crisis flaring up once again.

At present, the Belarusian ruble is floating. It has fallen by slightly over 10 percent in relation to the US dollar during the past month, and the rate of depreciation is accelerating. This means that Belarusian workers, who typically think in dollar terms, have lost ten percent of their income in the space of one month. The situation is likely to get much worse in the weeks ahead. This will deprive Lukashenka of any remaining economic legitimacy.

The mechanics of Belarus’s current financial crisis are painfully clear because it is a very Soviet-style economy. We have seen this kind of collapse before. Belarus has persistently small international currency reserves, but now they are down to only USD 4.3 billion. This is sufficient to cover just 1.4 months of imports, while three months is considered the minimum.

One somewhat surprising positive aspect of the Belarus economy is that it has amazingly good publicly available statistics. These tell us that in 2019, only 41 percent of Belarus’s exports went to countries outside of the former Soviet Union. Of these exports, fertilizers from Belaruskali and Grodno Azot accounted for USD 2.7 billion, and petrol from the Naftan and Mozyr oil refineries accounted for USD 6.5 billion. Taken together, these four state-owned companies represented 68 percent of Belarus’s exports to the West.

Based on these figures, it is possible to forecast what is likely to happen next in Belarus. At Belaruskali, Grodno Azot, and the Naftan oil refinery, workers have been on strike, while reports from the Mozyr oil refinery are unclear. A prolonged strike at any of these four state-owned companies would collapse Belarusian export revenues and the Belarusian ruble, bringing Lukashenko to his knees. Nevertheless, the scale of the looming economic threat facing the country is not yet widely understood or appreciated.

If the currency collapses, the real strife will start. Will the security forces remain as loyal to Lukashenka when he has run his country’s economy aground once again? Will the Russian state and oligarchic companies be able to seize what they failed to get in 2011? Or will the West, led by the International Monetary Fund and the European Union, be able to come up with a viable alternative? Let us hope they do so. The alternative might be the economic capture of a weakened Belarus by the Kremlin.

Anders Åslund is a senior fellow at the Atlantic Council in Washington. His latest book was “Russia‘s Crony Capitalism: The Path from Market Economy to Kleptocracy.”