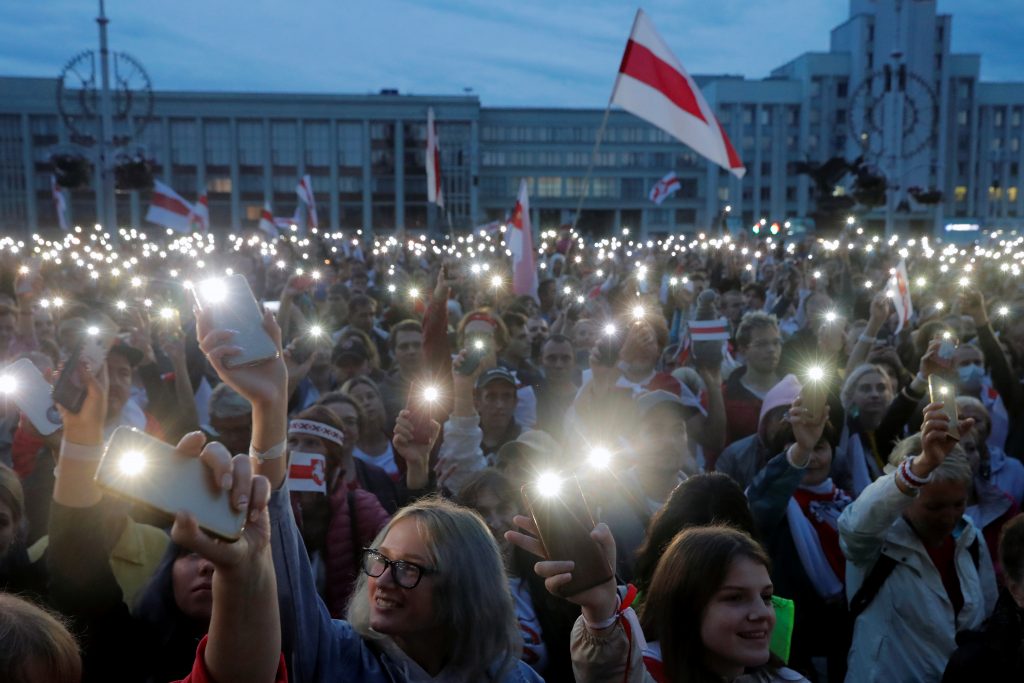 The following text is based on remarks by NED President Carl Gershman to the Kalinowski Forum in Vilnius on August 24, 2020.

Since the public launch of “A Call to Defend Democracy” in June 2020, nothing anywhere in the world has done more to reverse the authoritarian upsurge witnessed during the global pandemic than the extraordinary developments that are now taking place in Belarus.

I am sure that all of us are awestruck at the sheer display of people power and the courage of the Belarusian people to defend their right to freely elect their leaders, no matter how high the cost. The solidarity that has poured out onto the streets of towns across Belarus over the past two weeks has been a force to be reckoned with.

People have braved detention, bullets, stun grenades, severe beatings, and torture in police custody. They have continued to come out in large numbers, day after day, to peacefully declare that their voice will not be silenced. Not this time. Instead, we are witnessing an extraordinary, all-Belarusian, pro-democracy movement.

This historic moment belongs to the countless ordinary Belarusians who have emerged in the wake of a stolen election to form a united, civically awakened nation. It belongs to the hundreds of women, dressed in white and holding flowers, who created human chains in the streets of Minsk, Grodno, Gomel, Lida, and other places to silently protest police brutality. This moment also belongs to the thousands of workers who have risked their livelihoods by walking off their jobs, including people from all walks of life and all professions: plant workers, metro employees, teachers, and doctors. They have made it that much more difficult for Lukashenka to continue clinging to power.

It belongs as well to the state employees, including state media workers and law enforcement officers, who resigned from their posts because they could no longer carry out orders to lie to and stand against their compatriots. It belongs to the members of the security services who set down their shields.

This moment especially belongs to the women of Belarus.

In a country where politics has historically been dominated by men and where women in public life are still sometimes dismissively referred to as “devushki” (“girls”), the entire nation has become energized by three women. Thrust into politics quite abruptly and perhaps reluctantly after their husbands or partners were jailed or disqualified from competing in the presidential election, these women took on an authoritarian regime that hadn’t budged for 26 years. Lukashenka mockingly referred to them as “those poor girls” and “weak women.” But it was these women who inspired a nation to come together, and who went on to become symbols of hope that change is possible.

Events are still unfolding. There are dozens of political prisoners who must be immediately released. There are cases of torture, beatings, and other mistreatment of people in custody that need to be investigated. The culprits must be punished. We must also reject the politically motivated criminal prosecution of pro-democracy activists. Two members of the Coordination Council have been arrested. We call for their immediate release. Not least, we must reaffirm the fundamental rights of freedom of expression and the freedom to be informed. The ongoing information blackouts in Belarus, including the denial of printing services to independent newspapers and the blocking of dozens of websites, must cease without delay. All of this is necessary for the healing of the nation.

But one thing is for sure, even at this stage. Belarus is already a nation reborn. Lukashenka and his cronies simply cannot go back to business as usual after this Belarusian summer of solidarity. They thought that by unleashing terror they would stop the protests. They believed fear would paralyze the people. But they were mistaken. They must now concede defeat and exit the stage. There must be new elections, free and democratic.

Nineteenth century Belarusian patriot Konstanty Kalinowski would be proud of the men and women of this movement. For modern Belarusians, the January 1863 uprising against Russia that Kalinowski led is a symbol of their own struggle for national self-consciousness and self-determination. Belarusians have been engaged in this struggle for centuries. Under Lukashenka, they’ve had to fight this battle on two fronts – against Russia’s ubiquitous propaganda and against their own state’s choice to suppress Belarusian language, culture, and history.

It has only been in recent years that Lukashenka, pressed by Russia’s increasingly imperial ambitions and his own political instinct for survival, began to allow a process of soft Belarusianization to gradually unfold. This was to be his bane. Unwittingly, by allowing his people to openly speak their language, to wear their national colors, to commemorate their history, and to study their culture, Lukashenka unintentionally unleashed a process of national awakening. This has now led to the rise of a new sovereign nation that demands the right to determine its own future, independent of geopolitical pressures and imperialistic interference.

At the reburial last November in Vilnius of Kalinowski and 18 other rebels from the 1863 uprising, activists chanted the famous slogan “For Our Freedom and Yours, For Our Common Future.” This call to solidarity with neighbors across borders was first used by Poles in 1831 in support of the Decembrist uprising in Russia. Today, the demonstrations in Minsk and other Belarusian cities are linked in solidarity to protests 9,000km away in Khabarovsk and other cities in the Russian Far East, where protesters have followed events in Belarus and proclaimed: “We have the same ideals.”

These unifying ideals include freedom and democracy along with respect for human dignity and the rule of law. Today’s Belarus is the epicenter of the global struggle for democracy. May the rebirth of freedom in Belarus restore the hope of people everywhere that the struggle for democracy can overcome even the greatest obstacles, and that government of, by, and for the people is not about to perish from this earth.