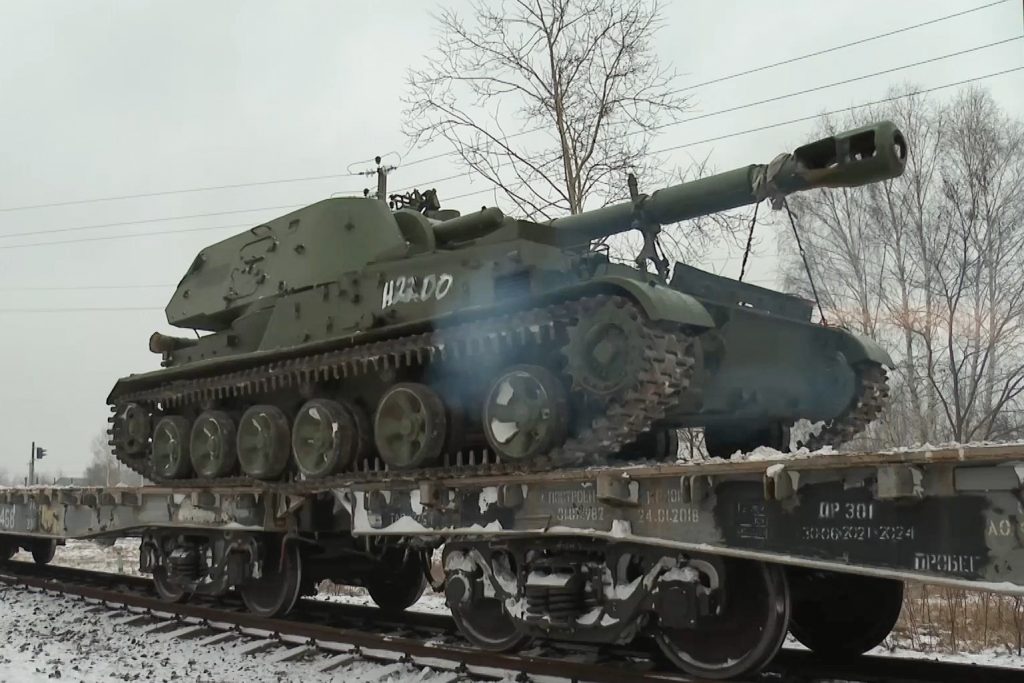 A group of anonymous cyber activists known as the Belarusian Cyber-Partisans claim to have hacked into the Belarusian Railways computer system this week in a bid to sabotage the deployment of Russian military units in the country. The moves comes amid mounting fears that Belarus may play a crucial role in a possible full-scale Russian invasion of Ukraine.

The Belarusian Cyber-Partisans group says it has accessed and encrypted Belarusian Railways databases in an effort to cause delays and hamper the movement of trains carrying Russian troops and military equipment towards the Belarusian border with Ukraine in the south of the country. “At the command of the terrorist Lukashenka, Belarusian Railways allows the occupying troops to enter our land,” the hacktivist group stated in a January 24 social media post. “We encrypted some Belarusian Railways servers, databases, and workstations to disrupt its operations.”

A representative of the Belarusian Cyber-Partisans told the UK’s Guardian newspaper that the hack attack was in direct response to the recent arrival of large numbers of Russian troops in Belarus. While this presence is ostensibly tied to joint military exercises which are scheduled to take place in February, many have viewed the deployment as part of the Kremlin’s intensifying encirclement of Ukraine ahead of a potential invasion of the country in the coming weeks.

“We don’t want Russian soldiers in Belarus since it compromises the sovereignty of the country and puts it in danger of occupation,” the unnamed Belarusian Cyber-Partisans representative commented. “It also pulls Belarus into a war with Ukraine. And probably Belarusian soldiers would have to participate in it and die for this meaningless war.”

This is the latest in a series of hacks conducted by the Belarusian Cyber-Partisans in their campaign against Belarus dictator Alyaksandr Lukashenka. Prior initiatives have seen them gain access to security service files, police databases of informants, and CCTV footage showing human rights abuses in Belarusian prisons.

The group’s activities are a reminder that opposition to the Lukashenka dictatorship continues despite the regime’s brutal crackdown on dissent over the past eighteen months.

Protests first erupted in Belarus on August 9, 2020 in the immediate aftermath of a deeply flawed presidential election. With unprecedented crowds taking to the streets in towns and cities across the country, it initially looked as though Lukashenka’s 26-year reign may be coming to an abrupt end. However, Russia soon intervened to prop up the regime, enabling Lukashenka to embark on a heavy-handed campaign to crush the country’s pro-democracy movement.

These terror tactics have proven effective in silencing opponents of the regime, but they have also robbed Lukashenka of legitimacy at home while making him an international pariah. Faced with a hostile domestic political climate and without friends on the international stage, the Belarusian strongman has become increasingly dependent on support from Moscow.

Lukashenka’s reliance on Russia has forced him to become directly involved in Vladimir Putin’s campaign against Ukraine and the Kremlin’s Cold War against the entire democratic world. This has marked a dramatic departure from the Belarus dictator’s previous efforts to play Moscow and the West off against each other in what was a skillful and long-running geopolitical balancing act.

When Russia invaded Crimea in 2014, Lukashenka pointedly refused to recognize Moscow’s claims to the Ukrainian peninsula and vowed to keep his country out of the unfolding conflict. In a sign of the new realities now facing Lukashenka, he recently declared that Crimea was Russian and vowed to personally visit the peninsula together with Putin.

In recent weeks, speculation has mounted over a possible Belarusian role in Putin’s threatened full-scale invasion of Ukraine.

The Russian leader has assembled a large invasion force around Ukraine, menacing the country from the south via Russian-occupied Crimea and to the east along the Russian border. By moving troops into Belarus, Putin has significantly expanded the encirclement of Ukraine and paved the way for a possible northern front that could play a vital role in a future attack.

A Russian invasion via Belarus would enable troops to enter Ukraine west of the River Dnipro without having to take on the logistically challenging task of a major river crossing. This would allow Russian forces to advance rapidly on the Ukrainian capital Kyiv. While Ukraine has hastily sought to enhance its defenses along the country’s 1000km northern border with Belarus, the Ukrainian military simply does not have the manpower to effectively repel a major Russian offensive from this direction.

The international community will be watching developments in Belarus closely over the coming weeks for any signs of preparations for an advance into Ukraine. Joint military exercises involving Russian military units are set to take place in southern Belarus close to the Ukrainian border.

This week’s Belarusian Railways cyber sabotage is a reminder that many Belarusians continue to oppose the Lukashenka regime while also resenting the presence of Russian troops in their country and wanting nothing to do with Putin’s war. If Lukashenka allows Putin to use Belarus as a gateway for the invasion of Ukraine, he will become a participant in the conflict even if he stops short of sending Belarusian soldiers to join the attack. This would have catastrophic consequences for the entire region and could also prove disastrous for Lukashenka personally.