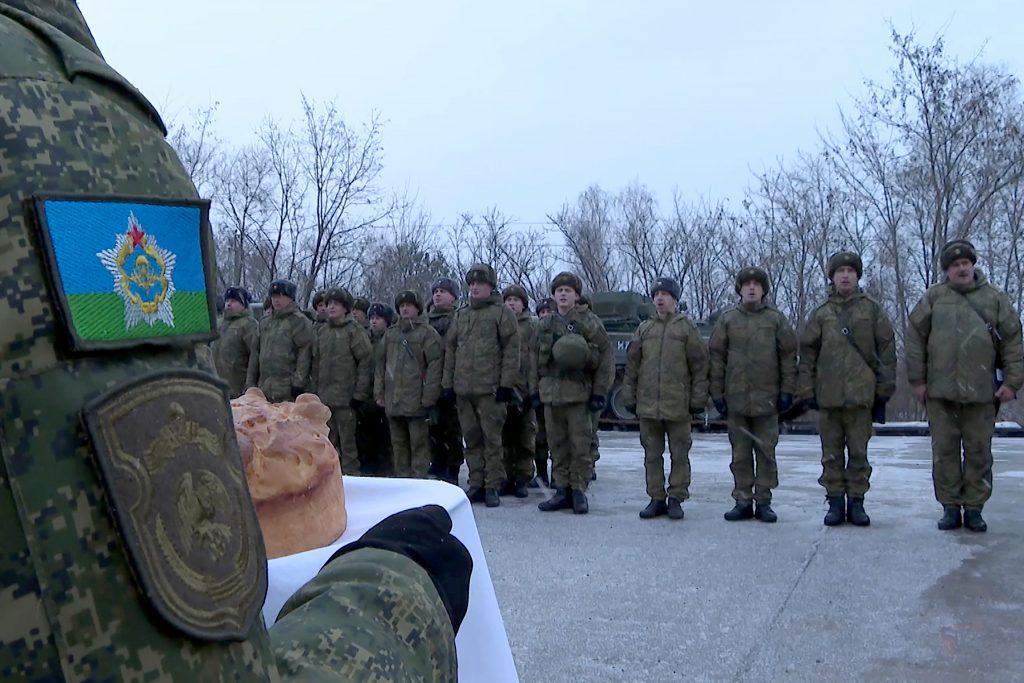 From military deployments to cyber attacks, Belarus is now clearly a full participant in Russia’s escalating campaign against Ukraine.

Russia began moving troops into Belarus this week, ostensibly in preparation for joint military exercises scheduled to take place in February. The exercises, named United Resolve, will reportedly be held in western Belarus near to the borders with Ukraine, Poland, and Lithuania.

The move came as Vladimir Putin’s Russia continued to concentrate an estimated 100,000 troops in areas close to its border with Ukraine and as Moscow steadily expanded its military footprint in Belarus. Russia said on January 18 that 12 SU-35 fighter jets, two divisions of S-400 air defense systems, and a division of Pantsir-S air defense systems were currently being deployed in Belarus.

The additional deployment of Russian forces to Belarus means that Moscow can now attack Ukraine from Russia in the east and southeast, from the annexed Crimean peninsula in the south, and from Belarus in the north.

Basing troops in Belarus provides Russia with one particularly important logistical advantage. It gives Moscow the ability to reach Kyiv, which is just 90 kilometers from the Belarusian border, without crossing the Dnipro River. Military analysts fear that if the Kremlin launches simultaneous offensives from the north, south, and east, such a multi-pronged attack could severely stretch Ukraine’s defenses.

Konrad Muzyka, director of the Poland-based Rochan consultancy, told Reuters that as a result of the growing Russian presence in Belarus, Ukraine will be forced to spread its troops thinner and divert forces from positions facing southwest Russia. “They don’t have enough manpower so they’ll have to make choices,” Muzyka commented.

Transforming itself into an armed platform and extension of Russia’s Western Military District is not the only way that Belarus is becoming a force multiplier for Moscow. As the military deployments continue, Alyaksandr Lukashenka’s autocratic regime also appears to be acting as Putin’s little helper in another one of Moscow’s favorite aggressive tactics: cyber attacks.

Serhiy Demedyuk, deputy secretary of Ukraine’s National Security and Defense Council, told Reuters that a hacking group known as UNC1151, which is reportedly connected to the Belarusian security services, was responsible for an attack on January 14 that posted threatening messages on Ukrainian government websites warning Ukrainians to “be afraid and expect the worst.”

“The defacement of the sites was just a cover for more destructive actions that were taking place behind the scenes and the consequences of which we will feel in the near future,” Demedyuk commented. He noted that UNC1151 had launched cyber attacks against Lithuania, Latvia, Poland and Ukraine in the past and stated that he suspected Russia was also involved.

In November 2021, the US cyber security firm Mandiant published a report claiming with “high confidence” that UNC1151 was connected to the Belarusian government and that it was behind the so-called “Ghostwriter” campaign, which targeted Eastern European countries with anti-US and anti-NATO disinformation while also stealing government credentials. The Mandiant report said it “cannot rule out Russian contributions to either UNC1151 or Ghostwriter,” noting that the group “has not targeted Russian or Belarusian state entities.”

In a January 13 article for Cyberscoop, Gavin Wilde of the Krebs Stamos Group and Justin Sherman of the Atlantic Council’s Cyber Statecraft Initiative noted, “US policymakers must recognize that growing cooperation and blurry distinctions between Russian and Belarusian security services will shape the cyber operations landscape.”

With US Secretary of State Antony Blinken visiting Kyiv this week to meet Ukrainian President Volodymyr Zelenskyy before heading to Geneva for talks with Russian Foreign Minister Sergei Lavrov, Ukraine is faced with the reality of aggression not just from Russia but from Belarus as well.

Lukashenka has already stated that Minsk “will not stand aside” in Moscow’s confrontation with Kyiv and has declared “it is clear whose side Belarus will take.” His actions in recent weeks appear to confirm that these comments were entirely serious.

As the centenary of the founding of the Soviet Union approaches later this year, Putin is engaging in a game of deadly brinkmanship. The Russian ruler has demanded that NATO agree to no additional eastward enlargement and cease all military cooperation with Ukraine, while also pledging not to station troops or weapons in the East European countries that joined the alliance after May 1997.

Moscow’s demands, which would amount to granting Putin a sphere of influence stretching across Eastern Europe, have been rejected as nonstarters by the US and NATO.

With little hope of a diplomatic solution to the current crisis, a full-scale Russian invasion of Ukraine looks to be an increasingly genuine possibility. And thanks to Belarus, the threat to Ukraine is now greater than ever.

Belarus dictator Alyaksandr Lukashenka has accused NATO of establishing military bases in Ukraine and has vowed to respond together with Russian President Vladimir Putin.

Image: Servicemen of Russia's Eastern Military District line up for a welcoming ceremony on January 19 as they arrive in Belarus to take part in joint military exercises. (Russian Defence Ministry/TASS via REUTERS)