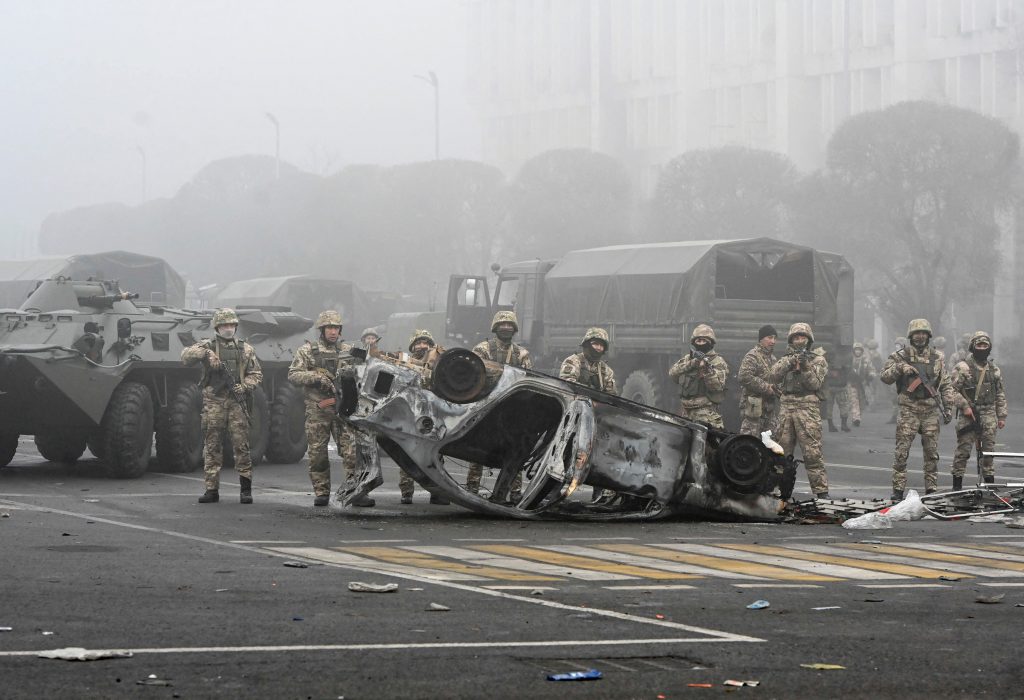 The dramatic recent events in Kazakhstan caught the international community by surprise and left analysts grasping for context. Confronted by the spectacle of mass protests against an authoritarian post-Soviet regime followed by a Kremlin-backed hard line response, many commentators inevitably made comparisons between the Kazakhstan crisis and the 2020 pro-democracy uprising in Belarus.

There are good reasons for arguing that the Belarus and Kazakhstan scenarios are not as similar as they might initially appear. At the same time, events in both countries reflect broader geopolitical currents that were set in motion by the collapse of the USSR three decades ago.

Among the first people to note the similarities between the drama in Kazakhstan and the Belarus protest movement were the Belarusians themselves. Footage from Kazakhstan sparked a lively debate within Belarusian circles, with some taking inspiration from the eruption of nationwide protests in the Central Asian country and reflecting on what lessons could be learned from Kazakhstan.

It remains far too early to draw any definitive conclusions regarding events in Kazakhstan. Furthermore, with a Russian-led military intervention currently underway, the crisis has now taken on an overtly international dimension that will further complicate any consequences. However, even at this early stage, it is possible to identity differences that make direct comparisons between Kazakhstan and Belarus problematic.

Whereas public anger in Kazakhstan erupted suddenly in early January, the protest movement in Belarus gathered momentum relatively slowly in the run-up to the country’s August 2020 presidential election. During the months prior to the vote, evidence of public opposition began to mount as the Belarusian authorities jailed leading independent candidates and forced others into exile. Much of the early opposition in Belarus took the form of digital activism and flash mobs, stopping short of the traditional threshold for anti-regime agitation. This made it possible for the protest mood to take root.

The immediate cause of the protests in Kazakhstan was economic, with high energy prices sparking widespread public anger. In contrast, the Belarus protest movement was political from the beginning, with demands for free and fair elections reflecting a broader democratization agenda.

As a result, the protests in Kazakhstan appear to have attracted a different core demographic compared to Belarus. While members of the working classes seem to have been the driving force behind the initial wave of anti-regime rallies in Kazakhstan, the dominant groups during the early days in Belarus were often drawn from the middle classes and civil society.

The speed and ferocity of Kazakhstan’s protest movement caught everyone off-guard, including the country’s authorities. This was not the case in Belarus, where a gradual build-up of pressure prior to the August 2020 presidential election afforded the regime an opportunity to plan a strategic response to likely protest actions. This led to preventative measures against potential protest leaders and efforts to strengthen the security apparatus.

The initial response of the Kazakhstani authorities to nationwide protests also differed from the early reaction in Minsk. While the Kazakhstan leadership made significant concessions on energy prices and attempted to shift public anger towards particular politicians by dismissing the government, Belarus dictator Alyaksandr Lukashenka adopted an uncompromising approach that actively sought to polarize society into pro- and anti-regime camps.

Perhaps the most striking and controversial difference between the movements in Belarus and Kazakhstan is the approach to physical confrontation. The 2020 pro-democracy uprising in Belarus has been praised and criticized for its unwavering commitment to peaceful protest. Advocates have always maintained that this stance was essential in order to secure domestic and international support, while critics have argued that the refusal to occupy buildings or fight back against heavy-handed police tactics was unrealistic when faced by the grim realities of a ruthless dictatorship.

There is considerable debate over the origins of the violent clashes that rapidly came to characterize the protest movement in Kazakhstan, with widespread allegations of government provocateur involvement or political intrigues. However, it seems clear that a significant number of protesters were ready to confront law enforcement if necessary, and sought to establish a physical presence rather than simply expressing their displeasure and returning home.

This has reignited the debate among Belarusians over the wisdom of the country’s strictly nonviolent approach. Would the movement have had a better chance of success if a permanent protest camp had been established and government buildings occupied in Minsk? We will never know. What we can say is that the approaches adopted in Belarus and Kazakhstan and the specific circumstances leading up to the protests have relatively little in common.

Despite the many differences between the two protest movements, comparisons remain tempting. In both cases, we see an authoritarian post-Soviet ruler being propped up by the Kremlin while employing overwhelming force against populations who are seeking more human rights and a greater say in government. In this sense, events in Kazakhstan and Belarus are both part of the same unfinished Soviet collapse.

Thirty years since the USSR ceased to exist, the aftershocks of empire continue to shape the geopolitical landscape from Minsk to Almaty. Events in Kazakhstan are a reminder to Belarusians of their own thwarted democratic aspirations and a symbol of the hunger for change that bubbles just below the surface across much of the former Soviet Union.

Image: Kazakhstani troops are seen on the main square in Almaty following protests against the government. January 6, 2022. (REUTERS/Mariya Gordeyeva)