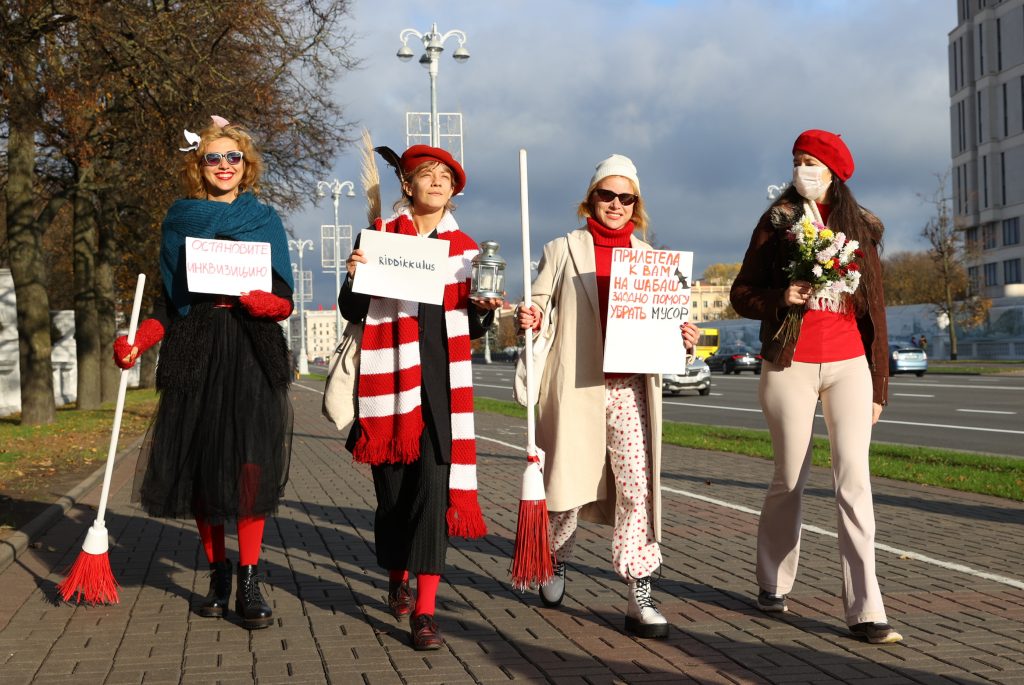 The Belarus People’s Assembly in Minsk on February 11-12 was a retro neo-Soviet affair. With the pomp and circumstance of a 1970s-vintage Communist Party Congress, strongman Alyaksandr Lukashenka assailed six months of protests against his autocratic regime as a Western-controlled “rebellion” to a room of nearly 3,000 handpicked loyalists under a banner reading Unity! Development! Independence!

Days earlier, on February 7, cities in Europe and North America marked Solidarity With Belarus Day at the request of exiled opposition leader Sviatlana Tsikhanouskaya with a series of creative and innovative public displays. These included a drone in Kyiv carrying the flag of the pre-Soviet Republic of Belarus; the facade of the Estonian parliament in Tallinn and the skies over the Latvian capital Riga lit up in red and white; and a giant flag unfurled and carried down the streets of Gdansk, Poland. Tsikhanouskaya also launched an online solidarity conference that showcased her launch of Belarusian People’s Embassies.

Something old, something new. And the contrast could hardly be sharper. But the disparity between the Lukashenka regime’s visible staleness and the opposition’s jubilance and freshness is about more than just optics. Political change in authoritarian regimes consists of an inside game and an outside game-the politics of the elite and the politics of the street. And what the events of the past several weeks reveal, above and beyond the contrasting visuals, is that the elite is tired, divided, and out of ideas, while the street is energized, invigorated, and innovative.

One sign that the Belarusian elite is less than united is the emergence of a group called By_Pol, a collective of former defense, intelligence, and law enforcement officials who have broken with the regime. The group works to expose regime abuses and encourage their former colleagues to join them.

This initiative took shape at a meeting in Poland in October 2020 between exiled security service officers and Tsikhanouskaya. Among other things, they have leaked information on their Telegram and YouTube channels exposing abuses against protesters, the existence of a special unit to assassinate opposition figures abroad, and plans to build barbed-wire bound internment camps for opposition protesters.

They are also using their Telegram channel to encourage current security officials to go into exile and leak information. “Any member of the Belarusian security forces can contact By_Pol through their Telegram channel. The organization will then provide them with assistance. Among other things, it can even help people leave the country through Russia and get to Ukraine or countries in the European Union. In total, By_Pol has helped more than 30 former security officials leave Belarus,” Meduza reported.

Andrey Astapovich, a former police investigator who is seeking asylum in Poland told Radio Free Europe/Radio Liberty that the group will continue to “collect evidence and document all the crimes of this regime, from the rigging of elections to police violence and extrajudicial murders.”

The schisms within the Lukashenka regime that the emergence of By_Pol has exposed are only part of the picture of a rapidly changing dynamic in Belarus. The other is visible on the streets, or more exactly in the courtyards, of Minsk and other Belarusian cities.

Faced with a harsh crackdown on street protests against the Lukashenka regime, the Belarusian opposition has turned their apartment blocks into epicenters of grassroots democracy. Writing for MBK Media, journalist Arina Kochemarova notes that Belarusian courtyard protests have become “places of change,” epicenters of civic engagement, and focal points of solidarity against the autocratic regime.

With concerts, flash mobs, and block parties, Belarusians are establishing a fledgling alternative civil society that can have an enduring influence on the country’s political life, much like the Solidarity movement did in Poland in the 1980s. The courtyard protests, which are often organized in encrypted Telegram chats, also pose problems for the police, who are typically unfamiliar with the layout of the apartment blocks, making it easier for opposition protesters to evade them.

The trend has already been noticed in Russia, where supporters of opposition leader Alexei Navalny have begun adopting the same tactic.

The resilient and adaptive tactics of the Belarusian street, combined with the emergence of the dissident law enforcement and security service veterans of By_Pol, together illustrate that the Lukashenka regime and its allies in the Kremlin have lost the initiative. The opposition is now setting the agenda.

Image: Over the past six months, Belarusian pro-democracy protesters have adopted a range of innovative tactics in order to defy a heavy-handed regime crackdown and make their voices heard. (Stringer/TASS via REUTERS)