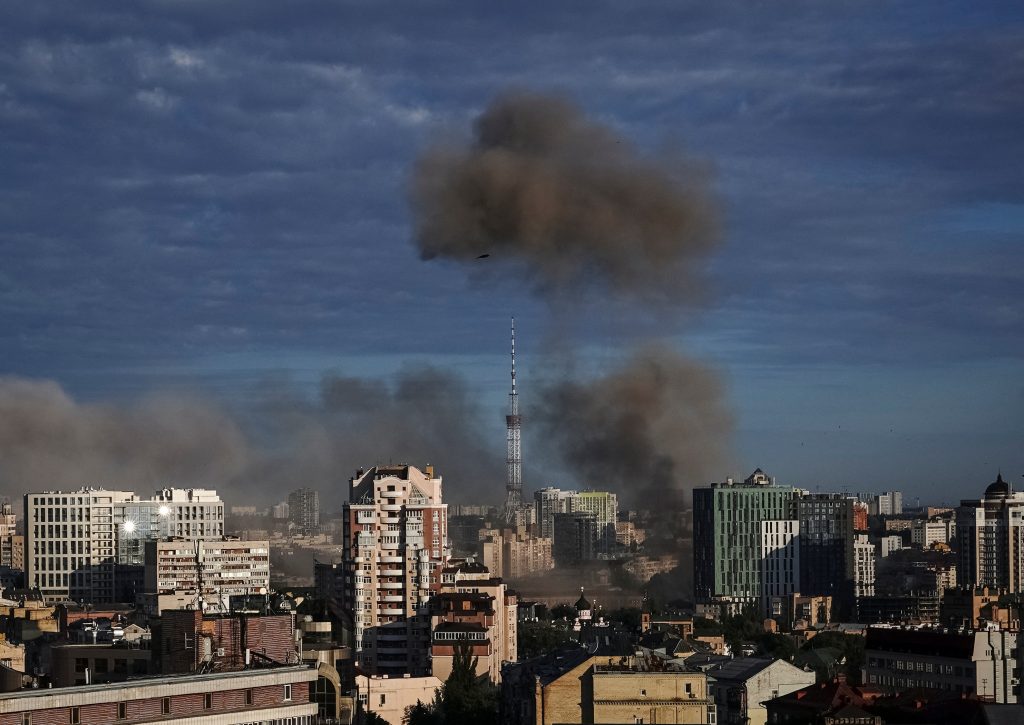 The axis of autocrats in Eastern Europe is also an axis of war criminals.

Russian air and missile strikes from Belarusian territory and airspace hit a Ukrainian kindergarten and an apartment complex on June 25. The attacks killed a 37-year-old man and injured his wife and seven-year-old daughter. Additionally, according to Ukraine’s northern military command, at least 20 rockets launched from Belarus struck the village of Desna, 70 kilometers north of Kyiv in the Chernihiv region.

“Russian bombers ‘worked’ directly from the territory of Belarus,” Ukraine’s Defense Ministry wrote in a post on its Facebook page, adding that six aircraft had launched 12 missiles from Belarusian airspace. “The strikes were carried out in Kyiv, Chernihiv and Sumy regions.”

The wave of air and missile strikes against Ukraine from Belarusian territory this past weekend are the latest indication that, despite frequent protestations to the contrary, Alyaksandr Lukashenka’s autocratic regime is a full and willing combatant in Vladimir Putin’s illegal war of aggression against Ukraine.

The strikes from Belarus came as Lukashenka and Putin met in Saint Petersburg. During their meeting, the Kremlin leader announced that Russia would soon transfer nuclear-capable Iskander-M missile systems to Belarus and also upgrade Minsk’s Sukhoi Su-25 fighter jets to allow them to carry nuclear weapons. Moscow and Minsk say the moves are ostensibly to counter an alleged threat to Belarus from Poland and Lithuania.

The bellicose moves by Russia and Belarus came as G7 leaders were meeting Germany and as NATO was preparing to hold its summit in Madrid. They also reflected rising tensions between Russia and Lithuania as Vilnius moved to impose European Union sanctions against Moscow by blocking the shipment of some goods to the Russian exclave of Kaliningrad.

Russia has already positioned its own Iskander missiles in Belarus. The Ukrainian General Staff announced on May 24 that Russia had deployed a division of nuclear-capable Iskander-M missiles to the Brest region of Belarus near the Ukrainian border. The missiles have a range of 400-500 kilometers, which puts large parts of central and western Ukraine within striking distance. Ukraine’s General Staff announced that in addition to the Iskanders, Russia has also deployed Pantsir-S1 anti-aircraft gun systems and S-400 anti-aircraft missile systems in Belarus.

Offering up Belarusian territory as a platform for Russia to kill Ukrainian civilians isn’t the only way Alyaksandr Lukashenka has become Vladimir Putin’s partner in war crimes. The General Staff of the Ukrainian Armed Forces announced on June 27 that Belarus is resupplying Russia’s war effort in Ukraine with ammunition. The most recent consignment involving up to 20 wagon loads of ammunition was recently sent to Russia’s Belgorod Oblast near the Ukrainian border.

Speaking after the latest escalation in deadly airstrikes, Ukrainian President Volodymyr Zelenskyy made it clear that Belarusians who aid and abet Putin’s aggression in Ukraine, from Lukashenka down to rank-and-file troops, would be held accountable.

“All pilots, dispatchers, mechanics, and other people who ensure the launch of missiles at Ukraine must understand: We will find you all. Each of you will be held responsible for these strikes. And if someone thinks they will evade responsibility by saying that they were just following orders, they are mistaken,” Zelenskyy said in a speech on June 26.

“When your missiles hit residential buildings, these are war crimes. Trial is what awaits you all. And there will be nowhere to hide for you, neither on the shores of the Caspian Sea, over which your missiles are launched, nor in Belarus. Nowhere.”

These latest attacks demonstrate not only that Lukashenka is a full and willing participant in Putin’s aggression against Ukraine and that his collusion with the Kremlin is escalating, but also that the two autocrats are conspiring to terrorize and kill innocent Ukrainian civilians. Both Putin and Lukashenka, as well as the relevant officials and soldiers in their respective chains of command, should be charged with war crimes, crimes against humanity, and possibly genocide.

The United States and its allies should also designate Russia and Belarus as state sponsors of terrorism. Zelenskyy has long asked Western nations to apply this designation to Russia. And a bipartisan group of US lawmakers in both the House and Senate have called on the administration of US President Joe Biden to do so.

Axis of autocrats versus democratic Europe

Vladimir Putin will pay a rare visit to his last remaining ally Alyaksandr Lukashenka in Belarus next week as the two dictators face the reality of mounting international isolation over the criminal invasion of Ukraine.