Chinese President Xi Jinping was in Riyadh from December 7 to 10, attending three summits and inspiring thousands of over-wrought headlines about what it means for the United States’ interests in the Middle East. Given the bad state of US-Saudi relations, it is natural to see Xi’s visit in the context of geopolitical competition between Washington and Beijing, but that framework misses the bigger picture. This trip was part of a much longer trajectory of deepening China-Middle East relations in which ties with several regional countries have become increasingly mature.

In the China-Saudi bilateral relationship, this is the fifth state visit for a Chinese head of state.  Each had resulted in a wider range of areas where the two countries cooperated, starting with Jiang Zemin’s 1999 visit when he signed a Strategic Oil Cooperation Agreement, eventually making China the top energy customer for the Kingdom. The previous one, a 2016 visit when Xi and King Salman signed a comprehensive strategic partnership (CSP) agreement, elevated the Kingdom to the highest level in China’s diplomatic hierarchy. Between the two trips, relations had grown to include a more varied relationship across trade, investment, financing, technological cooperation, educational outreach, and security.

The  US-Saudi relationship has been in a rough stretch. US President Joe Biden’s attempts to get it back on track with a visit in July did not deliver the hoped-for results, as evident in the OPEC+ decision to cut crude production, which was seen in Washington as “a jab at Biden.” However, linking Xi’s visit to Biden’s misses the many ways in which China and Saud Arabia have become important to each other. Despite former Secretary of State Mike Pompeo’s assertion, it is neither a result of “bad American policy” nor a matter of Riyadh hedging to get a better deal from Washington. The Saudis and their Gulf Cooperation Council (GCC) neighbors see China as a great power partner with a seat on the United Nations Security Council, a major energy market, and a source of technological support and investment that can help them build diversified economies. The relationship is far more than a trick to get America’s attention.

It could be easy to miss without focusing on China-Middle East relations over the past decade. Furthermore, the fact that these summits and their outcomes were reported as new developments does not help. The China-Arab States Summit on December 8 was hailed as a first, ushering in a new era of relations. In fact, the China-Arab States Cooperation Forum (CASCF) has held a ministerial meeting every two years since 2004, alternating between China and an Arab capital city. In each of these meetings, China and the Arab League member states charted out priority areas for cooperation for the next two years. The year 2022 was slated to see a CASCF meeting, but, instead, this summit was held, serving largely the same purpose.

Similarly, the China-GCC Summit appears to be a rebranding of the China-GCC Strategic Dialogue, which was first held in 2010. The China-Saudi CSP, re-announced during the summit, has been the backbone of the bilateral relationship for six years. This time, the innovation was to enhance it by agreeing to head of state meetings every two years.

Thus, for a casual observer of the Middle East, the three summits look like a Chinese full-court press into the region and can easily be misinterpreted as new and disruptive. In reality, they represent the latest stage of a presence that has been steadily growing over the past two decades.

In the opening address for the China-Arab States Summit on December 8, Xi outlined eight areas for “pragmatic cooperation”: development support, food security, public health, green innovation, energy security, inter-civilizational dialogue, youth development, and security and stability. Much of this has already been featured in existing frameworks. Furthermore, attendance among Arab League heads of state was modest and there were few major outcomes.

The China-Saudi Summit on December 9 was more impressive. The joint statement released at the conclusion of the summit demonstrates just how much the two countries already cooperate and their ambitions to continue “in all fields.” During the 2016 visit, the duo established the High-Level Joint Committee (HLJC), the steering mechanism for the CSP. Since then, the vice-chairs—Crown Prince Mohammed bin Salman on the Saudi side and Vice Premier Zhang Gaoli and Han Zheng on the Chinese side—have been meeting regularly, bringing delegations to sign several Memorandums of Understanding (MoUs), which become contracts at the next set of HLJC meetings more often than not.

After this summit, the Saudis reported that forty-six MoUs and agreements were signed, valued at $50 billion. Long-time observers of summitry will correctly wait to see how many of these become actual contracts. However, in the case of China-Saudi relations since 2016, the frequent follow-up meetings through the HLJC often result in tangible outcomes.

The China-GCC Summit generated the most interest. The headline for China was to announce the areas of cooperation for the next three to five years: oil and gas, finance and investment, innovation and new technologies, aerospace, and language and culture. Again, much of these have been promoted in cooperation through the Belt and Road Initiative or CASCF frameworks.

However, the more interesting takeaway was China calling for a peaceful resolution to “the issue of the three islands: Greater Tunb, Lesser Tunb, and Abu Musa.” Immediately after the British withdrawal from the Gulf in 1971, Iran seized the three islands that were previously administered by the Emirates of Ras al-Khaimah. This has been a point of contention between the United Arab Emirates and Iran ever since. That China chose to weigh in was unusual and has been interpreted as a betrayal in Tehran, which also has a comprehensive strategic partnership with China. Chang Hua, the Chinese ambassador to Iran, was summoned by the Iranian government to hear its displeasure over the issue.

Despite the general consensus that China and Iran are more natural partners than China and the GCC, Beijing siding with the Gulf monarchies should not be surprising either. China’s economic interests on the Arab side of the Gulf vastly outweigh those in Iran, and Tehran’s destabilizing behavior in the region threatens the stability that Beijing prizes.

Nevertheless, the series of summits is likely troubling for the United States. That its main strategic competitor is seen to be making serious gains in a region of geopolitical centrality—and with many of America’s key allies and partners—is a problem. Xi’s visit shows that China has a clear vision of what it wants in the Middle East and has articulated this vision and aligned it with the agendas of Arab states. The United States doesn’t have to beat China, but it does need to respond with its own positive vision of how the Middle East fits in its larger strategy while addressing the concerns of its Middle East and North Africa allies and partners. 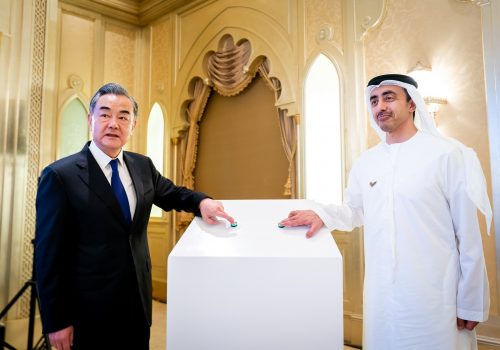