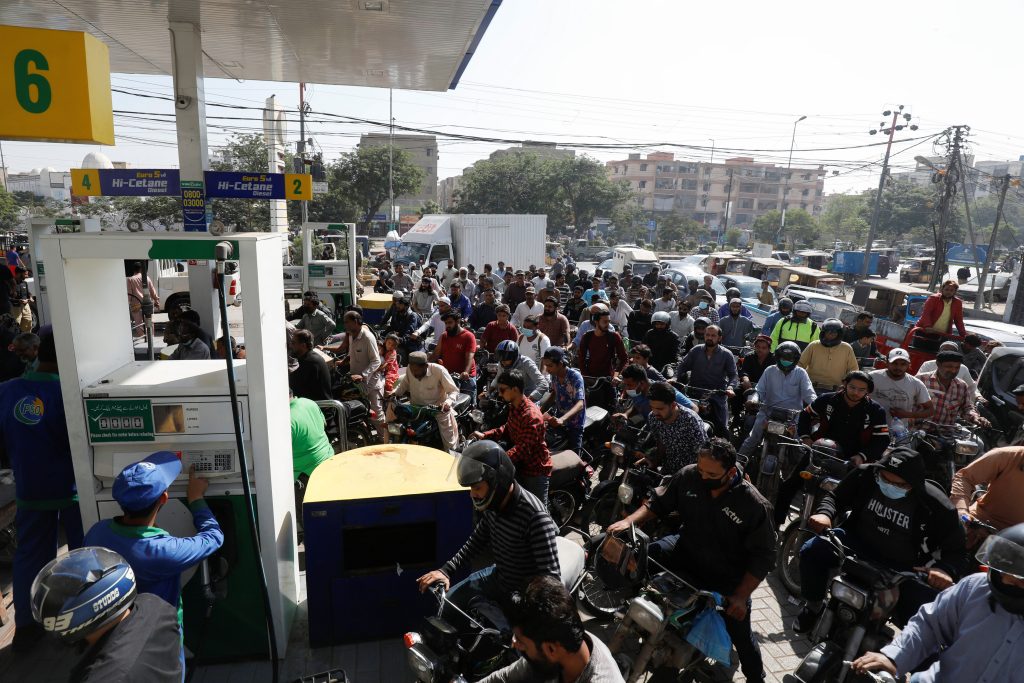 On February 28, 2022, Pakistani Prime Minister Imran Khan announced that his government would cut petrol and diesel prices by Rs. 10 per liter and electricity prices by Rs. 5 per unit. The prime minister in his speech also promised no further increases in energy prices until the 2023-2024 budget. These announcements come as the government faces pressure due to rising inflation and protests by opposition parties.

Here’s how Atlantic Council and other experts are reacting to the prime minister’s decision and its implications for Pakistan’s political economy:

The move is designed to claw back some political space in the face of mounting threats from the opposition.

The fuel and power price reductions are likely to produce a short term disinflationary impact, but eventually they could have the opposite effect if an appropriate financing plan is not in place to help meet their cost. If the moves end up derailing the fund program, this will be the second time the government has backed out of its commitments after receiving the money. The program was already dogged by questions over its ownership and these concerns are likely to be amplified now. Derailment of the International Monetary Fund (IMF) program will have strong ramifications for the exchange rate and foreign exchange reserves, eventually leading to another increase in inflation. A fund team is due within a week for the next review, so the timing of the move is very sensitive.

Clearly the move is designed to claw back some political space in the face of mounting threats from the opposition and messages coming to the prime minister from his own party leadership about the devastating impact that inflation has had on their electoral prospects. But whatever political space can be earned through these measures will be short-lived. One wonders if the government is aware that it is buying little more than a narrow window for itself with these steps. And if so, one wonders whether they intend to make their political move in this window.

Previous attempts to hold fuel prices steady via diktat have not lasted more than a few weeks. This time Khan has committed to holding them steady until the next budget. Khan was already on a high wire act between the demands of the IMF and his electorate. He has traded that in now, for a game of chicken with the financial markets and his creditors.

The current government differs not a bit from its predecessors in setting ad-hoc and wrong-headed economic policies that are sinking Pakistan further economically.

The prime minister’s decision to provide benefits of various sorts–lower fuel and electricity prices and subsidized loans and tax exemptions for selected sectors–continues a long and inglorious tradition of the country’s top leadership enacting policies erratically and in defiance of the most basic economic principles. The benefits announced will be celebrated briefly as “relief” but will further deteriorate Pakistan’s financial health, because they create a burden that its decrepit tax machinery cannot shoulder through prudent revenue collection elsewhere.

For an efficient economic system, it is essential that prices be linked directly to costs. When underlying costs rise, as they do when international commodity prices increase, the government cannot insulate the populace from higher domestic prices without creating a higher debt burden for future generations. Insufficient tax collection from broad swathes of the economy and a lack of productivity relative to other countries are at the core of our economy’s ailments. Either because of a lack of understanding amongst the top leadership or an unwillingness to start politically painful reforms, the current government differs not a bit from its predecessors in setting ad-hoc and wrong-headed economic policies that are sinking the country further economically.

It is ironic to note that the prime minister spent significant time talking about a free and independent foreign policy today. It takes a lack of financial dependency–healthy taxation and a lack of debt–and not a “clean” leader at the top to give Pakistan the freedom to act independently in global affairs. Beggars, even honest ones, are never independent.

Dr. Ali Hasanain is the Head of the Economics Department at the Lahore University of Management Sciences (LUMS) and a non-resident senior fellow at the Atlantic Council’s South Asia Center.

Today’s move will only add to the ballooning debt and current account deficit.

It’s confusing whether we’re witnessing a contractionary fiscal policy or an expansionary one. On one hand, the government passed a mini-budget that increased taxes, while on the other hand we have the prime minister making populist economic announcements. Today’s move will only add to the ballooning debt and current account deficit. The rupee will weaken and broader economic fundamentals will deteriorate in the coming weeks and months.

Additionally, lowering petroleum prices may not be able to taper down inflation the way the prime minister and his team expect and hope. Looking forward, there is the monetary policy committee meeting of the State Bank of Pakistan (SBP) next Tuesday. Despite the SBP signaling a pause in the tightening cycle, one expects the central bank to be more compliant in terms of the IMF’s expectations especially when the government is ignoring fiscal prudence.

Ariba Shahid is a business and economic journalist at Profit Magazine.

These decisions only further support the wide sentiment that the government is facing a lot of political pressure internally.

The incentives announced today seem almost incredible. They lack credibility and almost indicate a panic reaction to offer as a get out of jail card. Ad-hoc policy making seems to have become a standard operating guidebook for the government, which is why it has become difficult for other stakeholders such as investors to engage.

Perhaps the time to be smart on petroleum could have been when oil prices were in the negative (literally). It will be interesting to see how the newly independent SBP reacts to these announcements.

It is not uncommon for governments to offer such populist policies in their final year. Former Finance Minister Miftah Ismail (under the previous Pakistan Muslim League-Nawaz, or “PML-N” government) announced massive tax cuts during the last year of his government. However, 2022 is not technically an election year, meaning that these decisions only further support the wide sentiment that the government is facing a lot of political pressure internally.

Ali Farid Khawaja is the Chairman of KASB Securities, a leading stock brokerage firm in Pakistan.

Prices are downward sticky and any drop in prices will not taper down inflation, but it will definitely increase the fiscal deficit.

Populist economics have often failed, or have been a rather expensive solution to the problems facing Pakistan. Reducing petrol and electricity prices would trigger a deficit pile-up, which would be financed through more borrowing, which would further crowd-out private sector borrowing, and put upward pressure on interest rates. An already precarious fiscal balance would further deteriorate, while the ever-envied current account deficit would continue to widen.

Prices are downward sticky and any drop in prices will not taper down inflation, but it will definitely increase the fiscal deficit which would translate into higher prices in its own unique way. A carefully calibrated path of managing current account deficit over the last three years will be falling flat as the election year comes up. Similarly, the medium-term inflation target of 5 to 7 percent as mandated by the central bank is likely to remain a distant dream.

Ammar Khan is an economist and non-resident senior fellow at the Atlantic Council’s South Asia Center.

Humanitarian assistance is a temporary solution to a long-term problem in Afghanistan. To reduce aid dependency and give hope to a suffering population, it is essential that the economy remains somewhat functional and the Afghan currency holds some value.

On February 11, 2022, US President Joe Biden issued an executive order paving the way for the splitting of $7 billion in frozen funds controlled by the former Islamic Republic of Afghanistan. This move has caused significant controversy.

Image: People on motorcycles wait for their turn to get petrol at a petrol station, after Pakistan Petroleum Dealers Association (PPDA) announced a countrywide strike, in Karachi, Pakistan, November 25, 2021. REUTERS/Akhtar Soomro