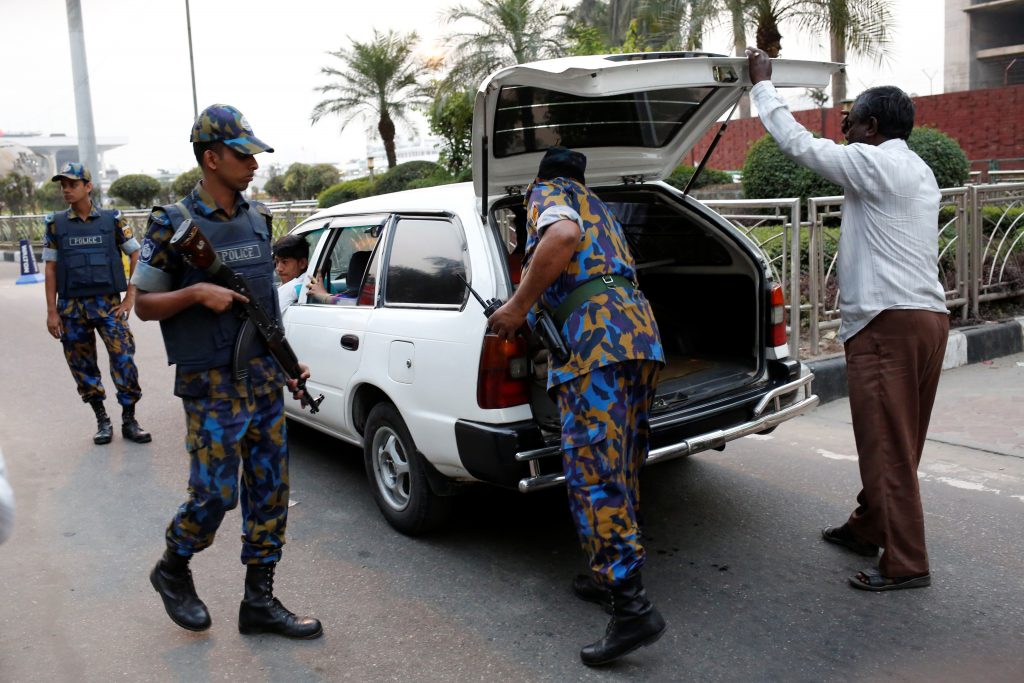 These actions came at the last day of the virtual Democracy Summit organized by the White House, to which Bangladesh was not invited. Both of these actions, and particularly the imposition of sanctions, have irked the government of Bangladesh. Dhaka summoned the US Ambassador to Bangladesh and expressed its discontent. Describing the allegations of human rights violations as “outlandish” and “regrettable,” the Bangladeshi government slammed the United States for leveling these allegations and imposing sanctions unilaterally. Thought Bangladesh has had a tumultuous history, a punitive measure against it of this scale is unprecedented.

The Rapid Action Battalion is an elite unit of the Bangladesh police. Founded in 2004 under the Bangladesh Nationalist Party (BNP) government led by Khaleda Zia, it also has officers seconded from the army, navy, and air force. The precursor to the RAB was a joint security operation between October 2002 and January 2003 of the army and other law enforcing agencies called Operation Clean Heart. During the operation, at least 44 people died in custody and hundreds were injured. Those who participated in the operation were provided indemnity by the parliament. The unit, initially comprised of 5,500 men in 2005, currently has at least 15,000 members, including officers, and is divided into 15 battalions.

In the early days, Prime Minister Khaleda Zia praised the force for “conducting a courageous and non-partisan campaign for curbing terrorism.” Although its tactics were highly questionable, the RAB initially earned popularity, thanks to public distrust of the criminal justice system at the time. The opposition Bangladesh Awami League (BAL), however, was critical of the force, alleging in 2005 that the RAB has “blatantly disregarded constitutional provisions, human rights laws, as well as court law.” In 2008, the BAL in its election manifesto promised to end extrajudicial killings, an implicit reference to the RAB’s actions. When the BAL came to power in 2009, however, there were discussions in diplomatic circles that the RAB may be disbanded. Despite this, both the US and Indian envoys agreed that the force should not be disbanded.

Over the years allegations against the force mounted and by 2014, Zia called for its disbandment. But by then extrajudicial killings became synonymous with the RAB, although other forces were trying to catch up. The ruling BAL became an ardent supporter of the force; on the one hand, it repeatedly claimed that there were no instances of extrajudicial killings, while on the other hand, a cabinet minister controversially said that “a bit of crossfire is needed.”

Within two years of its founding, international human rights organizations alleged that the RAB was engaged in unlawful killings and enforced disappearances. Reports by Human Rights Watch and Amnesty International published in December 2006 and 2009 documented allegations and underscored the impunity enjoyed by the force. In a 2010 court case in the United Kingdom, the British government faced challenges for its support of the RAB as leaked diplomatic cables revealed the involvement of the United States and United Kingdom in training the force. Calls for independent investigations into these allegations began in 2011, and in 2017 a UN body blasted the government for continued extrajudicial killings. Despite this, Dhaka continued denying the allegations while the incidences increased manifold.

Subsequently, some began to suggest that western countries should take punitive actions. In October 2020, ten US senators wrote a letter to then Secretary of State Mike Pompeo and Secretary of Treasury Steven Mnuchin calling for sanctions against RAB officials. In the United Kingdom, the Guernica 37 Chambers law offices made a formal submission to the British Foreign, Commonwealth and Development Office in August 2021 recommending sanctions for 15 current and former senior RAB officers. On August 31, 2021, the Tom Lantos Human Rights Commission held a virtual hearing on enforced disappearances in Bangladesh where several witnesses suggested taking punitive action. At the same time, the representative of the Bangladeshi government questioned the sources of the HRW report.

Do the United States and United Kingdom bear some responsibility?

While international human rights groups have been expressing concerns since 2006 and local groups such as the Odhikar documented a growing number of enforced disappearances since 2009 and extrajudicial killings since 2004—allegedly by the RAB—several Western countries provided support to the RAB and worked closely with it. Western governments had viewed the RAB as a key force against terrorism. All actions of the force were viewed through the prism of counterterrorism, thanks to the post-9/11 so-called Global War on Terror (GWOT). In some measures, it was justified as an inconvenient reality. In 2009, the US Ambassador in Dhaka James Moriarty described the RAB as the “country’s premier counterterrorism force” and opined that it is “best positioned to one day become a Bangladeshi version of the US Federal Bureau of Investigation.”

US diplomatic cables leaked in 2010 show that the US government was aware of the allegations as early as 2005. On June 5, 2005, Political and Economic Counselor D.C. McCullogh and Resident Legal Advisor met then Additional Director General Chowdhury Fazlul Bari, who described “crossfire,” a euphemism for extrajudicial killing, as “a necessary, short-term expedient.” A 2009 cable informs that the United States was providing human rights training. The United Kingdom provided training including “investigative interviewing techniques” and “rules of engagement” at least between early 2008 and March 2011. As for human rights training, a British newspaper quoted the Head of Training of the RAB in 2010 that he was unaware of any human rights training at RAB.

Furthermore, in 2019 the United States approved RAB officials “to travel to the United States to receive training in ‘Location-Based Social Network Monitoring System Software.”  These trainings were provided a year after the RAB was engaged in a war on drugs which cost hundreds of lives. Interestingly, the US government’s main concern, as described in an Office of Foreign Assets Control (OFAC) statement, was extrajudicial killings, as “part of the Bangladeshi government’s war on drugs.” The State Department sanctioned two officials for their involvement in the “extrajudicial killing of Teknaf City Municipal Councilor Ekramul Haque,” though US collaboration with the RAB continued after the killing took place in 2018.

Since the announcement of the sanctions, the obvious question has been what prompted the Biden administration to act. Three factors are likely behind recent US actions regarding Bangladesh. First, the worsening human rights situation in Bangladesh. In the past year, the incumbent government has tightened its grip over politics and administration and the incumbent’s penchant for coercion has become palpable. Second, the Biden administration has made a clear commitment to fighting authoritarianism and violations of human rights, seeking a clear departure from the Trump-era foreign policy of isolationism and support for authoritarian rulers around the world. Third, there are increasing US interests in the region due to the growing geopolitical and geostrategic importance of South Asia, including Bangladesh.

In particular, the geo-political factor seems to have accelerated the decision-making process. In recent years, the United States was indicating that it would like to see Bangladesh as a close partner in the region. Besides its longstanding security cooperation, particularly in counterterrorism, US-Bangladesh trade relations have been very significant. A description of Bangladesh as “an emerging partner” in the 2019 Indo-Pacific Strategy document, a call from then Defense Secretary Mark Esper in September 2020 to discuss military cooperation, and the visit of then US Deputy Secretary of State Stephan Biegun in October 2020 when he described Bangladesh as the centerpiece of the Indo-Pacific Strategy (IPS), clearly indicated that Washington is expecting Bangladesh to join the IPS. Simultaneously, however, Bangladesh’s growing relationship with China, especially after joining the Belt and Road Initiative (BRI), makes evident the fact that Bangladesh will soon be caught in a geopolitical tug-of-war between Washington and Beijing. Although Bangladesh wasn’t formally invited to join the Quadrilateral Security Dialogue (QUAD), Chinese Defense Minister Gen. Wei Fenghe in April 2020 and Chinese Ambassador to Dhaka Li Jiming in May 2020 warned Bangladesh against joining the group. In the face of aggressive Chinese postures and the increasing ideological leanings of the BAL towards the Chinese model of governance and economic development, the Biden administration decided to act.

Many are wondering whether these sanctions are one-off actions on the part of the United Sates as well as if they will be widened in the future, particularly if the Bangladeshi government decides to ignore them. There are also apprehensions about whether these actions will backfire for US interests, pushing Bangladesh to the arms of Beijing. These are to be seen in the future. But, since the imposition of sanctions, the Bangladeshi government, the ruling party, and its supporters have been engaged in a habitual denial and doubled down on their claim that the RAB has not violated human rights. The denial of blatant and ongoing human rights violations in the forms of extrajudicial killings and enforced disappearance by state actors may placate the ruling party and its leaders, but it will hardly convince the international community. Other western countries are yet to join the US, but there is no guarantee that they won’t do so in future. Undoubtedly, the sanctions have dealt a serious blow to the country’s reputation and the US-Bangladesh relationship, and ultimately may complicate their security cooperation and trade relationship.

For the moment, instead of engaging in a verbal fight and claiming that all is well in the human rights domain, Bangladesh should review the role of the RAB and overall human rights situation in the country. A starting point could be the implementation of the 2019 recommendations of the UN Committee Against Torture (CAT), which includes independent investigations into the allegations. Government’s actions will speak louder than anything else. If the government has nothing to hide, as it repeatedly claims, it should not be afraid to cooperate with the UN body and implement its recommendations.

Dr. Ali Riaz is a non-resident senior fellow at the Atlantic Council’s South Asia Center and a distinguished professor at Illinois State University.

Image: Security personnel check a car in the Hazrat Shahjalal International Airport as Bangladesh government proclaimed red alert in all airports and prisons across the country after an unidentified suicide bomber died inside a makeshift camp of Rapid Action Battalion (RAB) in Dhaka, Bangladesh, March 17, 2017. REUTERS/Mohammad Ponir Hossain