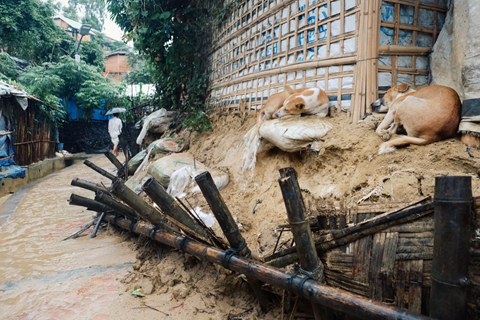 For the past twenty years, June 20 has provided an occasion for the global community to recognize and honor the strength, struggles, and resilience of refugees. Now, two decades after it began, and 70 years since the 1951 Convention relating to the Status of Refugees, World Refugee Day must be more than words. It must be a catalyst for urgent action to address the rights of people forced to flee.

Here in Bangladesh, Rohingya refugees have seen four Junes come and go since they escaped genocide in Myanmar. Each year, many from among the 900,000 refugees living in Cox’s Bazar have used the day to draw attention to their situation, advocating their right to live with respect and dignity in Cox’s Bazar until they are able to freely make the decision to safely return to Rakhine in the future. The Rohingya diaspora has added to these voices, directly lobbying governments and non-government organizations around the world to share responsibility for the crisis.

However, over the past four years, little has changed in the material reality of their lives. People continue to live in shelters, not homes. They live in overcrowded spaces and muddy streets, not in safe communities. Many Rohingya refugees have endured one catastrophe after another. Multiple fires have left a trail of devastation and dread; a pandemic has ripped through the fabric of communal life; families have been separated; and the coup in Myanmar has made the prospect of repatriation dangerous and uncertain. Through it all, they have had little to no influence on the decisions and events that shape the trajectory of their prolonged displacement, concurrent with sharply deteriorating conditions in the camps themselves.

In Cox’s Bazar during the summer, it rains almost every day for hours. The rain washes downhill and pools in the valleys below, where it gathers and picks up pace before pouring into narrow canals and out into the sea. Almost one million Rohingya refugees live in this natural floodplain, with families spread out over an intricate network of camps connected by muddy roads and makeshift bridges. The bamboo and tarpaulin shelters that dot the landscape rest on bare earth, some balanced on hills as steep as 45 degrees. When it rains—as it has for the past week—shelters flood, drinking water gets contaminated, important documents are damaged or lost, roads disappear under the deluge, and camps are cut off from each other as well as from vital humanitarian aid.

Too often, the ground itself gives way. On June 6, three Rohingya refugees were tragically killed by landslides after heavy rains the night before. With rain forecasted for the next week, the risk of more landslides remains high. Muhammad, a Rohingya youth leader, tells me that people are scared. “We don’t know when the next shelter will collapse,” he said, “I used to like the rain; now it makes me anxious.” When I visited the camps recently, it was raining again. In Balukhali camp, a massive fire that killed at least 15 refugees and displaced over 48,000 in late March had left its mark. Everywhere one looked, bare trees overlooked the burnt skeletons of former bamboo and tarpaulin shelters. Refugee volunteers—without whom rebuilding would be impossible—trekked through narrow, waterlogged pathways with shafts of bamboo. On each side, shelters stuck out like jagged teeth, the ground beneath them slowly falling away in the rainwater.

For four and a half years, Rohingya refugees have lived and died here waiting for the world to act. Aid organizations, including the Norwegian Refugee Council where I work, continue to provide lifesaving assistance for the community, but more must be done. Children, youth and adolescents who make up half of the refugee population have no access to formal education. Dispute resolution between refugees, and between refugees and the host community, remains woefully under-addressed. Women and girls remain acutely vulnerable to gender-based violence.

Despite escalating need, donor support has dwindled with each passing year. Most recently, the United Kingdom has cut aid by 40%, a move that will have catastrophic consequences for close to a million people with more than half of them children and youth. But while donors can move on, refugees cannot.

Rohingya refugees are exceptionally resilient, but this resilience too has its limits. Recognizing and honoring refugees is not enough. This year, World Refugee Day must be about more than platitudes and celebration. Governments, donors, multilateral organizations, and NGOs must commit to listening to refugees, providing for their needs, and allowing them to shape the direction of their own lives. It must trigger actions that ensure the Rohingya—and indeed all refugees—can live a life of dignity, respect, and opportunity.

Imrul Islam is the Advocacy Manager for the Norwegian Refugee Council in Bangladesh.