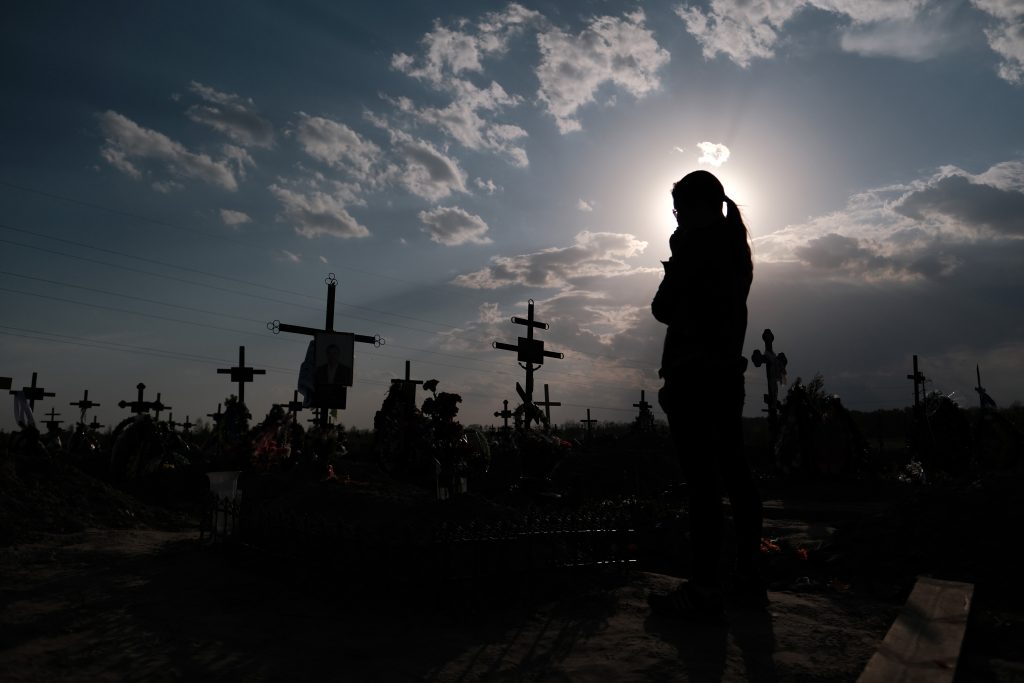 The Russian invasion of Ukraine has been made possible by one of the most comprehensive disinformation campaigns in world history. For years, Vladimir Putin has exploited longstanding anti-Ukrainian prejudices within Russian society and widespread international ignorance of Ukraine to set the stage for today’s conflict. He has succeeded in convincing millions of Russians and a surprising number of outside observers that Moscow’s unprovoked attack on Ukraine is both historically legitimate and geopolitically justified.

In reality, Putin’s war is the most unapologetically imperialistic undertaking of the twenty-first century. The Russian dictator seeks to annex entire regions of Ukraine while eradicating all traces of Ukrainian identity and statehood. In order to disguise this genocidal agenda, he employs a range of propaganda myths that have deep roots in the Russian imperial consciousness and reflect modern Russia’s refusal to recognize the reality of an independent Ukraine.

Putin’s favorite myth is the notion that Ukrainians are actually Russians and form part of an indivisible whole (“one people”). In July 2021, he published an entire essay in support of this argument entitled “On the Historical Unity of Russians and Ukrainians.” This remarkable document brought together many of Putin’s most shameless distortions including the claim that Ukrainians traditionally saw themselves as Russians and the assertion that modern Ukraine was established on historically Russian lands. “I am confident that true sovereignty of Ukraine is possible only in partnership with Russia,” he wrote. “For we are one people.”

In normal circumstances, it would be tempting to dismiss Putin’s pseudo-scientific imperial narrative as the harmless rant of a delusional dictator. However, his historically illiterate essay was no laughing matter. It was subsequently made required reading for all Russian military personnel and is now widely regarded as an unofficial declaration of war against the continued existence of an independent Ukraine.

Putin is not the first Russian ruler to insist Ukrainians are in fact Russians. Similar arguments were common during Czarist rule when much of today’s Ukraine was incorporated into the Russian Empire. This continued in modified form throughout the Soviet era with Ukraine and Russia typically portrayed as “brotherly nations.”

Over the past two decades, Putin has taken this propaganda trope to new extremes. He has weaponized the “one people” narrative to demonize any Ukrainians who insist on a separate identity, while at the same time portraying today’s Ukraine as an “anti-Russia” that can no longer be tolerated.

Unsurprisingly, the “one people” concept was always far more popular among Russians than Ukrainians. In the aftermath of Putin’s essay, polls found that an overwhelming majority of Ukrainians rejected his claims of historical unity between the two nations. Following the full-scale invasion of their country, the percentage of Ukrainians who now view Russians as a “brotherly nation” has become vanishingly small. With tens of thousands of Ukrainians killed and entire cities reduced to rubble, the myth of “one people” is officially dead.

Putin’s promotion of fraternal narratives has always been a way of expressing his territorial claims to Ukraine. Legitimizing these claims means whitewashing centuries of imperial oppression. While the close geographical proximity of the two countries means that they inevitably share many features of a common past, the story of Russia’s relations with Ukraine has always been defined by Russia’s aggressive expansion and Ukraine’s struggle for independence.

For hundreds of years, Russian rulers suppressed Ukrainian statehood aspirations while ruthlessly russifying the country. The reigns of Peter the Great and Catherine the Great were marked by particularly gruesome atrocities, but there was no single period when Ukrainians were not subjugated in their own land. Indeed, as long ago as 1731, French writer Voltaire was moved to observe, “Ukraine has always aspired to be free.”

Efforts to eradicate Ukrainian identity accelerated during the Soviet era. The early Bolsheviks brutally crushed the fledgling Ukrainian state established in 1918 amid unprecedented bloodshed in Kyiv and other Ukrainian cities. Stalin’s reign then saw the mass murder of Ukraine’s intellectual leadership. The darkest period of all came in the early 1930s when the Soviet authorities engineered a genocidal famine to wipe out the agrarian communities that had for centuries served as the traditional repositories of Ukrainian national culture. An estimated four million Ukrainians starved to death.

Putin makes no effort to address or excuse these staggering crimes. On the contrary, he simply ignores them while portraying periods of enforced cohabitation as evidence of eternal brotherhood.

Sadly, international audiences still sometimes struggle to grasp the scale of Putin’s cynicism and continue to repeat the Kremlin’s “one people” propaganda. In April 2022, French President Emmanuel Macron stated that he still considers Russians and Ukrainians “brotherly peoples.” Others have echoed Russia’s fraudulent historical claims to advocate for appeasement or undermine international support for Ukraine.

This needs to change. There should be no more talk of a compromise peace or attempts to placate Putin while Moscow is engaged in the genocide of the Ukrainian nation. Instead, the international community must be unambiguous in its rejection of Russian falsehoods and historical distortions.

Putin’s invasion of Ukraine relies heavily on a series of myths that reflect modern Russia’s failure to break with its imperialistic past. While the rest of Europe underwent decades of turbulent decolonization following WWII, Russia still clings to an anachronistic imperial identity that prevents its own development while exposing its neighbors to the horrors of colonial conquest. The current war in Ukraine is a throwback to an altogether darker era and a painful reminder that if Europe wants lasting peace, it must work toward a post-imperial Russia.

Nestor Barchuk is international relations manager at the DEJURE Foundation.