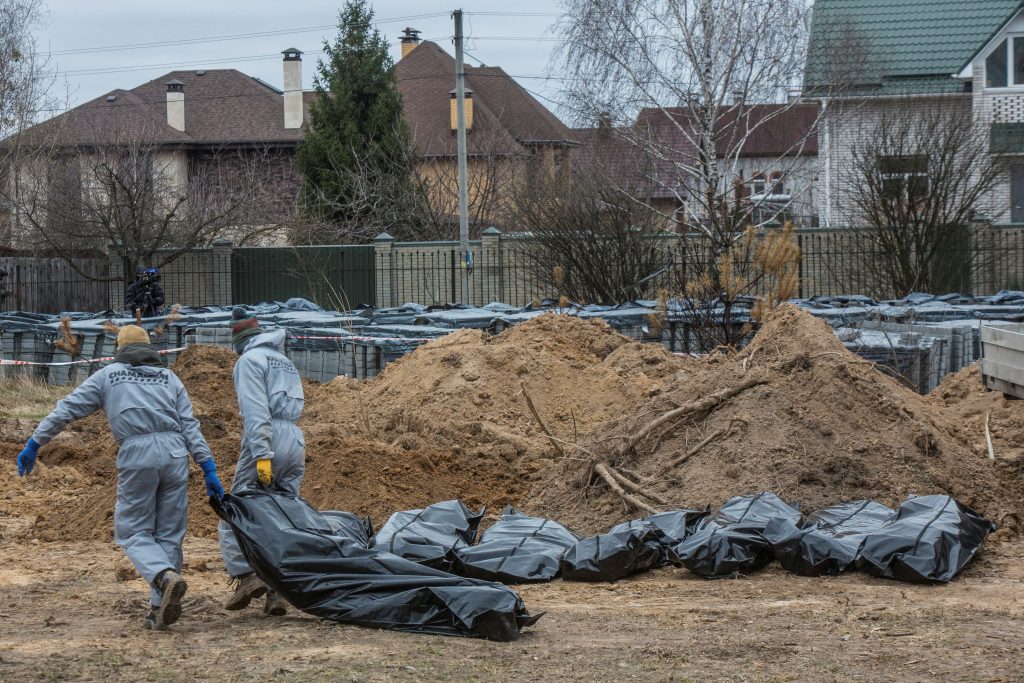 Half a year ago at the Babyn Yar Holocaust Memorial Center in Kyiv, we commemorated 80 years since the mass shooting of Ukrainian Jews by German soldiers. I had the honor of speaking after three heads of state including the President of Germany.

President Frank-Walter Steinmeier, whom I respect very much for his commitment to European values, named the lessons Germany had learned from its Nazi past. “We Germans know about our responsibility. It is a responsibility that does not end,” he commented.

The Federal President spoke about international law and human dignity, individual freedoms, and a peaceful and secure Europe. “This basis we must protect. This is also part of our responsibility related to our history,” he stated. “If the evil demons of the past show themselves today in new clothes, then for us Germans, there can be only one answer: Never Again! The fight must continue.”

Unfortunately, the Germany I see today is not the country of “Never Again.”

Russia has attacked a peaceful neighbor. It bombs and kills thousands of civilians. It starves the inhabitants of blockaded cities and lets them die of disease. Russian troops commit mass executions of Ukrainians that are visually reminiscent of the Babyn Yar killings. For almost two months, Germans have watched this nightmare unfolding on the news in real time.

Yes, Germany implements sanctions while providing humanitarian aid and also weapons, which was unimaginable not so long ago. But today, half a year after President Steinmeier’s powerful and confident declaration of “Never Again,” it is Germany that now blocks the implementation of sanctions to exclude Russian banks from the SWIFT payment system. It is Germany that does not want to introduce an immediate embargo on Russian oil, coal, and gas because the German economy will suffer. Germany is also dragging its feet over the delivery of heavy weapons that Ukraine desperately needs.

I understand that to be in a position to do the right thing tomorrow, Germany must remain economically strong. I am a realist. But “Never Again” means not only speaking out against Swastikas. It means fighting with all of your strength against mass killings, war crimes, and genocide. I believe Germany must do everything it can and must be ready to take risks. There is no easy way to defeat evil and end the atrocities taking place in Ukraine without some degree of risk and sacrifice.

You have let evil become too strong. You have made a lot of money on the way, albeit in good faith. Nevertheless, because of your history and because of your recent earnings, I think it is right for you to step up and acknowledge that this good faith was a grave mistake that is costing lives. With this acknowledgement comes special responsibility.

What are you waiting for? Chemical weapons attacks in a country 700km from Germany? Tens of thousands more Ukrainian civilians killed by artillery bombardments? The use of nuclear weapons? While you work out what is necessary before you really commit, I would like to make some suggestions for future speeches by senior German politicians.

I am well aware that my reaction is emotional because I am a Ukrainian Jew and I used to believe in the new Germany. I am also aware that I cannot present the perfect way forward. Nevertheless, let me depict the truth about today’s Germany as I see it.

Back then, Germans were perpetrators. Germans committed the Holocaust. Now, Germans also bear responsibility. You are allowing war crimes to happen. Eighty years after the Nazi genocide in Ukraine, you are not doing everything you can to stop a new Russian genocide from taking place in Ukraine. This is not “Never Again” and it is not enough.

I implore you to act with the necessary urgency to stop the Russian war machine. Please demonstrate that nothing is more important to Germans than defending freedom and life against oppression and death. Remind the world that when Germans say “Never Again,” they mean it.

Victor Pinchuk is a businessman, philanthropist, and the founder and member of the board of Yalta European Strategy. He is also a member of the Atlantic Council’s International Advisory Board. The Victor Pinchuk Foundation is a donor to the Atlantic Council. This article is an edited English-language version of a German-language article published by Frankfurter Allgemeine Zeitung on April 14. An English-language version has also been published by Evropaiska Pravda.

President Zelenskyy has called for the wholesale reform of the United Nations in an emotional address to the UN Security Council marked by scathing criticism of its toothless response to Putin’s invasion of Ukraine.