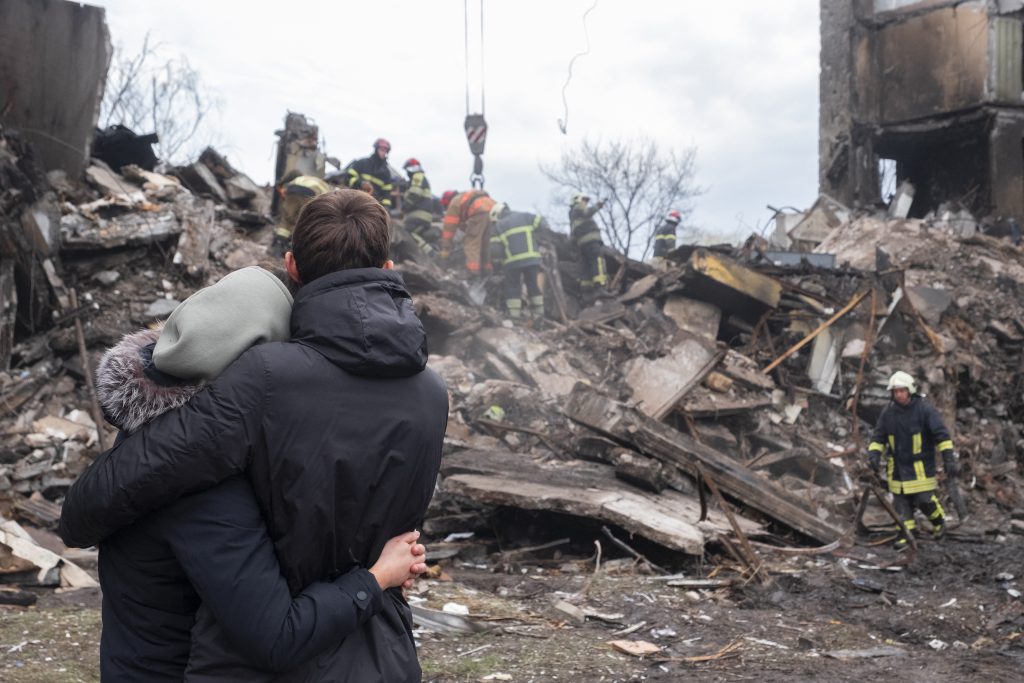 Russian war crimes in Ukraine have made global headlines, but the systematic damage being inflicted on the Ukrainian economy by Putin’s invasion also requires urgent international attention. In a recent address to the EU’s Economic and Financial Affairs Council, Ukrainian Finance Minister Sergii Marchenko provided details of the “catastrophic” costs of the conflict so far, while also calling for greater international economic support for Ukraine and tougher sanctions measures against Russia.

Speaking on April 5, Marchenko shared a number of data points that illustrated the scale of the economic damage done to Ukraine during the first 40 days of the Russian invasion. According to Marchenko, Russian forces have methodically targeted transport, energy, and industrial infrastructure across the country, resulting in damage amounting to hundreds of billions of dollars. Around 30% of all Ukrainian businesses have been forced to cease activities entirely, while many more have had to dramatically downgrade operations due to limited access to resources or markets.

Marchenko also noted the negative impact of the Russo-Ukrainian War on the global economy. In particular, he underlined the growing international food security issues arising from Putin’s invasion. This emphasis on agriculture comes as no surprise given Ukraine’s status as the world’s number one sunflower oil exporter and leading grain supplier, with an estimated 400 million people globally dependent on Ukrainian grain.

Over the past decade, Ukraine has consolidated its position as an emerging agricultural superpower and key contributor to global food security. With the bulk of Ukrainian agricultural exports now unable to reach international markets, the consequences are expected to be widespread and severe. Countries from North Africa to South America will feel the loss of Ukrainian agricultural produce, with price hikes on basic commodities and food shortages potentially fuelling social unrest and political instability.

As the Ukrainian authorities struggle to keep the country’s economy afloat while maintaining basic social payments, Marchenko told his EU EFAC audience that the time has now come for a “more ambitious fundraising exercise.” This should involve a major short-term increase in grants ahead of the vast financing initiative that will inevitably be required once the work of national reconstruction begins, the Ukrainian Finance Minister explained.

Marchenko’s warnings of potential Ukrainian economic meltdown are no exaggeration. A World Bank report issued on April 10 estimated that the Ukrainian economy could contract by as much as 45.1% during 2022, with the authors noting that “the magnitude of the contraction will depend on the duration and intensity of the war.”

The World Bank report also echoed Marchenko’s call for urgently upgraded international funding. “Ukraine needs massive financial support immediately as it struggles to keep its economy going and the government running to support Ukrainian citizens who are suffering and coping with an extreme situation.”

Russian efforts to undermine the Ukrainian economy should not be viewed as a mere byproduct of Moscow’s military campaign. On the contrary, economic attacks are a central element of the Kremlin plan to weaken Ukrainian statehood and force the country back into the Russian orbit. Putin has frequently made clear that he does not recognize Ukraine’s right to exist as an independent state. In order to break Ukrainian resistance, he now seeks to deprive the country of the ability to function economically.

As the Russian invasion has unfolded over the past seven weeks, the economic aspects of Putin’s offensive have become increasingly apparent. While Kremlin officials frequently claim that Russian airstrikes and artillery bombardments are restricted to military objectives, in reality Ukrainian factories, warehouses, and economically important elements of national infrastructure have repeatedly been targeted and destroyed.

In the south, Ukraine’s ports have been subjected to a naval blockade imposed by the Russian Black Sea Fleet. This has done much to cut the country off from global markets. The Ukrainian economy relies heavily on agricultural and industrial exports, most of which traditionally flow through Black Sea ports such as Odesa. Meanwhile, as the agricultural planting season gets underway, farmers in unoccupied parts of Ukraine are reporting problems due to a lack of international equipment that would usually arrive via the country’s southern ports.

There are signs that the international community recognizes the magnitude of the economic challenges facing Ukraine and appreciates the importance of providing the country with a financial lifeline. The World Bank has pledged USD 1.5 billion to help keep critical government services running. Other institutions and partners such as the European Union have also committed additional funding.

It is vital these efforts continue. Ukrainians have demonstrated remarkable courage and skill in defending their country against the military might of Russia, but they desperately need increased international financial support in order to keep their economy afloat. Putin’s initial blitzkrieg in Ukraine may have failed, but his plan to bankrupt the country plays an important part in Russia’s ongoing war against Ukrainian statehood and must not be allowed to succeed.

Memo to Macron: Putin’s Ukraine genocide is not the act of a brother

French President Emmanuel Macron has refused to describe the mass killing of Ukrainians by Russian soldiers as genocide despite overwhelming evidence of Putin’s intention to destroy the Ukrainian nation.

While the international community condemns Vladimir Putin’s invasion of Ukraine, European countries continue to fund the war by paying Russia EUR 1 billion every day for oil and gas supplies.

Image: A Ukrainian couple waiting as emergency services dig through the rubble to find the bodies of family members in Borodyanka. 9 April 2022. (Alfred Yaghobzadeh/ABACAPRESS.COM)