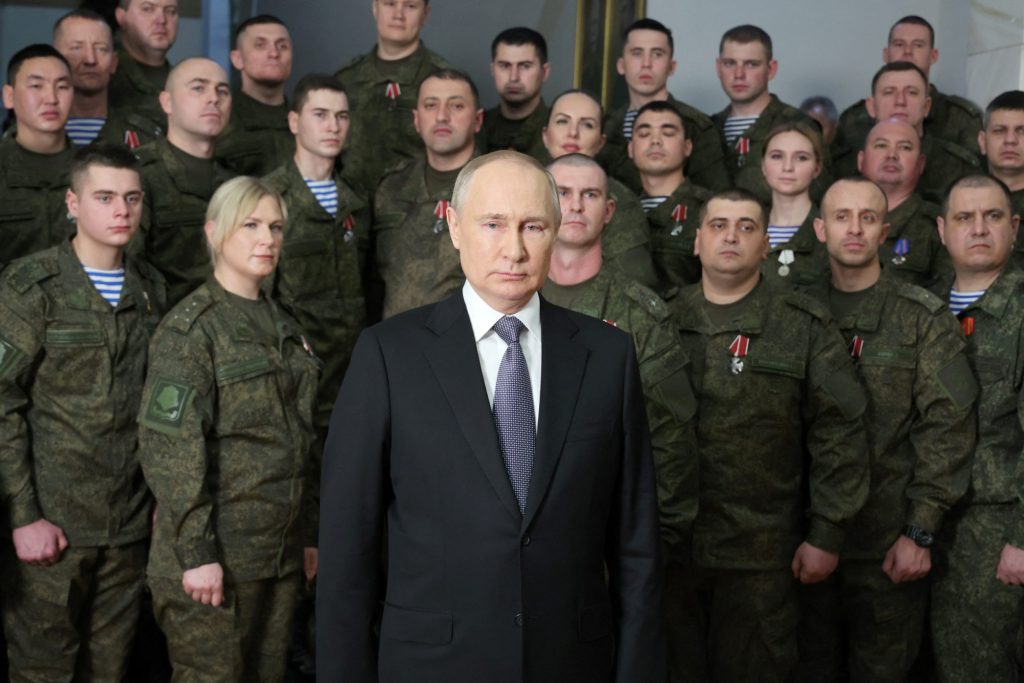 Vladimir Putin has just admitted Russia is in serious trouble. A comparison of his recent New Year address with the speech he delivered just one year earlier reveals a dramatic change in tone, focus, and language that hints at mounting alarm behind the scenes in the Kremlin over the rapidly unraveling invasion of Ukraine. Gone, too, was the Moscow skyline setting that typically serves as the backdrop for this keynote annual address. Instead, a somber-looking Putin spoke while flanked by rows of soldiers in uniform.

This symbolism matters. In modern Russia, the head of state’s New Year speech is an important tradition that seeks to set the tone for the coming year. On this occasion, the mood Putin sought to convey was of a country facing the prospect of a long and difficult war. After months spent downplaying the invasion of Ukraine as a “Special Military Operation,” he was now belatedly acknowledging the severity of the situation.

Back on December 31, 2021, Putin had been far more upbeat. “We are united in the hope that changes for the better lie ahead,” he said. “As we ring in the New Year, we hope that it will bring new opportunities for us. Of course, we hope luck will be on our side, but we understand that making our dreams reality primarily depends on us.” The final line of his address was downright soppy: “May love fill every heart and inspire us all to achieve our goals and scale the greatest heights. For the sake of our loved ones and for the sake of our only country, our great Motherland.”

Could this really have been the same Vladimir Putin who was already planning to unleash a full-scale invasion of Ukraine and plunge Europe into its largest conflict since World War II? In fact, despite the massive Russian military build-up on Ukraine’s borders in late 2021 and Moscow’s visibly worsening relations with the West, neither of these important developments was mentioned at all.

What a difference a year makes. In a nine-minute New Year speech that was reportedly the longest of his 22-year reign, Putin marked the arrival of 2023 by lashing out at the Western world and warning that the fate of Russia was at stake. “The West lied about peace,” Putin declared. “It was preparing for aggression, and now they are cynically using Ukraine and its people to weaken and split Russia. We have never allowed this, and never will allow anybody to do this to us.”

Domestic opponents were also targeted. In an apparent reference to the large numbers of military-age Russian men who chose to flee the country in the second half of 2022 rather than join the invasion, he noted that the past twelve months had “put a lot of things in their place, clearly separating courage and heroism from betrayal and cowardice.”

The speech concluded on a defiant and ominous note, with Putin indicating that Russia’s survival as an independent state was now under threat. “Together, we will overcome all difficulties and preserve our country’s greatness and independence,” he said. “We will triumph, for our families and for Russia.”

There was no frivolous talk of love, trust, and hope as in December 2021. No dreamy wishes, no hopeful expectations. This time, Putin was sounding the alarm bell. Naturally, the West was at fault and the Russian dictator himself bore absolutely no responsibility for the mess his country currently finds itself in.

Putin seems to believe, or at least wants the Russian public to believe, that Russia is tottering on the edge of a precipice with its very existence as a coherent state now in danger. In his address, he spoke several times of the need to defend and preserve Russia’s independence. This was new and noteworthy.

For many years, Putin has consistently expressed his commitment to maintaining Russia’s Great Power status and its prominent role in the international arena. He has frequently accused the West of wanting to subvert Russia. But fear of losing independence was a problem for Ukrainians, Balts, and Russia’s other neighbors. It was not something for Russians to worry about.

Can Putin be serious? Of course, he may simply be trying to terrify his domestic audience and thereby prepare the Russian public for further sacrifices in the futile and unwinnable war against Ukraine. Alternatively, he and his colleagues in the Kremlin may really sense that, their publicly expressed bravado notwithstanding, the writing is on the wall for Russia.

More than ten months since the invasion of Ukraine began, very few analysts still see a clear path to victory for Russia. On the contrary, there is broad agreement that Putin’s options are narrowing as his military fortunes decline. Russia has already been noticeably weakened by the failing invasion. Defeat in Ukraine could lead to the break-up of the Russian Federation itself, or turn the country into a vassal state of China or the West.

Putin’s speech was an unambiguous attempt to mobilize Russian society and place the whole country on a war footing. It is not yet clear whether this was successful. One thing is for sure: if the coming year turns out to be anything like 2022 for Russia, there is little chance that Putin will still be around to deliver another New Year address on December 31, 2023.

Alexander Motyl is a professor of political science at Rutgers University-Newark.

Image: Russian President Vladimir Putin makes his annual New Year address to the nation at the headquarters of the Southern Military District in Rostov-on-Don, Russia. December 31, 2022. (Sputnik/Mikhail Klimentyev/Kremlin via REUTERS)