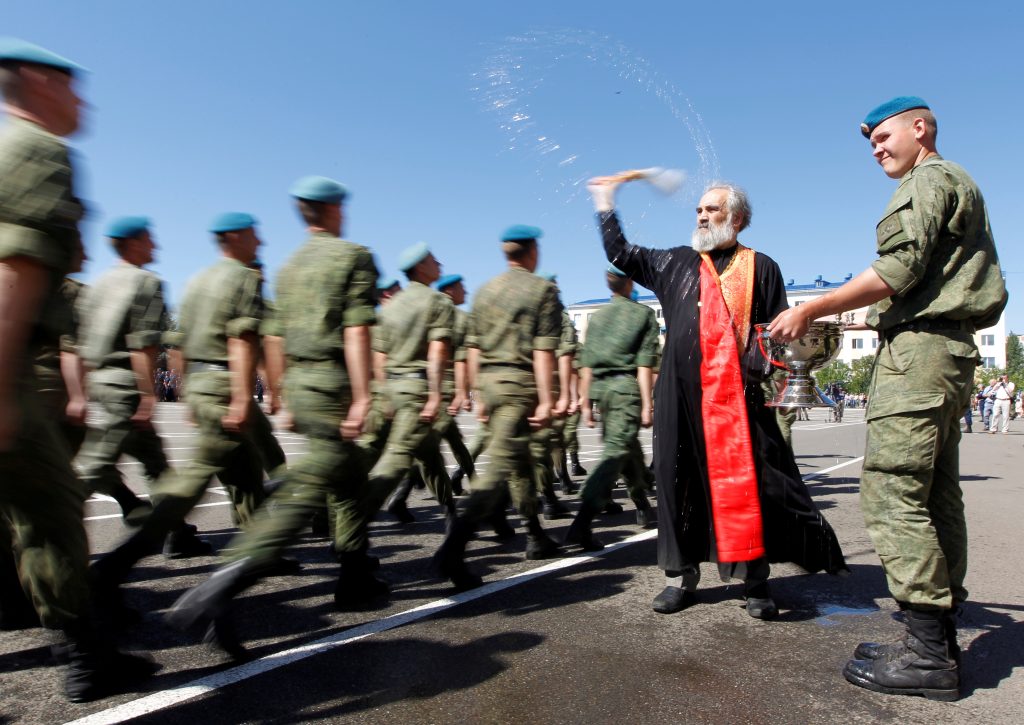 This weekend, millions of Russians and Ukrainians will mark Orthodox Easter with painted eggs and special holiday cakes blessed by local priests. These traditional Easter celebrations are among the few things the neighboring lands still have in common as the war launched by Vladimir Putin two months ago grinds on.

Religion has long been at the heart of the troubled relationship between the two countries, with the Russian Orthodox Church historically serving to strengthen Russia’s imperial authority over Ukraine. In recent years, religious ties played a central role in Putin’s efforts to prevent Ukraine from exiting the Russian sphere of influence. However, the Kremlin strongman is now discovering that a shared Orthodox faith does not mean Ukrainians necessarily embrace his vision of their country as part of a revived Russian Empire.

Both Russia and Ukraine trace their national stories back to the tenth century and the early medieval Kyiv Rus state. The adoption of Christianity by Kyiv Prince Volodymyr the Great in 988 is regarded in Kyiv and Moscow alike as the starting point of their Orthodox identities. However, there is no agreement over the modern geopolitical implications of this ancient link.

Today, the two countries remain overwhelmingly Orthodox. According to Pew Research Center data, 78% of Ukrainian adults and 71% of Russian adults identify as Orthodox believers. Nevertheless, the religious landscape is not quite as uniform as it might initially appear.

Ukraine’s Orthodox congregation is divided into a number of different dominations, with the two largest being the recently established Orthodox Church of Ukraine and the rival Ukrainian Orthodox Church-Moscow Patriarchate, which is closely tied to the Russian Orthodox Church and has traditionally been seen as subservient to the Kremlin.

Despite Russian frustration over the establishment of an independent Orthodox Church of Ukraine, Putin still seems to have genuinely believed many Ukrainian Orthodox believers would welcome his invasion. During a speech on the eve of the war, Putin spoke of the need to protect Russia’s “inalienable spiritual space” in Ukraine. This view has also been supported by the Russian Orthodox Church, which has repeatedly asserted that Ukraine is part of its spiritual territory.

Since Russian tanks crossed into Ukraine on February 24, Putin has actively sought to portray the invasion as a righteous crusade that enjoys divine blessing. The Russian leader even quoted the Bible during a massive pro-war rally held in Moscow in mid-March. “And this is where the words from the Scriptures come to my mind: There is no greater love than if someone gives his soul for his friends,” Putin declared to large crowds in the Russian capital.

So far, the war has not gone according to plan. While Russian troops have encountered stiffer than expected opposition on the battlefield and been forced to retreat from northern Ukraine, Putin’s holy war for the souls of Ukraine’s Orthodox faithful has run into similar trouble.

Many Ukrainians have been outraged by Russian Orthodox Church leader Patriarch Kirill’s open and frequently outspoken support for the war, which has included echoing Putin’s claims regarding Ukraine’s place within the so-called “Russian world.” Ukrainians have also been shocked and distressed to see the religious leader apparently bless the killing of Ukrainian soldiers.

This dismay has expressed itself in spiritual resistance that has rallied Ukraine’s fragmented Orthodox denominations. Metropolitan Onuphry, who heads the Moscow Patriarchate, has issued an unprecedented statement urging Putin to end the war. Meanwhile, more than 300 priests from his church are petitioning for Patriarch Kirill’s removal, something inconceivable just weeks ago. “It is impossible for us to remain in any form of canonical submission to the Patriarch of Moscow,” they now claim.

A number of individual Ukrainian congregations have expressed their opposition to the Russian Orthodox Church’s pro-war stance by switching their allegiance from the Moscow Patriarchate to the Orthodox Church of Ukraine.

The war has also impacted Orthodox communities beyond Ukraine. Russian Orthodox priests and deacons from around the world have publicly called on Patriarch Kirill to take a stronger peace stance. Some believers are leaving the Russian Orthodox Church altogether in protest, with numerous individual parishes defecting.

Other Christian leaders have also expressed their alarm over the role of the Russian Orthodox Church in Putin’s war of aggression. The World Council of Churches is reportedly considering expelling the Russian Orthodox Church from its fellowship. Pope Francis has been particularly vocal in his appeals for peace and has recently cancelled plans for a June meeting with Patriarch Kirill in Jerusalem.

The Archbishop of Canterbury, Justin Welby, has called on Kirill to help “end the violence in Ukraine.” His predecessor, Rowan Williams, who holds a deep appreciation for Eastern Christianity, has been significantly less diplomatic. Williams has pointedly criticized the Russian Orthodox Church and spoken of the “shocking, not to say blasphemous, absurdity of Orthodox Christians engaging in indiscriminate killing of the innocent.”

Faith matters during times of war, especially in neighboring predominantly Orthodox countries like Russia and Ukraine with a deeply intertwined religious inheritance. As the current conflict evolves, it is increasingly clear that the messages reaching Russian and Ukrainian Orthodox congregations are strikingly different. This spiritual dimension will have a crucial impact on the ultimate outcome of the war and looks set to further deepen the divide that separates modern Russia and Ukraine.

Knox Thames served in a special envoy role for religious minorities at the US Department of State during the Obama and Trump administrations. He is currently writing a book on ending twenty-first century persecution. Follow him on Twitter @KnoxThames.