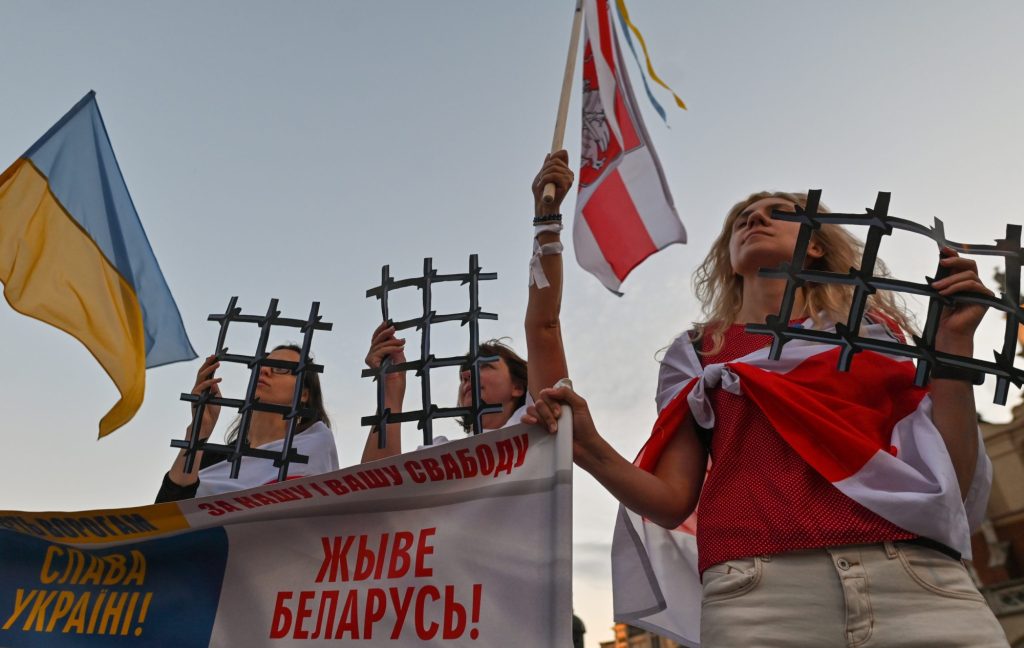 More than four hundred representatives of the Belarusian opposition gathered in Vilnius on August 8-9 for an event that highlighted a mood of increasing militancy as the movement responds to the new realities created by Russia’s ongoing invasion of neighboring Ukraine.

The conference in the Lithuanian capital was timed to mark the second anniversary of nationwide protests which rocked Belarus in the wake of the country’s August 2020 presidential election. With strong backing from Moscow, Belarus dictator Alyaksandr Lukashenka was eventually able in suppress the 2020 protest movement. However, he now finds himself heavily dependent on the Kremlin and has been forced to play a supporting role in the Russian invasion of Ukraine that few Belarusians welcome.

Lukashenka’s status as junior partner in Putin’s Ukraine war has helped to reinvigorate the Belarusian opposition while also forcing its leaders to rethink strategy. The 2020 protests succeeded in attracting mass participation but the movement proved no match for the unprecedented repressive measures unleashed by Lukashenka. Despite the violence of the regime response, opposition leaders remained committed to peaceful and lawful protests.

Decisions taken recently in Vilnius highlight how Belarusian opposition leaders are now addressing the effectiveness of peaceful protests and exploring their options in light of the war in Ukraine. A key outcome of the conference was the formation of a transition cabinet including a number of more militant figures who had previously been relegated to the fringes of Belarus’s anti-Lukashenka movement.

The new transition cabinet follows on from the creation of an anti-war movement to unite all Belarusians in support of Ukraine, which was announced by Belarusian opposition leader Sviatlana Tsikhanouskaya during the first days of the Russian invasion. This initiative sought to unite Belarusians in Belarus itself with members of the diaspora and opposition figures in exile.

Others have already gone further in their opposition to Belarusian participation in Putin’s war. The most effective domestic opponents so far have been the railway partisans, a group of Belarusian activists who sabotaged the country’s rail network to prevent the transit of Russian troops and military equipment to Ukraine. Their activities proved hugely embarrassing for Lukashenka and led to legislative changes in late May that made attacks on rail infrastructure potentially subject to the death penalty.

Belarusian volunteers are also fighting for Ukraine in a number of units including the Belarusian Regiment of Kastus Kalinouski. Many of these volunteers believe a Ukrainian victory will open the way for a free Belarus. They also recognize that if Putin achieves his goal of extinguishing Ukrainian statehood, this would condemn their own country to a new era of Russian domination.

The growth of both the railway partisan movement and Belarusian volunteer participation in Ukraine has helped spark a broader debate over the need to embrace a more direct approach to opposing the Lukashenka regime. Other more militant groups such as the Supraciu (“Resistance”) movement and the ByPol organization of former Belarusian police officers have also seen their profiles rise in recent months against the backdrop of the Ukraine war. A recent independent opinion poll by Narodny Opros found that Belarusians view ByPol and the Belarusian Regiment as being five times more relevant for the opposition movement than recognized opposition leader Tsikhanouskaya.

The recent shift within the ranks of the Belarus opposition towards a more militant stance was evident in the composition of the transition cabinet created in Vilnius, which will feature input from ByPol, Supraciu, Cyberpartisans, and the Pahonia Regiment. The cabinet member responsible for defense and security is Valery Sahashchyk, a former Belarusian army officer who is best known for a video address calling on members of the Belarusian military to change sides.

There is an understanding among members of the Belarusian opposition that the Russian invasion of Ukraine has placed their country’s fragile independence in grave danger. Lukashenka has already allowed Putin to invade Ukraine via Belarus. He has also permitted the use of his country as a platform for air raids and missile strikes against Ukrainian targets. Opponents of the Lukashenka regime now fear that Moscow may seek to officially consolidate its current informal control over Belarus.

As the Russian invasion of Ukraine approaches the six-month mark, it is clear that the war is having a profound impact on the political climate in neighboring Belarus. Members of the Belarusian opposition are rethinking their former commitment to exclusively non-violent protest and are now increasingly acknowledging the need to prepare for more active forms of resistance.

At present, this change in tone is most immediately evident in the activities of groups like the railway partisans and the volunteers who have travelled to Ukraine to fight against the Russian invasion. If the mood of militancy continues to spread to the wider opposition movement, it will likely be met with harsher domestic repression. Ultimately, the fate of the Lukashenka regime may hinge on the outcome of the war in Ukraine.

Failure to hold anyone accountable for the crimes of the Soviet era has fostered a climate of impunity in modern Russia that has paved the way for the genocidal invasion of Ukraine, writes Alexander Khara.

Guide to wartime Kyiv: City on the frontlines of European history

Visiting wartime Ukraine is certainly an extreme option but a trip to today’s Kyiv offers an opportunity to witness world history in the making while providing Ukrainians with meaningful moral and material support.

Image: Protesters hold symbolic paper prison bars representing the Belarusian population in prisons and the lack of freedom in Belarus. Members of the local Belarusian and Ukrainian diaspora supported by local Cracovians during the Solidarity with Belarus 2022 march, in the center of Krakow, on the 2nd anniversary of the presidential elections in Belarus. On Tuesday, August 9, 2022, in Krakow. (Photo by Artur Widak/NurPhoto)