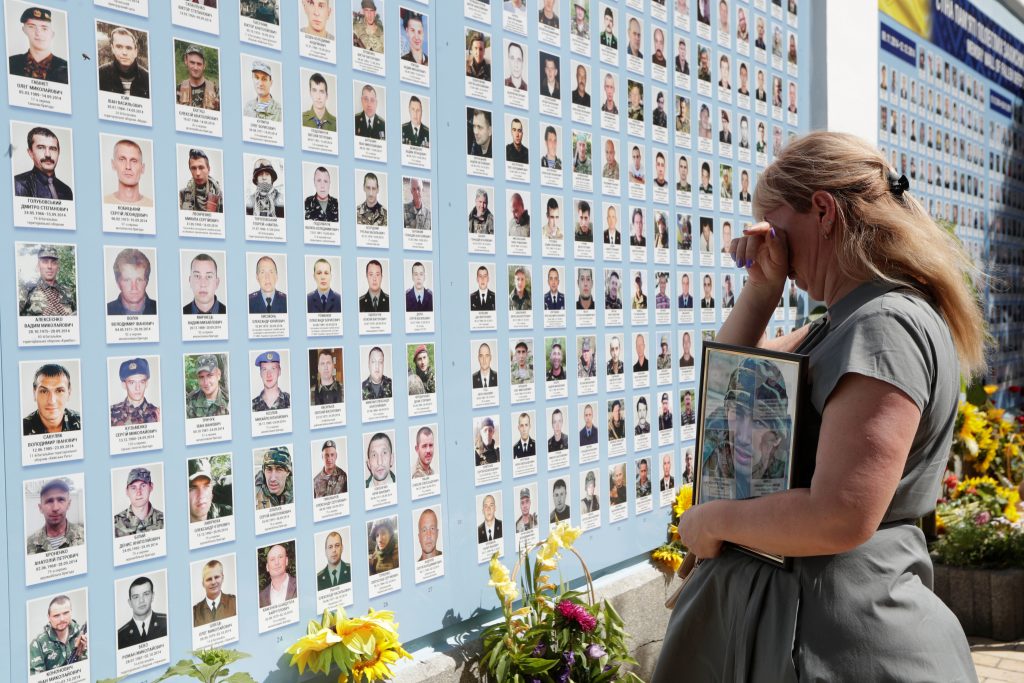 Russia’s spring 2021 saber-rattling on the Ukrainian border helped guarantee that Ukraine would be high on the international agenda during June’s G7, NATO, and US-Russia summit meetings. Fears of a major military escalation also served as a reminder that this unresolved European conflict remains at the heart of international affairs.

Ever since the onset of Russian aggression against Ukraine in early 2014, the undeclared war between the two countries has unfolded alongside an avalanche of deliberate disinformation. Most of this has come from Russian state media or the Kremlin itself, but an ideologically diverse range of Western sources have also echoed many of Moscow’s more outlandish claims.

One of the latest examples of this trend was a May 30 article by Cato Institute senior fellow Ted Galen Carpenter that appeared in The National Interest. This article is worthy of closer inspection as it repeats some of the most common myths and distortions used by the Kremlin to justify its war in Ukraine.

Carpenter employs a selection of half-truths, misinterpretations, and cherry-picked facts to paint a dark picture of rising authoritarianism and nationalism in today’s Ukraine. His talking points would be instantly recognizable to Russian TV viewers, who have encountered similar disinformation on a virtually daily basis for the past seven years.

One can only guess at Carpenter’s motives. What is clear is that he is far from alone. Since 2014, commentators on both the left and right wings of Western discourse have joined in the chorus of doubters repeating Russian claims that are designed to poison opinion against Ukraine and take the shine off the country’s narrative of democratic transformation.

To be sure, today’s Ukraine is not yet a model liberal democracy. In Freedom House’s latest global survey ranking countries according to civil and political rights, Ukraine received 60 points out of a possible 100, leaving it far behind paragons such as Norway, Finland, and Sweden.

However, within the specific historical context of the post-Soviet space, Ukraine is actually rather more democratic than one might expect. The country is clearly on a path towards greater democratization that diverges sharply from the contemporary political realities in what is an increasingly authoritarian region. Indeed, compared to Russia, which received just 20 points in the 2020 Freedom House ranking, or nearby Belarus with its 11 points, Ukraine is a relative beacon of democratic values.

Modern Ukraine has succeeded in establishing a tradition of free and fair elections, which is the cornerstone of any democratic system. While the country’s fledgling democratic institutions remain imperfect and vulnerable to manipulation, in recent decades Ukrainian elections have become increasingly transparent and highly competitive, particularly since the watershed moment of 2004’s Orange Revolution.

The current generation of Ukrainians now take it for granted that they will enjoy genuine choice at the ballot box and are confident their votes will not be canceled out by Kremlin-style election fraud. This open and competitive political culture was evident in the country’s 2019 presidential election campaign, which saw TV comic and political newcomer Volodymyr Zelenskyy win a landslide victory over the incumbent, Petro Poroshenko. The fact that an outsider could triumph so convincingly over a sitting president in a country at war illustrated the health and durability of Ukraine’s democratic culture.

Inevitably, some war-related restrictions on public discourse and political activities have been introduced by the Ukrainian government since 2014. Nevertheless, a range of pro-Russian and Euroskeptic parties continue to play an active part in Ukraine’s fledgling democracy, with officials representing these parties holding government positions in Kyiv and regions across the country.

Despite some significant shortcomings, Ukraine’s mass media landscape mirrors the country’s political pluralism and stands out in a region where centralized censorship remains the norm. With a handful of oligarchs owning most Ukrainian mainstream media outlets, editorial independence remains weak and often loses out to oligarchic interests. At the same time, Ukraine does not suffer from the kind of suffocating government control that characterizes the muzzled media environment in Russia and other post-Soviet states.

One of the most popular narratives favored by the Kremlin and critical Western commentators such as Carpenter is the idea of Ukraine as a hotbed of right-wing extremism. Such claims are rooted in Soviet-era propaganda which aimed to sully Ukraine’s national liberation movement by associating it solely with World War II Nazi collaboration.

In reality, Ukraine’s nationalist parties enjoy less support than similar political parties in a host of EU member states. Notably, in the two Ukrainian parliamentary elections held since the outbreak of hostilities with Russia in 2014, nationalist parties have failed miserably and fallen short of the five percent threshold to enter Ukrainian parliament.

Perhaps the most striking aspect of the accusations leveled at Ukraine is the refusal to acknowledge the extenuating circumstances of the country’s seven-year war against Russia. While Ukraine’s many flaws are amplified and exaggerated, there is typically little recognition that since 2014, the country has been fighting for its survival as an independent state against one of the world’s foremost military powers.

Such omissions create a politically misleading and historically illiterate impression. Vladimir Putin chose to attack Ukraine in order to prevent the country from becoming a model for a future democratic transition inside Russia itself. The Russian dictator is haunted by the Soviet collapse and sees the emergence of a democratic and truly independent Ukraine as a potential catalyst for a wave of domestic anti-authoritarianism that could spell doom for his own regime.

This explains why Putin decided to use military force against Ukraine seven years ago. It also helps make sense of his continuing readiness to incur seemingly disproportionate international costs in order to keep Ukraine from stabilizing and advancing further along the road towards Euro-Atlantic integration.

Another aspect that critical commentators such as Carpenter tend to miss is the vital self-interest that the United States and other Western nations have in Ukraine’s territorial integrity and political sovereignty. If Russian military intervention enables the Kremlin to absorb Crimea and prevent Ukraine’s Euro-Atlantic integration, this will establish a destructive security precedent for countries across the world. Humanity will have taken a giant step backwards towards an international arena where powerful nations are able to dictate to their weaker neighbors.

After the break-up of the USSR, the newly independent Ukrainian state agreed to give up the world’s third-largest nuclear arsenal due to, among other factors, pressure from Washington. In the now infamous 1994 Budapest Memorandum, the US, UK, and Russia provided Kyiv with “security assurances” as part of Ukraine’s nuclear disarmament process.

While the American and British response to Russia’s 2014 invasion of Ukraine does not technically violate the terms of this agreement, Moscow’s disavowal of the guarantees it provided 20 years earlier threatens to fatally undermine the credibility of broader efforts towards nuclear non-proliferation.

If, as Carpenter advocates in his recent article, the US were to step back from its current support for Ukraine, this would send an alarming message to the wider world. It would once more appear that weaker countries cannot rely on international law, as the West is not willing to protect their sovereignty and integrity against rapacious non-Western powers.

Russia has a number of obvious and compelling motives to pursue its relentless disinformation attacks against Ukraine. It is less clear why international commentators from across the ideological spectrum have chosen to parrot Russia’s false narratives. For some, Ukraine may represent the wrong kind of anti-imperialism.

The country’s struggle to shed centuries of Russian imperial domination, together with Kyiv’s openly stated Euro-Atlantic aspirations, have no place in worldviews defined by opposition to an allegedly America-led globalist order. Accordingly, Ukrainians are frequently denied agency and are dismissed as Western pawns, while their efforts to reclaim national identity are ripped from all historical context and slandered as extremism.

This is a dangerous game. The current crisis in Ukraine has already plunged the world into what many regard as a new Cold War. The outcome of the confrontation over Ukraine’s future now looks destined to set the tone of international relations for decades to come.

Will the West defend Ukraine’s sovereign right to embrace democracy and choose its own path? Or will we face an increasingly lawless world governed by disinformation where might is right and nuclear non-proliferation has lost all credibility? For many commentators such as Carpenter, this simple geopolitical reality seems oddly difficult to grasp.

Andreas Umland is a Research Fellow with the Stockholm Center for Eastern European Studies at the Swedish Institute of International Affairs, a Senior Expert for the Ukrainian Institute for the Future in Kyiv, and General Editor of the book series “Soviet and Post-Soviet Politics and Society” published by ibidem Press at Stuttgart.

Pro-Kremlin propaganda in Ukraine is changing. Praising Putin is a harder sell since the 2014 invasion, so now the focus is less on boosting Russia and more about making the West look just as bad.