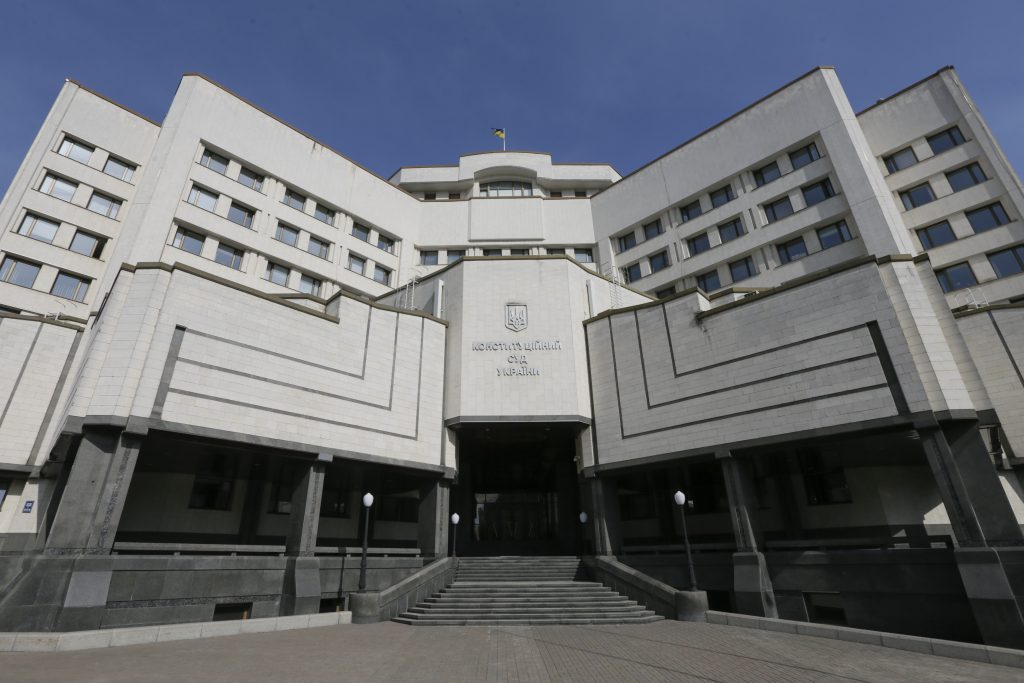 With Ukraine’s anti-corruption reforms finally beginning to produce results, the old elites have hit back. On October 27, the Constitutional Court of Ukraine declared unconstitutional the powers of the re-booted National Agency on Corruption Prevention to verify civil servants’ asset declarations. The ruling removes a vital link in the chain of anti-corruption institutions established following the 2014 Revolution of Dignity and undermines Ukraine’s ability to investigate suspected illicit enrichment by officials.

This dramatically raises the stakes in the battle currently taking place within Ukraine over the future direction of the country. It also poses the risk of grave short-term economic and political consequences. IMF and EU support for Ukraine is closely linked to anti-corruption reforms. Meanwhile, Ukraine’s economy has been battered by the coronavirus crisis and desperately needs this support.

President Zelenskyy reacted to October’s Constitutional Court ruling with a bill proposing to terminate the powers of the current composition of the court. Kyiv’s Western partners were also critical of the ruling, but stopped short of proposing a solution. For example, Council of Europe experts on the rule of law warned against terminating the judges’ mandate. Even for a good cause, they argued, violating the Ukrainian Constitution cannot lead to respect for the rule of law, which the fight against corruption pursues.

This criticism does not weigh the principle of separation of powers and institutional protection against systemic corruption. Instead, it emphasizes constitutionally guaranteed judicial independence, much as the constitutional court judges themselves do. The difference is that the former believe in the rule of law, while the latter hide behind the facade of the rule of law and judicial self-governance.

A two-thirds majority on the bench is required in order to dismiss Constitutional Court judges. As reform-minded judges are outnumbered in the court, this will never happen. Meanwhile, international experts do not provide a solution as to how the defense against systemic corruption can be effective when Ukraine’s highest court is occupied by appointees of a corrupt system.

Some of the judges that today fulminate against being pressured are also under investigation by the very same officials whose agencies they are trying to muzzle or disband. At issue are breach of mandatory disclosure of assets and other conflicts of interest.

While Ukraine’s government has decreed that the court ruling on assets will not be put into effect, the impact has been immediate. The High Anti-Corruption Court closed several cases related to asset disclosures, including against two Constitutional Court judges. Some of the country’s first graft convictions have also been overturned. The process of verifying asset declarations has ceased.

There are hopes that the Ukrainian parliament can restore the repealed anti-corruption legislation. However, significant numbers of MPs will not vote to do so, since they are either affiliated with powerful business groups opposed to far-reaching governance reforms or personally fear being investigated by anti-corruption agencies.

The 30 or so reform-minded deputies who entered Ukrainian politics in 2014 and ensured an unprecedented level of pressure for real reforms were a new phenomenon in Ukraine. The anti-corruption laws they put together were the result of reformist legislators joining forces with civil society and Western partners. Such unity is visibly missing now. A recent hearing of parliament’s Legal Policy Committee on various draft laws addressing the controversial Constitutional Court ruling postponed their consideration.

Among the 246 deputies of Zelensky’s Servant of the People party, there are genuine representatives of the people in the true sense of the term. Nevertheless, they are a minority, and there is no hope at present of being able to pass legislation to amend the Ukrainian Constitution and re-establish the Constitutional Court. This would require support from 300 MPs and recognition of the vote by the Constitutional Court itself.

All current alternative proposals to Zelenskyy’s draft bill share similar problems. They either breach the Ukrainian Constitution or require the consent of the Constitutional Court itself.

Corruption is abuse of entrusted power. Preventing and combating abuse of power is a pre-requisite for the rule of law. Only a judiciary where integrity is the rule can pursue corruption; only reliable corruption control measures and a separation of powers can ensure judges and prosecutors do not engage in corruption; and only democratic structures based on the rule of law can ensure transparency, oversight, and independent government institutions.

How can Ukraine reach the desired state of corruption control when powerful actors capture institutions in order to safeguard their dominance? As a young and fragile democracy, Ukraine is doubly vulnerable: its own oligarchs fight reforms, while Russia uses every gateway for non-legitimate influence and has a vested interest in keeping Ukraine institutionally weak.

Corruption is present in every society but a state whose power structures are based on rules and participation can ensure that entrusted power is largely not abused. When it is the exception rather than the norm, corruption can be made transparent and pursued.

The High Anti-Corruption Court is an excellent example of how Ukraine can appoint competent judges of high integrity. An independent body that included international lawyers and experts from civil society assessed the applicants. No judges in the Constitutional Court have been through a similar procedure.

The current challenge is so immense, and the reform-oriented actors so relatively weak in terms of experience and power, that they will not succeed without outside support. The EU must help President Zelenskyy find a way out of this crisis that will promote rule of law in a long-term perspective.

Ukraine stands at a crossroads. Either the harvest will be reaped in the anti-corruption battle in the years to come, or the oligarchic system with its various powerful actors will prevail.

Miriam Kosmehl is a senior expert with the Bertelsmann Stiftung’s “Europe’s Future” program and works on the importance of anti-corruption for democracy and the rule of law.

Ukraine finds itself caught between a constitutional crisis and a counter-revolution after the country’s Constitutional Court canceled key anti-corruption reforms passed following the 2014 Revolution of Dignity.

Image: Ukraine's Constitutional Court has recently been at the center of efforts to overturn the country's anti-corruption reforms. (REUTERS/Valentyn Ogirenko)