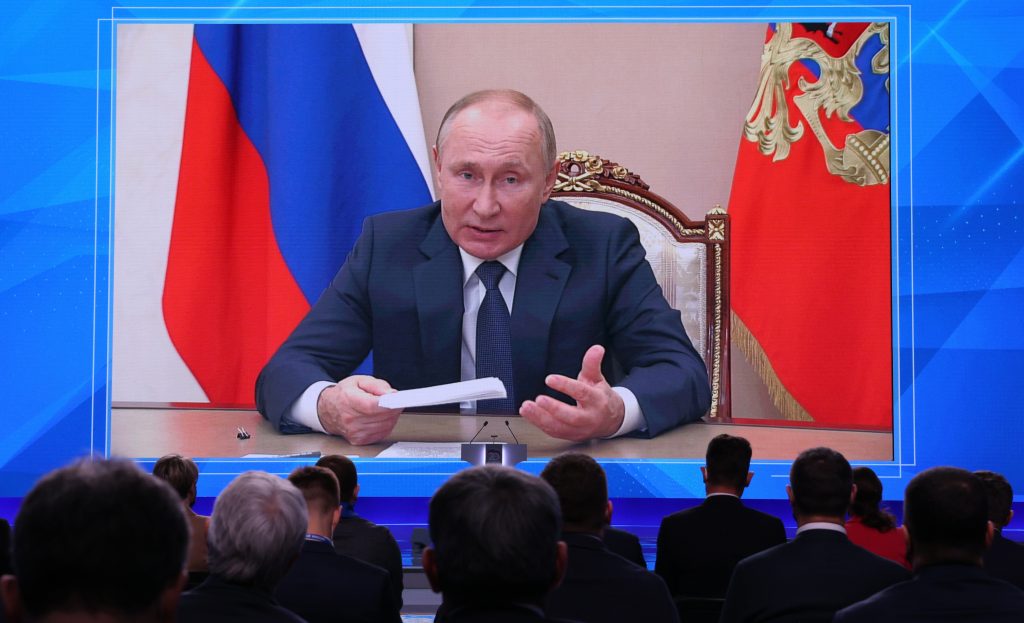 With Russian troops massed along Ukraine’s borders and Vladimir Putin threatening a potentially devastating new invasion of the country, the drumbeat of Kremlin propaganda is also becoming noticeably louder.

This is no surprise. Ever since the onset of Russian aggression against Ukraine in 2014, the information arena has been a vital front in the conflict, with the Putin regime earning itself a reputation as one of the world’s leading infowar innovators.

Over the past eight years, Moscow has been able to deploy an impressive and expanding arsenal of information weapons against Ukraine. These have ranged from small armies of online trolls to lavishly funded mainstream media outlets that combine world-class production values with an often near-complete absence of journalistic ethics.

Each individual element operates under direct or indirect Kremlin control. Together, they repeat and amplify variations of the same carefully curated messages designed to justify or otherwise support Russia’s undeclared war in Ukraine.

Putin’s formidable multi-media information ecosystem is arguably his greatest achievement. It is also perhaps his most powerful weapon.

This weapon was first honed against domestic Russian audiences. From the very beginning of Putin’s reign, he sought to reassert state control over the Russian media. Oligarch owners of Russian TV channels were forced to hand over their assets, while various high-profile journalists who refused to accept the new realities were frozen out of the industry as an example to others.

Likewise, the Kremlin troll farms that have gained such international notoriety since 2014 were initially developed as a tool to undermine and poison public discourse inside Russia itself.

By the time Putin ordered the seizure of Crimea eight years ago, his conquest of the Russian information space was virtually complete. Tellingly, during the Crimean operation and the subsequent Russian campaign in eastern Ukraine, Kremlin forces prioritized the seizure of local broadcasting facilities. This underscored the importance of information dominance in Putin’s overall plans.

Russian disinformation targeting Ukraine has remained a constant feature ever since those early days. For years, the ubiquity of anti-Ukrainian propaganda on mainstream Russian TV has been a source of online memes and black humor. Indeed, some have joked that viewers would be forgiven for thinking Russia is a small and defenseless country surrounded on all sides by Ukraine.

The Kremlin disinformation campaign has also been waged internationally, with Russia investing billions of dollars to expand its broadcast footprint globally. Despite regional variations in language and approach, the core anti-Ukrainian narratives employed from country to country have remained depressingly familiar: Ukraine is portrayed as a failed state led astray by the West and overrun by far-right extremists which rightfully belongs within the Russian sphere.

The Ukrainian authorities have undertaken numerous steps to counter the threat of Russian information warfare inside Ukraine itself. Russian TV channels and social media platforms have been blocked since the early years of the conflict. More recently, a number of Kremlin-linked Ukrainian TV channels have also been taken off the air. However, Ukraine has struggled to fight back in the international arena, where Russia’s voice remains simply too loud to be drowned out entirely by efforts to fact-check and debunk Kremlin fakes.

Russia’s information warfare tactics have been highly effective in disguising the true nature of the country’s eight-year war against Ukraine. This can be seen on a daily basis in international coverage of the current crisis, which frequently fails to emphasize Moscow’s ongoing military role in eastern Ukraine while uncritically parroting Putin’s invented claims of a growing NATO security threat to Russia.

We have now arrived at a dangerous new threshold. Putin is poised to unleash what many fear could soon become the largest and deadliest European conflict since WWII. The consequences of such a catastrophe would not be confined to Ukraine itself.

Once again, Russia’s disinformation apparatus is playing a central role in the march to war. The international community must recognize this role and react accordingly.

One key step is acknowledging that Kremlin-linked information outlets do not qualify as legitimate media in the traditional understanding and should not be treated as such. This process is ongoing and is reflected in developments including the clear labeling of Kremlin accounts on social media platforms such as Twitter. However, further steps are needed to expose increasingly cleverly camouflaged Kremlin-backed information initiatives.

It is crucial that Western officials and commentators refuse invitations to appear on shows and refrain from engaging with the Kremlin media in general. This engagement may often be undertaken entirely in good faith, but it inevitably serves to sanitize and legitimize Russian state propaganda.

Key figures within the Russian information ecosystem should also feature on the sanctions radar. Given the importance of disinformation in Putin’s hybrid war doctrine, it is striking and somewhat alarming to note that the only Russian media figure to appear on Western sanctions lists so far is Dmitry Kiselyov, the prominent TV host and head of Russia’s state-owned Rossiya Segodnya news agency.

This may be about to change. A new bill introduced on January 20 in the US Congress by Republican Jim Banks and colleagues would impose personal sanctions on a number of leading figures in Putin’s information empire. This list should be expanded further to include the many senior managers and prime time hosts whose propaganda efforts have done so much to fuel the ongoing war in Ukraine.

Efforts should also be focused on the multinational companies who continue to help finance Russia’s propaganda machine through advertising revenues. Many of the world’s most celebrated brand names rank among the top advertisers on Kremlin TV. Their familiar slogans and colorful logos have no place alongside Orwellian propaganda designed to dehumanize Ukrainians and justify a war of aggression.

The withdrawal of multinational advertising from Kremlin TV would not be entirely unprecedented. Indeed, a number of major international companies have already begun adopting a similar approach towards advertising in Belarus in response to the country’s brutal crackdown on a pro-democracy protest movement. The question now is whether these corporations are prepared to assume a similarly ethical stance in relation to the far more lucrative Russian market.

Yevhen Fedchenko is the Chief Editor at StopFake and Director of the Mohyla School of Journalism in Kyiv.

Image: A screen broadcasts an address by Russian President Vladimir Putin to United Russia party members to mark the 20th anniversary of the party founding in December 2021. (Anton Novoderezhkin/TASS via REUTERS)