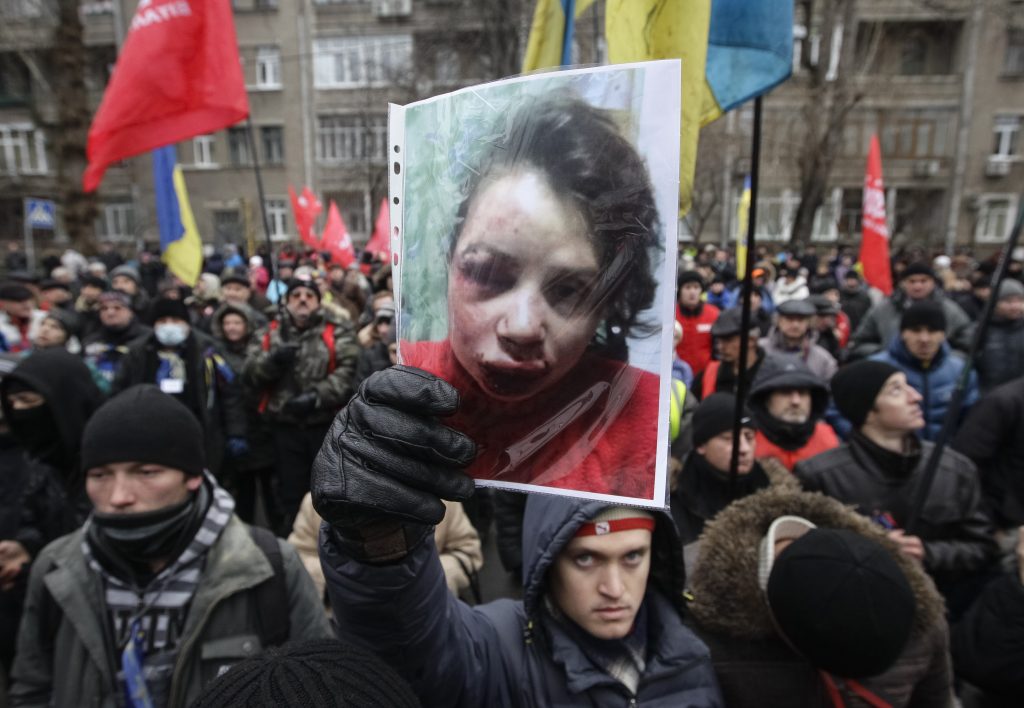 In this archive image, a Kyiv protester holds a portrait of Tetyana Chornovol after she was severely beaten by suspected government thugs during Ukraine's 2013-14 Maidan protest movement. Chornovol now faces murder charges relating to her role in the protests. Many see the prosecution as an attempt to place Ukraine's recent history on trial. (REUTERS/Stringer)

On December 15, Ukrainian state prosecutors charged former MP, journalist, and political activist Tetyana Chornovol with premeditated homicide. Chornovol was a noted leader of Ukraine’s 2013-14 Maidan protest movement. Many see the charges against her as an attempt to put the entire protest movement on trial and undermine the credibility of the country’s efforts to shake off centuries of Russian domination.

Tetyana Chornovol is a prominent figure in Ukrainian public life. In December 2013, she almost died following a beating from thugs linked to the regime of former Ukrainian President Viktor Yanukovych. She now finds herself accused of a capital crime allegedly committed months later in February 2014 against a staff member of the former Ukrainian leader’s Party of Regions.

The Chornovol case is politically explosive because it indicates the Zelenskyy administration’s intention to treat all parties involved in the 2013-14 Maidan uprising identically. This equivalence ignores the stark differences between the two opposing sides of the confrontation. On one side was a protest movement fighting for democracy, European integration, and basic human freedoms. Against them stood forces defending a corrupt regime and committing brutal acts of violence, including murder, against the civilian population.

Ukrainian Prosecutor General Irina Venediktova is on record as suggesting that all “crimes” committed during the Maidan protests, as well as during the subsequent Kremlin-inspired “Russian Spring” unrest throughout southern and eastern Ukraine, will be subject to investigation and prosecution. Chornovol’s case is only one in a number opened against civic activists. The list also includes an investigation of pro-Ukrainian activists in Odesa who engaged in street battles with pro-Russian forces at a time when the Kremlin was mobilizing fifth columns in Ukraine as part of a destabilization campaign that sought to facilitate the invasion and occupation of large parts of the country.

Incredibly, Venediktova’s approach and her procuracy’s actions are akin to Edmund Randolph, the first US Attorney General, launching criminal prosecutions of Alexander Hamilton or Paul Revere for extralegal use of force during the American Revolution, or of Samuel Adams for his persecution of loyalists.

The identity of those behind the prosecution of Chornovol is also cause for considerable alarm. The case is being spearheaded by the National Bureau of Investigation, whose deputy director was formerly a top lawyer who defended disgraced President Yanukovych against charges of treason.

Chornovol freely acknowledges that on February 18, 2014, she led a takeover of the headquarters of the then-ruling Party of Regions in Kyiv. She asserts this was an act of self-defense by protesters. The objective was to divert security service resources from other locations where protesters were under attack.

Video footage from the events of the day shows Chornovol at the center of the storming of the Regions headquarters compound. Chornovol appears to be calling for the setting of fires, but her intent is ambiguous as video evidence shows protesters burning Party of Regions literature outside the building. Moreover, video also shows workers receiving assistance from Chornovol’s colleagues in exiting the burning premises.

While there is no evidence that those filmed tossing Molotov cocktails into the headquarters were acting under the command of Chornovol, this arson ultimately led to the death of one Regions Party employee, 65-year of Volodymyr Zakharov. The victim did not exit the building along with his colleagues. Instead, he reportedly returned to his office to retrieve video evidence of the attack before dying of smoke inhalation.

Clearly, nobody should be above the law. However, the law often recognizes context. The atmosphere of extreme state violence at the time of the blaze, including the killing of Maidan protesters in the center of Kyiv, represents crucial context. There is therefore a strong case for an interpretation of civic self-defense. In such circumstances, there is ample scope for prosecutorial and investigative discretion.

In terms of the specific charges against Chornovol, it is clear that the protesters launching the assault on the headquarters did not seek to kill those inside the building and had as their main intention the diversion of security forces from other protest sites. Chornovol also asserts that the storming of the Party of Regions headquarters was an act of self-defense required to disrupt the work of an office that was believed to have coordinated and financed vigilantes who were beating and killing Maidan activists.

The Maidan protest movement, together with the subsequent volunteer movement that defended Ukraine against a Kremlin-led attempt to seize control of entire Ukrainian regions, are among the most significant events in Ukraine’s modern history. They affirmed the capacity of the Ukrainian people to defend their rights and their sovereignty. These movements are now under attack because Ukraine’s current leadership lacks a clear understanding of the nation’s values and purpose.

In his much-discussed 2020 New Year address to the nation, President Zelenskyy pleaded for national unity, irrespective of whether someone is a nationalist or pro-Russian, a liberal or a “Red.” This argument is superficially attractive, but in reality, a modern, democratic, and sovereign Ukraine cannot hope to survive by embracing such polar opposites. Instead, Ukraine needs vision, direction, and a common purpose rooted in its European choice and its Ukrainian identity. This is precisely what emerged on Maidan during the dramatic events of winter 2013-14.

For this reason, the charges against Chornovol are far more than a solitary case brought against an individual protest leader. This prosecution threatens Ukraine’s future by establishing a sense of moral equivalence between those fighting in defense of their country’s fragile democracy and independence, and the forces that support authoritarian violence, corruption, and domination by Russia. In other words, it risks putting Ukraine itself on trial.

Adrian Karatnycky is Senior Fellow at the Atlantic Council.