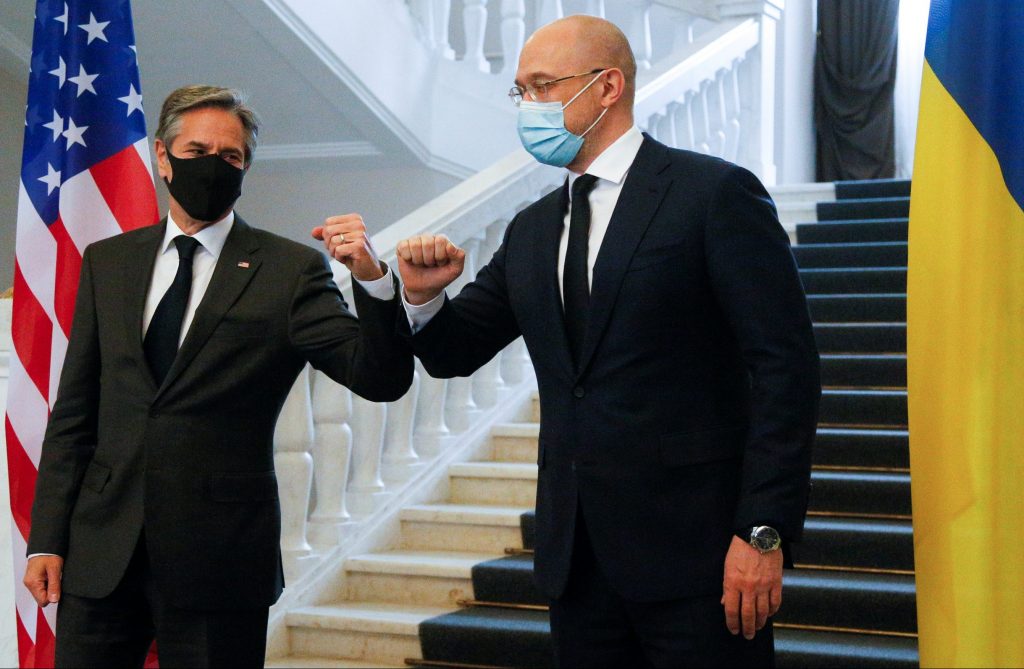 Ukrainian President Volodymyr Zelenskyy’s recent press conference marking his second year in office reinforced the impression that Kyiv is still struggling to correctly interpret the diplomatic signals it is receiving from Washington. It is unclear whether this problem lies in an unwillingness to conduct reforms or the Zelenskyy administration’s inability to navigate the world of international diplomacy. However, it is clearly in the interests of Ukraine to build more effective dialog with the country’s international partners.

Finding a common language is essential for effective communication, and this is nowhere truer than in international relations. With this in mind, US Secretary of State Antony Blinken’s early May visit to Kyiv was a good example of the challenges that can arise when key messages become lost in translation.

Preparations for the visit were far from ideal. On the eve of the US delegation’s May 5 arrival, Ukrainian officials took steps on the domestic front that went directly against America’s core expectations for Ukraine’s reform agenda, exploiting loopholes in order to dismiss Naftogaz CEO Andriy Kobolyev from his post. The state-owned energy giant’s supervisory board, which should theoretically have been responsible for any such changes in the senior management of Naftogaz, was temporarily dismissed in order to legitimize this act of direct government intervention.

At first glance, personnel changes at Naftogaz may appear relatively inconsequential within the wider geopolitical context of US support for Ukraine. Indeed, Blinken’s visit was a direct response to Vladimir Putin’s saber-rattling military buildup of over 100,000 Russian troops on the Ukrainian border and in Russian-occupied Crimea.

However, this overlooks the importance Ukraine’s international partners attach to the fight against corruption. Since the outbreak of hostilities with Russia in 2014, Ukraine’s transformation into a rule-of-law democracy has been a central pillar of the Western response to Kremlin aggression. An important component of this transformation is the reform of corporate governance at Ukraine’s many large state-owned enterprises, which have long served as hubs for institutional corruption and political interference. Last month’s sudden change at the top of Naftogaz was therefore a very serious matter for the US, as it strikes at the heart of Ukraine’s broader reform agenda.

Blinken’s team is not short on Ukraine expertise. He arrived in Kyiv along with Victoria Nuland, the Under Secretary of State for Political Affairs. Nuland is well-known in Ukraine thanks to her former role as Assistant Secretary of State for European and Eurasian Affairs during the Obama presidency. In this previous role, she had been deeply involved in establishing the American approach towards Ukraine’s post-2014 reform agenda.

One of the issues Nuland dealt with during the Obama years was Ukraine’s corporate governance reforms. It is hardly surprising, therefore, that she and her colleagues regarded the news from Naftogaz as extremely unwelcome ahead of their high-profile visit. Once in the Ukrainian capital, Blinken called the developments at Naftogaz “a bad signal and a potential risk to the image of Ukraine.”

Blinken was actually echoing earlier comments from Biden administration officials. Speaking in Washington on April 29, State Department spokesperson Ned Price expressed US concerns over the Ukrainian government’s use of procedural loopholes to oust well-regarded experts from the boards of several key state-owned enterprises. Price’s comments offered an indication of US dissatisfaction at Ukraine’s political backsliding on corporate governance reforms.

The Naftogaz situation forced Blinken into some delicate diplomatic maneuvers. Canceling his planned Kyiv trip was not an option as it would have been interpreted by the Kremlin as signaling a decrease in US support for Ukraine. However, proceeding with the visit as if nothing had happened would indicate American tolerance for Ukraine’s retreat from the reform agenda.

His solution was to travel as planned while adjusting his messaging in order to reflect US displeasure. This included firm rhetoric identifying domestic corruption alongside Russian aggression as the two key dangers facing today’s Ukraine. Blinken also stressed the need to reduce oligarch influence and continue along the road to reform.

At every step of the way during his time in Kyiv, Blinken underlined the twin threats of Russia and corruption, making clear that the US views these challenges as inseparable. However, it is far from clear whether the Ukrainian authorities got the message.

Instead, it would appear that the Zelenskyy camp regarded the visit as a success simply because it had taken place. For those close to the Ukrainian leader, it seems that the details of Blinken’s message were of secondary importance.

This became apparent almost immediately after Blinken’s departure. The following day, the Ukrainian government declared its dissatisfaction with the supervisory board at Ukrhydroenergo, Ukraine’s largest state-owned hydroelectric energy provider. This could result in the dismissal of the board and the company’s CEO. The government’s stance appeared particularly hard to justify given the positive financial results posted by Ukrhydroenergo in 2020, when the company reported a profit of around USD 140 million.

Meanwhile, the Ukrainian authorities also moved to officially confirm the controversial recent changes at Naftogaz. On May 13, the Office of the President announced that a one-year contract had been signed with new Naftogaz CEO Yuriy Vitrenko. On May 20, during his annual press conference, Zelenskyy justified the move by claiming that Naftogaz had been working in its own interests opposed to the interests of the state.

Ukraine’s actions following the Blinken visit create the impression that President Zelenskyy is looking to test the country’s Western partners and see how far he can go. This is a tactic that has long been attacked by domestic and international critics of Ukraine’s unconvincing reform efforts, who accuse successive Ukrainian administrations of imitating reforms while engaging in regular retreats.

The US is not the only Western partner to raise the alarm over Ukraine’s corporate governance problems. On May 11, 2021, the Organization for Economic Co-operation and Development published a review of corporate governance at Ukraine’s state-owned enterprises which described reforms as “nascent and fragile, often left unfinished, and in some cases, even reversed.”

This is not an administrative detail. The future of Ukraine as a prosperous and resilient European state depends on the country undertaking fundamental reforms, including corporate governance in the public sector. At the same time, Ukraine has no chance of withstanding ongoing Russian aggression without continued Western support. In order to safeguard this support, Ukraine must demonstrate progress on the domestic front in the fight against corruption and oligarch influence.

Recent events indicate that the Zelenskyy administration might not have fully digested this reality. The language used by Ukraine’s partners may simply have been too diplomatic. In order to make their position clear, it may be time to consider more direct and unambiguous forms of communication.

Oleksiy Honcharuk is the former Prime Minister of Ukraine (2019-20).

As Vladimir Putin’s hybrid war against Ukraine grinds into its eighth year, Russian passports are emerging as Moscow’s most effective weapon in its struggle to limit Ukrainian sovereignty.

Image: US Secretary of State Antony Blinken and Ukrainian Prime Minister Denis Shmyhal in Kyiv on May 6. (Efrem Lukatsky/Pool via REUTERS)