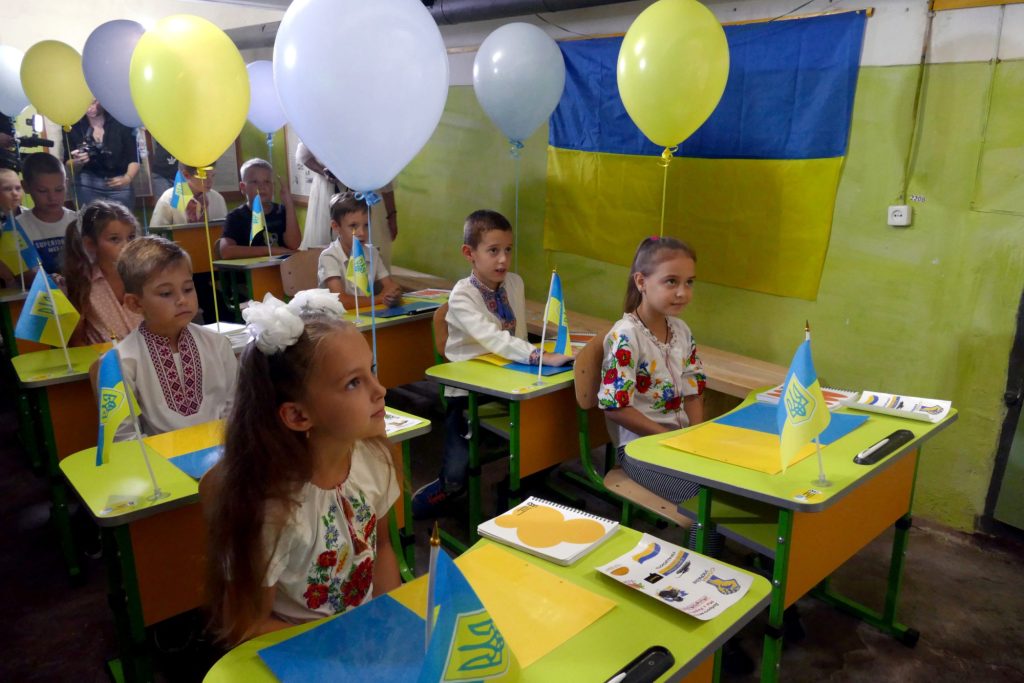 Ukraine began a new academic year on September 1 with the country still engaged in a fight for survival against Russia’s ongoing invasion. For millions of Ukrainian schoolchildren, this meant a return to the classroom with the prospect of lessons being regularly interrupted by air raid sirens. Schools without adequate air raid shelters were unable to open at all.

For those living in Russian-occupied regions of Ukraine, the situation is far worse. Schools under Russian control are being forced to adopt a Kremlin-curated curriculum designed to demonize Ukraine while convincing kids to welcome the takeover of their country and embrace a Russian national identity. Teachers and parents who dare to object face potentially dire consequences.

Ever since Russia’s full-scale invasion began on February 24, Ukrainian children have been among the primary victims of what is Europe’s largest armed conflict since World War II. Hundreds have been killed, while millions have been displaced by the fighting and forced to flee to unfamiliar surroundings elsewhere in Ukraine or outside the country. Thousands of Ukrainian children are also thought to have been subjected to forced deportation to the Russian Federation.

The Kremlin is now targeting young Ukrainians as part of its campaign to eradicate Ukrainian national identity in areas under Russian control. In an address to mark the start of the new school term on September 1, Russian President Vladimir Putin underlined the importance of indoctrinating Ukrainian schoolchildren.

Putin dedicated part of his speech to Ukraine, lamenting that Ukrainian children aren’t taught that Russia and Ukraine were once both part of the Soviet Union or that Ukraine has no history as an independent state. He also declared that the Donbas region of eastern Ukraine was historically Russian territory that had been wrongly included within Ukraine’s borders by the Bolsheviks. Putin blamed the education system in Ukraine for distorting historical facts and contributing to the creation of anti-Russian sentiment in Ukraine that posed a threat to Russia.

This emphasis on the reeducation of young Ukrainians should come as no surprise. Throughout Putin’s 22-year reign, the Russian school system has grown increasingly politicized as the Kremlin has sought to bring aspects of the national curriculum into line with officially endorsed narratives. Textbooks and teaching materials have been developed to reflect the state’s approved view of Russian history in particular, with children subjected to highly sanitized versions of the Soviet past.

In occupied regions of Ukraine, Russia has embarked on a comprehensive reeducation program that includes specific efforts to challenge the entire notion of a separate and distinct Ukrainian nation. This began during the initial period of occupation with the removal of Ukrainian textbooks and all symbols of Ukrainian statehood from schools. In some cases, Ukrainian history books were demonstratively burned.

The occupation authorities have attempted to pressure Ukrainian teachers into adopting the Russian curriculum. Despite the obvious risks involved, many have refused to cooperate. Russia has sought to overcome objections via both threats and incentives. Those who agree to adopt the new Kremlin-approved teaching guidelines are offered cash payments, while anyone who objects faces dismissal along with possible imprisonment or worse.

Confronted with a shortage of Ukrainian teachers willing to cooperate with Moscow’s russification agenda, the occupation authorities are seeking to import staff from Russia itself. Hundreds of Russian teachers are believed to have agreed to relocate to Ukraine and teach in the occupied regions. Unsurprisingly, the subjects most in demand are Russian history, literature, and language. This influx of Russian teachers has been accompanied by the distribution of new textbooks aligned with Kremlin thinking.

Volunteering to indoctrinate children in occupied Ukraine may not be entirely risk-free for educators who choose to do so. A number of Russian teachers were reportedly detained during Ukraine’s recent successful counteroffensive in the Kharkiv region after having been abandoned by the fleeing Russian military. While details have yet to be confirmed, they may now face criminal charges.

The risks are far higher for Ukrainian parents who refuse to enroll their children in schools offering the Russian curriculum. The occupation authorities have warned parents who protest that they face fines and possible imprisonment. In some cases, Kremlin appointees have threatened to remove parental rights and separate children from their families. With forced deportations and the illegal adoption of Ukrainian children already well-known features of the occupation, these cannot be treated as idle threats.

Russia’s campaign to completely russify the Ukrainian education system is part of a broader drive to extinguish Ukrainian statehood and eradicate Ukrainian national identity in areas under Russia’s control. The apparently voluntary participation of Russian schoolteachers in these efforts raises troubling questions about the role of non-military personnel in possible war crimes. With hundreds of thousands of Ukrainian children currently vulnerable to Kremlin indoctrination, their fate is a powerful argument for the urgent liberation of Russian-occupied Ukraine.

Image: Ukrainian children displaced by the war sit at desks in a bomb shelter in Odesa. (Yulii Zozulia via Reuters Connect)