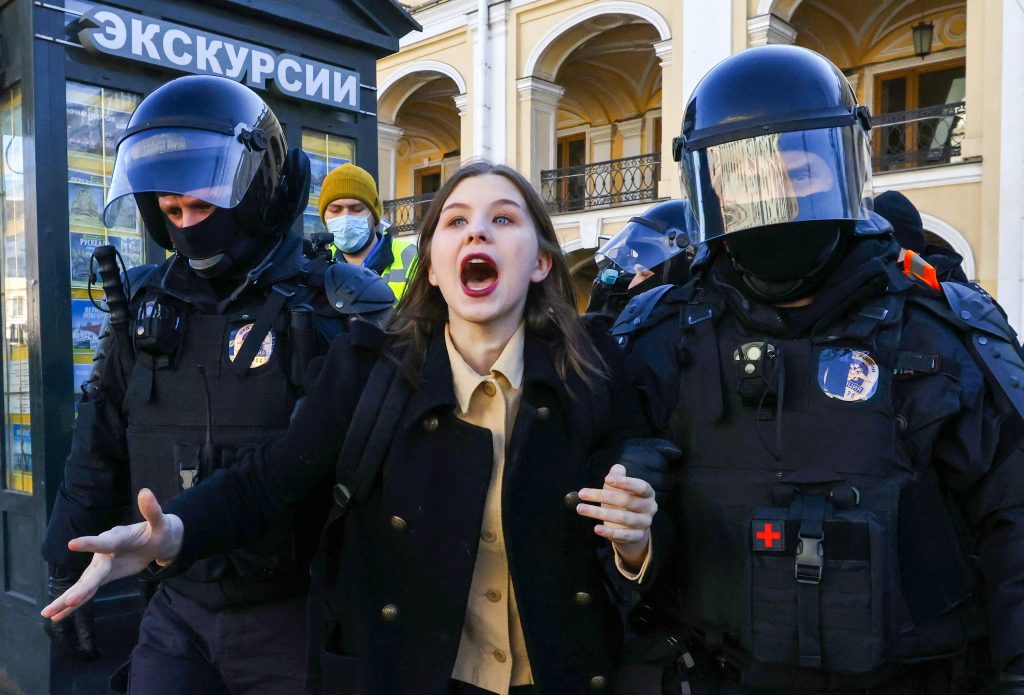 On March 14, a Russian state TV journalist named Maria Ovsyannikova burst onto the set of a live news broadcast on Russia’s main state-run TV channel holding a sign with anti-war messages in English and Russian. Within hours, she was facing a criminal investigation under a new Russian law against “discrediting” the country’s armed forces adopted just ten days before Ovsyannikova’s protest, charges carrying penalties of up to 15 years’ imprisonment.

In the three weeks since Russia launched its full-scale invasion of Ukraine, many Russians have sought to voice their opposition to their country’s brutal and destructive war. According to the human rights group OVD-Info, almost 15,000 Russians in over 150 cities have been detained for anti-war protests, including over 5,000 on March 6. Given the potential consequences, these acts clearly demonstrate bravery and conviction. Less clear, however, is the scale of overall Russian public opposition to the war.

The question of anti-war sentiment in Russia is an important one. Some pundits and policymakers see opposition from the Russian public as one potential way out of the tragic present circumstances. Others, pointing to poll numbers and public demonstrations of militarism, see the Russian public as broadly supportive of the war and even complicit. Both the optimism of the former outlook and the pessimism of the latter are misplaced. While there is some evidence that the war against Ukraine is unpopular among the Russian public, the political realities of Putin’s Russia mean that this sentiment will not be reflected in opinion polls.

Nationwide polling carried out a week after Russia’s full-scale invasion began found that 58 percent of Russians supported the war while 23 percent opposed it. As with any public opinion research conducted in authoritarian countries, those numbers must be considered in context. In contemporary Russia, where dissent is fully criminalized, it is inevitable that some significant portion of respondents will feel afraid to share views opposing the Putin government and its policies.

Another caveat for viewing these results is Russia’s media environment, which is dominated by state-controlled news outlets pushing coordinated propaganda lines to create a false picture of a “military special operation” while concealing the war’s true aims and costs. If the mainstream media in Russia could honestly cover Russian military atrocities in cities like Kharkiv, Kyiv, and Mariupol, support for Putin’s policy in Ukraine may drop sharply.

One way to understand this potential reaction is to consider the lengths to which the Putin regime has gone to prevent the public from learning the reality of the war. One of the government’s first steps following the invasion was the rapid passage of a new law on “discrediting the armed forces” which has had the effect of heavily pressuring media into self-censorship by threatening long prison terms against anyone reporting accurately on the war.

The Russian government has also blocked several of the few remaining Russian independent news outlets, as well as major international social media platforms including Twitter and Facebook. The year running up to the war saw a sharp escalation in the Putin regime’s longstanding campaign against Russia’s independent media, with dozens of outlets added to the country’s “foreign agents” list and aggressive new extortion tactics deployed to pressure international social media platforms into aiding censorship efforts.

Despite these extreme measures aimed at cutting Russians off from the reality of what their government is doing in their name, it is apparent from the public protests that a small but significant number of Russians are learning the truth and that it is shocking their consciences.  Thousands of Russians are proving themselves willing to take personal risks to make their voices heard; those escaping criminal liability still face the potential loss of employment and education opportunities. In a country of over 140 million, this represents a small fraction of the population. However, there are surely many more who oppose the war but don’t want to risk expulsion from university or police violence to make demands on a government that places zero value on the consent of the governed.

While conditions in Russia make it impossible to assess precise levels of support for the war, it is important to reject ideas of collective blame and to recognize that Russian public opinion is not a monolith of pro-war sentiment, nor is the Russian public complicit in government policies over which it has no say. The unprecedented sanctions imposed on Russia will bring poverty and suffering for millions of ordinary Russians whose government refuses to tell them the truth about the policies it pursues without their consent. To acknowledge that these Russians are also victims of this war neither excuses the Putin regime of its responsibility for the decisions that brought these sanctions about nor diminishes the far greater suffering of the Ukrainians facing mass death and dislocation at the hands of a Russian military committing widespread war crimes.

The war and the resulting sanctions represent the most significant disruption to Russian society since the collapse of the Soviet Union. At this early stage, we cannot predict future developments with any confidence. But what is clear is that any hope for a more peaceful Russia will require the empowerment of those Russians who reject the repression and militarism of the current government.

Observers seeking cause for optimism should note that public opinion research shows support for the war concentrated among older Russians, while respondents in the 18-24 age group were actually more likely to express opposition than support (39 percent opposed versus 29 percent supporting). Rather than alienating this cohort by treating them as responsible for a conflict they oppose, Western policymakers and commentators should reject the Kremlin narrative of a public united in support of Putin’s invasion and instead express solidarity with Russians who oppose this disastrous war.

Dylan Myles-Primakoff is Senior Program Manager for Eurasia at the National Endowment for Democracy and a nonresident senior fellow at the Atlantic Council.

As the West imposes crushing sanctions on Russia over Vladimir Putin’s full-scale invasion of Ukraine, governments must also address the complex issue of academic cooperation with Russian universities.