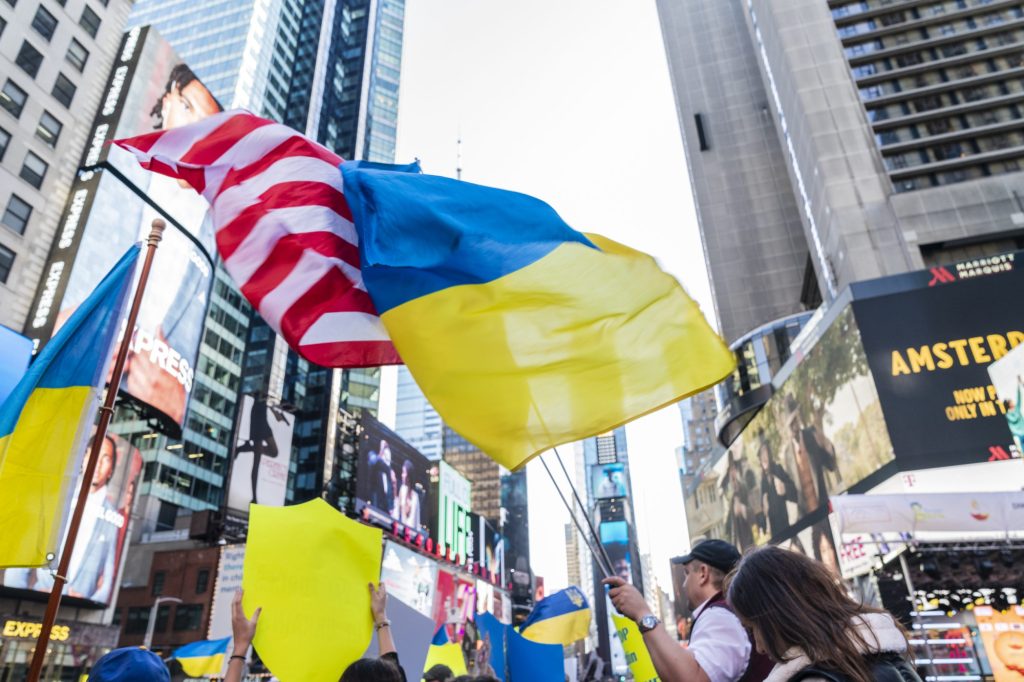 With Vladimir Putin’s invasion of Ukraine currently in its ninth month, the ongoing war is high on the agenda as Americans prepare to vote in next week’s midterm elections. The US has led international efforts to bolster the Ukrainian fight back against Kremlin aggression and has provided Ukraine with crucial military, economic, and diplomatic support, but recent statements from both sides of the political divide indicate that this support cannot be taken for granted.

The most widely reported comments came from senior Republican and House Minority Leader Kevin McCarthy, who indicated in early October that a future Republican-controlled Congress would not be prepared to offer Ukraine any more “blank checks.” Meanwhile, a letter sent to President Biden by a group of 30 progressive Democrat lawmakers calling for a Ukraine ceasefire push was hastily withdrawn in late October following a strong backlash.

While the political debate continues, survey data indicates strong US public backing for policies in support of Ukraine. A Reuters/Ipsos poll conducted in early October found that 73% of Americans believed the United States should maintain support for Ukraine. Meanwhile, 66% of respondents said Washington specifically should continue providing weapons to Ukraine, up from 51% in a similar poll two months earlier. The latest University of Maryland poll reached similar conclusions.

With the outcome of Russia’s Ukraine war still very much in the balance, the coming US vote has the potential to shape the geopolitical landscape for the coming years. The Atlantic Council invited a range of experts to share their views on what the midterm elections might mean for Ukraine.

Daniel Fried, Distinguished Fellow, Atlantic Council: If the Republicans take Congress (or even one House), the domestic political dynamic in Washington will shift toward confrontation with Republicans spending time on investigators, allegations, and accusations.

In foreign affairs, the Republicans will be split between neo-Reaganist and Trumpist wings. Both will attack the Biden Administration and push it to be tougher on China and Iran. Both wings will also push for greater burden sharing (meaning defense spending) by US allies. The neo-Reaganites will urge more push back against Putin while the Trumpists will either argue for pulling back from support for Ukraine or, in extreme cases, argue that accommodation with Russia is in the US national interest. Their stance will resemble the “isolationist” position of indifference to Hitler’s rise in the late 1930s.

The Democrats and neo-Reaganite Republicans will generally support Ukraine. Democrats may split, with a few hard left Democrats taking positions similar to Republicans who want to distance the US from Ukraine. But they will be few in number. Republicans who oppose continued aid to Ukraine will be larger in number. But Congress is unlikely to follow their lead.

Calls for negotiations on Putin’s terms, meaning that the US should push Ukraine to surrender its people and land to Russia, will grow but are unlikely to prevail as long as Putin keeps demanding the fruits of victory over Ukraine that he has not and may never attain. In short, US support for Ukraine will continue as Russian atrocities continue and as Ukrainians continue to resist effectively.

Suriya Evans-Pritchard Jayanti, Nonresident Senior Fellow, Atlantic Council: Ukrainian President Volodymyr Zelenskyy learned the hard way in 2019 how much domestic US politics can affect Ukraine’s reality. He and his team would be right to worry about next week’s polls. Whether or not the GOP will follow through on its threats to scale back Ukraine aid is impossible to predict, but it is definitely a real possibility.

This was Putin’s plan all along. He has aimed to cause an energy crisis that would drive up inflation and thereby trigger popular dissatisfaction that would result in the fall of governments and leaders opposed to him and his war in Ukraine. If the Republicans take the House and proceed to cut or reduce US support for Ukraine, they will be acting in Putin’s interests. Let us hope that threats to do so are campaign posturing and nothing more.

It is possible to argue that US President Joe Biden and his advisors have fallen short in their handling of the Russian invasion of Ukraine. Nevertheless, helping Putin in his self-proclaimed genocidal conquest of an emerging European democracy is absolutely the wrong way to voice legitimate criticisms of US foreign policy. Whatever the outcome of the midterm elections, the US must not enable Putin.

Kristina Hook, Assistant Professor, Kennesaw State University: American public opinion on Ukraine is remarkably bipartisan and durable, with 73% of Americans agreeing in a recent Reuters/Ipsos poll that the US should continue to support Ukraine despite Russia’s nuclear saber-rattling. Two-thirds of Americans say they are closely following the war, which is particularly notable as coverage has declined and reporting has transitioned away from gripping human interest stories to focus on important military dynamics.

These numbers imply that consensus surrounding Ukraine has held throughout the routine politicization of an election cycle. Regardless of the midterm results, I therefore expect the majority of US politicians across the aisle to reflect the public sentiment of their voters, who correctly understand the moral stakes of Russia’s brutal violence against Ukrainians.

As the politicking of the US election cycle declines after the midterms, I expect an increase in bipartisan articulations of the strategic importance of a clear Russian defeat for the preservation of the rules-based global order that underpins US political stability and economic success. Ukraine’s struggle for independence from a ruthless adversary resonates with American voters, yet a key post-midterm question remains if and how new and returning Congressional leaders will convey the national security impetus for Ukraine’s victory.

Doug Klain, Nonresident Fellow, Atlantic Council: Support for Ukraine is one of the few issues that has managed to remain largely bipartisan in the United States. Regardless of the midterm elections, the American public is still overwhelmingly in favor of continued aid to Ukraine. It’s also likely that the majority of Congress will remain in favor of further aid to Ukraine, no matter the outcome on November 8.

That’s the good news. However, within both parties there are prominent voices calling for a shift in policy that would embolden Russia and put Ukraine in a worse position at the negotiating table, when that day eventually arrives. This is the reason why the Biden Administration is reportedly mulling a legislative blitz during the lame-duck session to lock in another critical package of Ukraine aid. We’ve seen in the past how vocal minorities in Congress have been able to gum up the works and stop major legislation from sailing smoothly to the President’s desk. Continued aid for Ukraine may become a target if these factions grow their numbers in Congress.

While the consensus in Washington is likely to remain in favor of steadfast support for Ukraine, a more vocal opposition to aid means that Ukraine’s friends need to step up efforts to communicate with the American public about why this aid is in the interests of the US. This means making clear that Ukraine’s success is also a win for the United States.