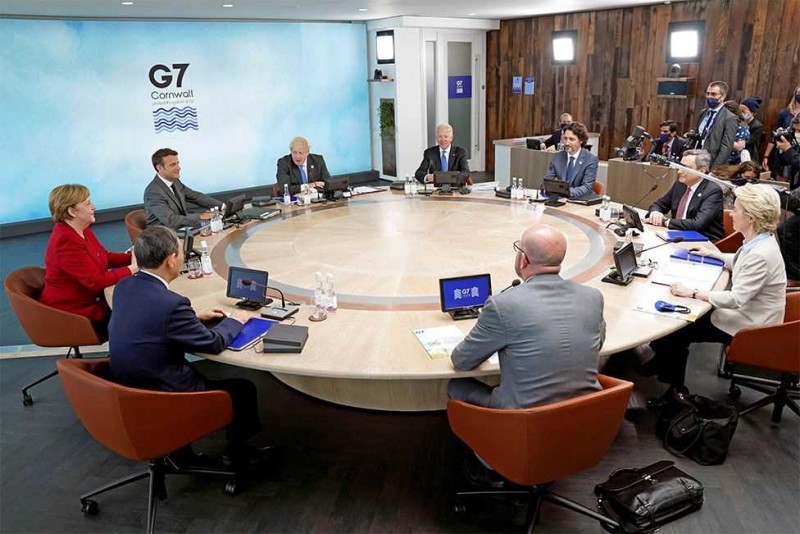 Biden Rallies the G7. On his first overseas trip as president, Joe Biden joined the leaders of the G7 group of democracies in Britain for a summit, resulting in commitments to provide one billion COVID-19 vaccines to developing nations, as well as agreements on a global minimum tax and a major new initiative to finance infrastructure projects in the developing world to counter the influence of China. Biden later traveled to Brussels for his first summit with NATO leaders, and separately, with EU leaders, securing joint statements of concern over China and Russia and pledging to work together to advance a rules-based international order.

A New Atlantic Charter. While in London, Biden joined British Prime Minister Boris Johnson in signing a New Atlantic Charter that sets forth a statement of shared values and common aspirations. Like the original Atlantic Charter signed by Britain and the US in 1941, the new document lays out eight fundamental principles for a stable and secure global order, including the need to address new challenges such as emerging technologies, cyber threats, and climate change.  The document was criticized by Russian foreign minister Sergey Lavrov as “ideologically tainted” and by China’s Global Times as “misreading the trend of time.”

Biden-Putin Meeting.  Biden ended his visit to Europe by meeting with Russian president Vladimir Putin in Geneva. During the nearly three hours of talks, Biden reportedly raised concerns over Russian cyberattacks; human rights violations, including the imprisonment of opposition leader Alexey Navalny; and aggression against Ukraine. The two leaders agreed to launch a strategic stability dialogue to deal with issues such as arms control and cyberattacks, and to send ambassadors back to each other’s capitals.

“America is better positioned to advance our national security and our economic prosperity when we bring together like-minded nations to stand with us… Our alliances weren’t built by coercion or maintained by threats.  They’re grounded on democratic ideals and a shared vision of the future … where the rights of all people are protected… where nations are free from coercion or dominance by more powerful states; [and] where the global commons … remain open and accessible for the benefit of all.”