Photo Credit: @MalmstromEU
EC Trade Commissioner Cecilia Malmström and US Trade Representative Michael Froman held a meeting in Washington, DC this last week with lead negotiators Dan Mullaney and Ignacio Garcia Bercero, Michael Punk, Ambassador David O’Sullivan and others to gauge the current status of negotiations and the way ahead.

Do you like staying up-to-date on transatlantic trade issues? Want to have TTIP&TRADEinAction emailed to you weekly? 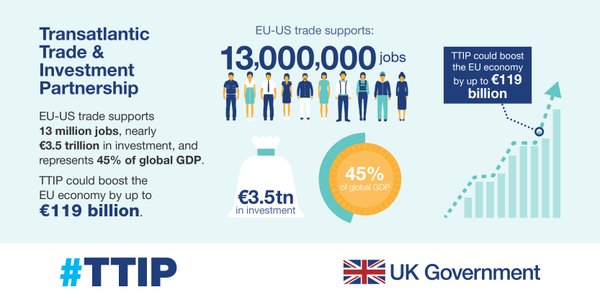 “On both sides people are questioning both the fundamental benefits of open trade and as the fairness and effectiveness of the means to achieve it. So how do we resolve this paradox?” Through engagement, by taking people’s concerns into consideration, and through transatlantic cooperation. – Cecilia Malmström

Last week, European Trade Commissioner Cecilia Malmström visited Washington to discuss TTIP with a wide variety of stakeholders. She gave a speech on the EU’s trade priorities in 2016 at the Peterson Institute of International Economics, stressing the importance of deep cooperation between the European Union and the United States on trade issues.  (European Commission)

TTIP and Global Trade: What’s in it for Sweden, Europe, and the World

“TTIP negotiations only make sense in this broader context. The aim is an EU economy that is open for business with the world, not just with the US. But TTIP does have a special economic importance. That’s because of the scale of the transatlantic economic relationship. And an ambitious TTIP can spur more trade, supporting many more jobs.” – Cecilia Malmström

Commissioner Malmström participated in a two-day conference at Gothenburg University on March 14-15. In her speech, she spoke about the the trade agreements that the European Commission is currently negotiating and the benefits of TTIP and other trade deals for Sweden, Europe and the world at large. She stressed that the European Union’s trade policy is focused on creating economic opportunities while projecting and protecting European values. (European Commission)

Washington’s Ambassador to the European Union “We are Making Progress”

“Europe as a whole needs this agreement as a stimulus package that won’t add new debt. But I understand the concerns – not just about the United States, but also about this idea that the elites, Brussels, the government apparatus, and big projects [like this] will change people’s lives. ” – Ambassador Gardner

In a recent interview with the German newspaper Handelsblatt, US Ambassador the EU, Anthony Luzzatto Gardner spoke about the emotional opposition to TTIP in Germany, suggesting that the way to overcome it is to to use concrete examples, not statistics, to demonstrate how beneficial the agreement will be for Germany.  When asked about his biggest concern for the future of Europe, he responded that to him, the lack of solidarity between member states trumps Brexit or Grexit concerns. (United States Mission to the European Union)

Despite some opposition from the presidential candidates on both sides of the aisle to TTIP,  Commissioner Malmström made it clear that she was determined not to let US campaign rhetoric against free trade jobs stall the TTIP negotiations and that she will continue to try and push forward TTIP negotiations with the goal of having a deal by the end of this year. Beyond the rhetoric on TTIP, some US congressmen have implied they will not vote on the Transpacific Partnership until after a new President is elected. (Reuters)

French Deputy Foreign Minister, Matthias Fekl said earlier this week that France would not accept a TTIP that does not include an investment court system as the one included in CETA. This new system breaks with the practice that has been common for countless trade deals in the last five decades when it comes to settling investor disputes. The United States’ preferred option remains a traditional investor-state dispute settlement panel, known as ISDS. That being said, Commissioner Malmström and US Ambassador to the EU Anthony Gardner voiced their optimism about the prospect of getting the deal done during the Obama administration.  (Handelsblatt)

Sanford Henry, a fellow at British American Business, writes about the distorted picture that the anti-TTIP lobby is painting of TTIP: it portrays the free trade agreement as destructive and dangerous. In reality, it has the power to create markets, jobs and even geopolitical stability, says Henry. To him, TTIP’s importance goes well beyond the simple issue of businesses making money but will be an agreement with profound geostrategic implications with the potential to revive transatlantic political and economic leadership worldwide. (Euractiv)

Michael McKeon, Project Manager for Transatlantic Relations at the Bertelsmann Foundation, gives an in depth briefing of the latest round of TTIP negotiations, explaining that in fact this round of negotiations lasted three weeks, one before and after the official meetings.  Regulatory cooperation and government procurement were among the most discussed issues, with major progress made on discussions on horizontal and vertical regulatory alignment.  (Euractiv)

Defending the Push for TTIP

Victoria Guida writes for POLITICO‘s Morning Trade about the momentum of TTIP negotiations despite the unpredictable election cycles on both sides of the Atlantic.  Cecilia Malmström said, “Just because there is an election, we can’t just stop our activities,” but also implied the possibility of continuing negotiations under another administration.  Addressing the opposition of the presidential hopefuls, particularly Donald Trump’s criticism, Undersecretary of Commerce for International Trade, Stefan Selig said, “[it’s] more than a little bit confusing… Trade is not a threat to American leadership.  It is, in fact, an expression of it.” (POLITICO)

TTIP and Public Procurement: Going Beyond the Tip of the Iceberg

The Center for European Policy Studies (CEPS) conducted research on the much debated issue of public procurement in TTIP negotiations. He found that the European Union is more open than the United States when it comes to public procurement, with growing evidence of discriminatory measures introduced by the United States in recent years, which impede the ability of EU firms to compete on a level-playing field. He concludes procurement, as a key negotiating area, requires better data and calls for greater analytical engagement. (CEPS)

Doug Palmer of Politico analyzes the presidential candidates rhetoric on trade in their campaigns. He finds that the rhetoric has effectively weaponized free trade, turning it into a proxy for corporate greed, in Sanders’ critique, or for government incompetence and politicians who put the interests of corporate contributors over those of everyday Americans, in Trump’s. However, Palmer concludes that it is important to keep in mind that presidents who came out against trade during their campaign usually take a different view once they’re in office.

Find another good analysis on the presidential candidates’ use of anti trade rhetoric in the GlobalPost here.

San Francisco area news paper Contra Costa Times published an editorial this week supporting the TPP, arguing that the main point of the agreement is for the United States to set global trade standards before China does, which is already said to be in separate talks with TPP countries to make an agreement should the TPP fail.  Issues being criticized in the TPP will be far worse in an agreement that is dictated by China, as Chinese standards are usually considered to be much lower than the standards that the TPP would set. (Contra Costa Times)

In an exclusive interview with Euractiv reporter Jorge Valero, Commission Vice President for the Euro and Social Dialogue, Valdis Dombrovskis, talks about the Commission’s duty to uphold EU rules, including the Stability and Growth Pact against the backdrop of global market turbulence, a revolt against EU fiscal rules in Spain and Italy, the Brexit debate in Britain, and the ongoing refugee crisis. According to Dombrovskis, it is in fact even more important to follow prudent economic policies, and to strengthen the resilience of the European member states’ economies to be able to withstand the current turbulence. (Euractiv)

Guillaume Xavier-Bender authors a detailed policy brief for the German Marshall Fund about the strength of economic power in the pursuit of strategic interests. While the European Union yields immense economic power globally, it does not sufficiently leverage this power to achieve political goals. To the author, this is the result of institutional or constitutional constraints and policy choices, and a lack of coordination between member states that often compete for individual interests abroad. He concludes that as Europeans increasingly see the added value of the geopolitics of trade, and of economic diplomacy, the EU Global Strategy should give Europe’s international economic relations their appropriate share of strategic relevance. (German Marshall Fund)

Making a Difference to the World’s Digital Economy: The Transatlantic Partnership

US Secretary of Commerce, Penny Pritzker, and Vice President of the European Commission for Digital Single Market, Andrus Ansip, co-author a blog post for US Department of Commerce about the importance of the EU-US relationship regarding the future digital economy.  The blog post was a lead into their meeting on March 11 at the Massachusetts Institute of Technology (MIT) to discuss the new EU-US Privacy Shield, Europe’s proposal to create a Digital Single Market, and to exchange insights on digital innovation from private sector leaders. (US Department of Commerce)

Putting TTIP on Trial – March 17, hosted by European Movement International, at the Museum of Natural Science in Brussels – More Information
The German Marshall Funds Annual Brussels Forum – March 18- 20, hosted by the German Marshall Fund – More Information
10th Annual Executive Briefing ‘The Transatlantic Economy’ – March 22, hosted by the American Business Forum on Europe, with Senior Fellow at the SAIS Center for Transatlantic, Joseph P. Quinlan, in New York – More Information
And don’t forget: Two more rounds of TTIP negotiations are coming up before the summer of 2016!
This website or its third-party tools use cookies, which are necessary for its functioning and required to achieve the purposes illustrated in the cookie policy.