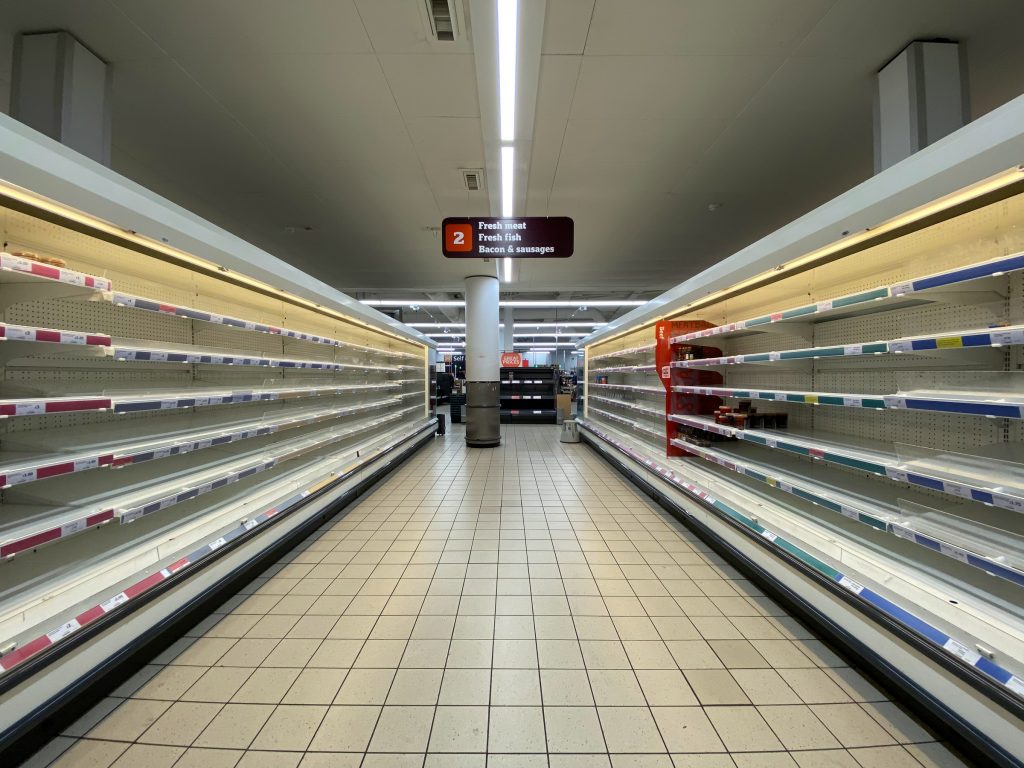 Empty shelves in a grocery store. Photo by John Cameron on Unsplash

If COVID-19 affected half the world’s current population over the course of a year with a 1 percent fatality rate, the death toll would be 35 million. By comparison, the Spanish flu infected an estimated 500 million people and killed 50 million worldwide in 1918-19.

If COVID-19 affected half the world’s current population over the course of a year with a 1 percent fatality rate, the death toll would be 35 million.

This article is part of a longer paper—What world post-COVID-19? Three scenarios. Download the full paper using the button below.

The most rapid spread of the coronavirus at the time of writing is in Europe and the United States, where it is overwhelming health systems. The diverse, late, and staggered applications of social distancing, quarantine, and lockdowns have not arrested the exponential rise of cases and deaths (as of early April 2020). Scenes of stacked coffins and exhausted health workers, several of whom have themselves caught the virus and died, are now no longer an exception.

No one would have imagined such pictures coming from the most developed countries on earth.

The Worst Is Yet to Come

The worst may be yet to come, increasing the risks of a mutated strain of the virus.

Africa, Latin America, and South Asia have only seen small numbers of coronavirus cases because testing is even more unavailable there than in Western countries. However, it is just a matter of time before they are hit by the same large wave that is overwhelming the United States and Europe.

Health systems in the developing world have even less ability to respond.

To take one example, Pakistan’s public health system is extremely ill-equipped to handle any crisis; it only has, for example, 600 ICU beds for the whole Karachi population of 20 million.

Pakistan’s public health system is extremely ill-equipped to handle any crisis; it has only 600 ICU beds for the whole Karachi population of 20 million.

Even as the coronavirus leaves a pile of dead in its wake, we may not be in the clear until a vaccine is discovered and widely distributed.

To avoid a reoccurrence, countries will need to keep their social distancing measures in place and lockdowns enforced where hot spots reappear.  It will be important not to ease up too soon on all restrictions, given the still lingering strain.

Testing will need to continue in order to discover who might be a carrier despite showing no symptoms. Based on the Vò Euganeo experiment—the small village in Veneto, Italy, where all 3,000 inhabitants were tested twice—up to 50 percent of those infected could be asymptomatic, accounting for the larger spread than we would have seen from just the confirmed cases.

Only when the public has been properly vaccinated will the virus be completely conquered.

We need to expect that the coronavirus will continue to mutate, potentially making it harder to develop a vaccine. RNA-based viruses like the coronavirus tend to mutate about 100 times faster than DNA-based ones, although COVID-19 will not mutate as quickly as influenza viruses. Nevertheless, the general notion prevails: the more people are infected, the more of a chance for a mutation. As of late March, scientists had identified eight different strains of the novel coronavirus, all very closely related to each other.

We must be prepared for the coronavirus to become a “recurring fact of life,” like the ordinary flu, but much deadlier.

The pandemic is not just a global health crisis.

In its wake, the global economy lies in tatters, leaving open the question of how and when countries and regions will be able to start a real recovery, if governments must maintain social distancing and other restrictions for some time.

We all hope for a quick V-shaped return to the status quo ante, but there are disturbing signs that the recovery will be difficult and extended, causing substantial damage to the social and political fabric in many regions.

Without a swift global economic recovery, for example, the gains we have seen in the expansion of a global middle class and poverty reduction could be sacrificed. In rich countries where the middle class has already been under pressure, a return of high unemployment and income stagnation could bolster populism and widespread discontent.

The Spanish flu, which hugely added to the death toll from World War I, was a factor in ending the second phase of globalization and sparking conflict in the interwar period.

Number of worldwide fatalities caused by the Spanish Flu.

From a dream of making the world safe for democracy, the post-World War I era ended up leading to the rise of fascism and communism in Europe. The United States turned its back on the world, electing not to join the League of Nations and passing draconian legislation that largely ended immigration.

Will there be a repeat of history in the post-COVID-19 era?

Even before the pandemic started, there were ample signs of deglobalization, rising anti-immigration sentiment, and great power competition. Will the coronavirus, therefore, tip the balance against global cooperation and multilateralism and instead strengthen the forces of nationalism, populism, and authoritarianism?

As in the interwar period, a lack of global cooperation at this critical moment will worsen the ongoing health crisis and make a rapid economic recovery impossible.

The Homeland Under Threat

Currently, the infection rate in the United States (confirmed cases) is still increasing, but at a slower pace than at the end of March.

Based on data from Europe, 5 percent of infected people need ICU treatment or respiratory support. The US Department of Health and Human Services (HHS) estimates that 865,000 US residents would be hospitalized during a moderate pandemic and 9.9 million during a severe one.

A recent study by the American Hospital Association (AHA) “for COVID-19 projected that 4.8 million patients would be hospitalized [in the United States], 1.9 million of these would be admitted to the ICU, and 960,000 would require ventilatory support. [US hospitals only] have 534,964 acute care beds, including 96,596 ICU beds.”

Percentage of ICU beds in constant use before the COVID-19 pandemic hit.

Depending on the extent and length of any quarantine measures, the coronavirus is estimated to peak in the United States in either May or June.

Any economic recovery in the United States will be staggered and potentially slow.

An American Enterprise Institute-developed plan that has reportedly gained traction in the White House indicates such a phased approach: during the current phase, the clampdown measures on businesses and public life would “remain in place until the transmission has measurably slowed down and health infrastructure scaled up to safely manage the outbreak and care for the sick.”

“Individual states can move to Phase II when they are able to safely diagnose, treat, and isolate COVID-19 cases and their contacts. During this phase, schools and businesses can reopen, and much of normal life can begin to resume in a phased approach.

Some physical distancing measures and limitations on gatherings will still need to be in place to prevent transmission from accelerating again.

“For older adults (those over age 60), those with underlying health conditions, and other populations at heightened risk from COVID-19, continuing to limit time in the community will be important.”

Only when “safe and effective tools for mitigating the risk of COVID-19 are available, including broad surveillance, therapeutics that can rescue patients with significant disease or prevent serious illness in those most at risk, or a safe and effective vaccine” can all the various restrictions, including social distancing, be completely lifted.

Throughout this extended recovery, unemployment could rise 15-30 percent depending on how long the most restrictive measures remain in place.

US GDP is estimated to drop significantly in 2020. Goldman Sachs believes the United States could shrink “an annualized 34% in the second quarter” and only “a bit more than half” of the losses could be made up by year-end. With the duration of the crisis growing, Goldman Sachs’ and other forecasts have been increasing their estimates of the unemployment rate and US GDP loss.

Projected peak US unemployment rate as a result of the COVID-19 pandemic—a new post-WWII high.

The recently approved $2.2 trillion economic rescue package will temper some of the immediate impact, but many experts are already calling for further fiscal measures on an even greater scale.

Similar to the 2008 financial crisis, there is a growing risk that the middle class will suffer another drop in its standard of living, particularly if unemployment remains high for a long period.

The United States faces a difficult choice that could have long-term implications.

Scenarios for a post-COVID world

The second of our preliminary post-COVID scenarios features an ascendant China, as it deploys its “Belts and Roads” assistance to own large portions of infrastructure in Asia, Africa and Latin America. A new cold war looms as the U.S. and Europe draw closer to counter a growing China-Russia alliance.

The most hopeful of our three preliminary post-COVID scenarios sees the world drawing together in increased cooperation. A new commitment to better governance leads to the creation of international bodies to counter global threats such as disease, conflict, and climate. Improved international cooperation leads to a V-shaped recovery as as major economies resume growth.

This paper is a preliminary look at the geopolitical implications of the COVID-19 pandemic and sketches three scenarios for the possible direction of the global system post-COVID-19.

US global leadership at risk

The post-COVID world represent a step-change in world order, pushing countries toward isolation and setting the stage for open conflict. The US could still change that outcome.