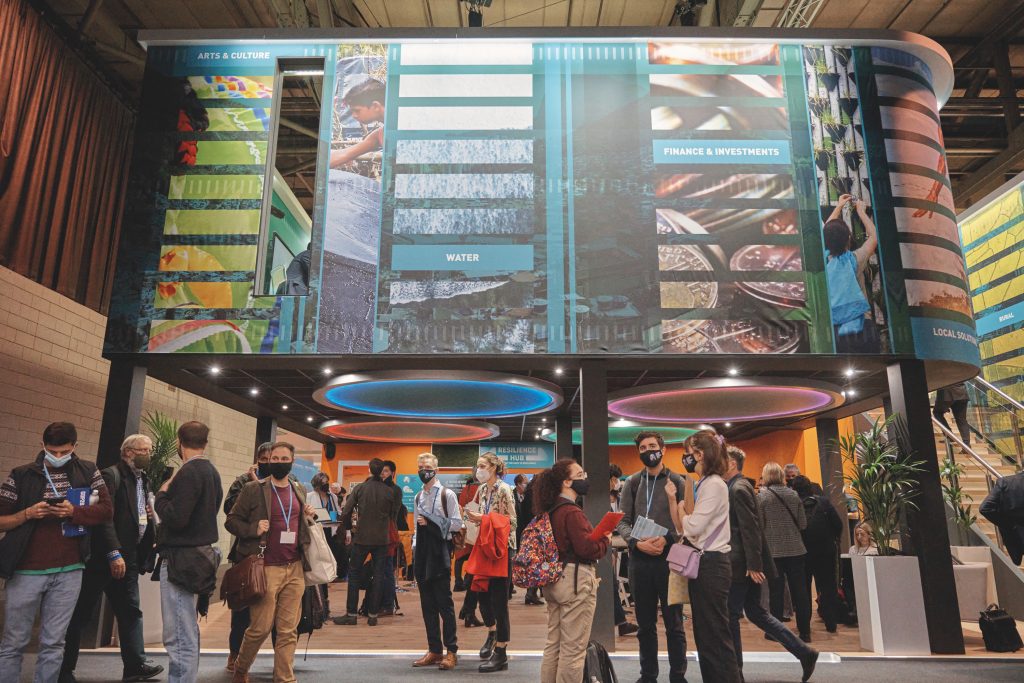 The Adrienne Arsht-Rockefeller Foundation Resilience Center (Arsht-Rock) builds individual and community resilience in the face of climate impacts. We pledge to reach one billion people with resilience solutions to climate change by 2030.

In August, amid devastating heat waves in the northwest United States and Canada, Arsht-Rock released its groundbreaking report Extreme Heat: The Economic and Social Consequences in the United States with analysis by Vivid Economics. The report was cited by a September 20 White House announcement of new US Department of Labor Occupational Safety and Health Administration measures for protecting workers from heat-related illness. The next phase of this research is to bring a similar analysis to twelve cities around the world, including the center’s partner cities and counties.

In November, Arsht-Rock had a strong and highly visible presence at the COP26 Climate Summit in Glasgow, Scotland. The center unveiled the COP Resilience Hub, a physical and virtual space for over 150 events, all co-created and co-managed by the Arsht-Rock team. The center hosted conversations with global partner mayors from Freetown, Miami-Dade County, and Athens, as well as the first-ever dialogue between its chief heat officers. Together with the Atlantic Council’s Global Energy Center, the Arsht-Rock team also convened the first-ever bipartisan congressional delegation to the United Nations Climate Conference in the Resilience Hub. The delegation was led by Senator Chris Coons (D-DE) and included Senator Lisa Murkowski (R-AK) and Representative John Curtis (R-UT). Most notably, the center announced that progress on climate action will now be measured by human lives, in addition to metric tons of carbon or dollars deployed in climate finance.

In December, Arsht-Rock Director Kathy Baughman McLeod was appointed to the Federal Emergency Management Agency’s National Advisory Council. She is the agency’s first-ever climate specialist to work alongside the nation’s most innovative and forward-thinking national, state, and local experts to build and enhance community resilience to climate-related hazards like extreme heat.

“For the first time in history [at COP26], the progress on climate action is being measured by human lives, not only by metric tons of carbon or dollars deployed in climate finance.”

The center also  launched the US Climate Resilience Map, an online tool developed with support from JPMorgan Chase. The map geospatially depicts top climate risks combined with social vulnerabilities for the United States and offers proven and relevant solutions for communities by sharing examples of successful interventions to reduce these risks.

As the pandemic continued into its second year, the center helped 150,000 people in Miami-Dade County with its Resilience Pod and over ten thousand children and their families in Chennai, India to secure food through its Urban Horticulture Initiative.

In 2022, Arsht-Rock will host the first ever Forum for Global Resilience in Miami. The center will launch the first naming and categorization of heat waves pilot in Seville and Athens, as well as design a partnership with the Global Disaster Preparedness Center of the Red Cross to enhance its successful First Aid (FA) app to include extreme heat health education, actionable guidance, and an integrated alert system for heat weather events. The FA app now reaches fifteen million users, and data shows 500,000 “user sessions” in 109 countries.

Finally, the first tier of the center’s gaming strategy, which involves working with some of the biggest gaming companies in the industry, is coming to fruition. People around the world are already playing video games called “Eco” and “Garden Story” and learning actionable information on how to build climate resilience for themselves and their communities. The center is also working to develop workshop modules that can be used by other large companies like EA and Epic Games, as well as mid-level indie game companies at large gaming conventions. This strategy will allow Arsht-Rock to reach millions of people by working directly with writers and incorporating measurable resilience solutions in the first phase of a game’s development.

In 2021 the DFRLab built transparency and accountability online and around the world to promote free and open societies.

Image: The COP Resilience Hub, co-created and co-managed by Arsht-Rock