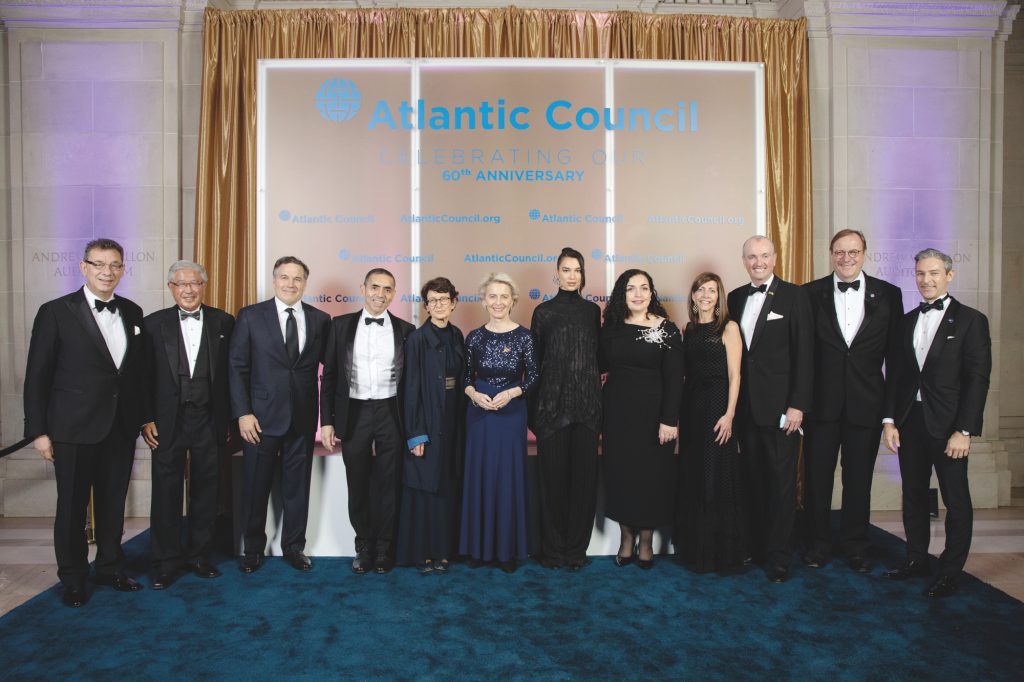 The Atlantic Council Global Energy Forum is the go-to conference for energy and foreign policy leaders to set the energy agenda for the year and examine the longer-term geopolitical and geoeconomic implications of the energy transition.

As part of its programming in partnership with ADSW, the Global Energy Center launched the second edition of its flagship publication, The Global Energy Agenda, with a conversation between Francesco La Camera, director-general of the International Renewable Energy Agency (IRENA); Mele Kyari, group managing director of the Nigeria National Petroleum Corporation; Majid Jafar, CEO of Crescent Petroleum; Helima Croft, managing director and head of global commodity strategy at RBC Capital Markets; and Ambassador Daniel Fried. Two additional panels addressed the role of hydrogen in the energy transition and examined the divergent pathways to net-zero emissions that different countries might take.

In March 2022, the Global Energy Center convened the Global Energy Forum in person—alongside the closing of Expo 2020 in Dubai and in conjunction with the 2022 World Government Summit—and held under the patronage of His Highness Sheikh Mohammed bin Zayed Al Nahyan, crown prince of Abu Dhabi and deputy supreme commander of the United Arab Emirates Armed Forces. The forum was convened in partnership with the Ministry of Energy and Infrastructure of the United Arab Emirates, Abu Dhabi National Oil Company (ADNOC), Masdar, and Mubadala Investment Company. Crescent Petroleum was a platinum co-chair, and RBC Capital Markets, Siemens Energy, General Electric, GS Energy, and Saudi Aramco were gold partners. CNBC served as the forum’s international media partner.

AC Front Page is our premier live ideas platform, featuring the world’s most important leaders discussing the challenges of our time.

Founded in April 2020 in response to the global pandemic, the Atlantic Council Front Page harnesses the convening power and expertise of the Council’s fifteen programs and centers to spotlight the world’s most prominent leaders and the most compelling ideas. Through purposeful and thought-provoking conversations, the virtual platform engages a global audience eager for nonpartisan and constructive solutions to current challenges. This widely promoted platform features the Council’s most important guests and content, serving as the highlight of our programming.

The Atlantic Council Front Page has become a platform of choice for leading government, business, and civil society leaders given the high level of discussion, its superior-quality production value, and its reach to a globally relevant audience. Select global leaders who joined the series in 2021 include President of France Emmanuel Macron, His Royal Highness The Prince of Wales, President of the European Council Charles Michel, Secretary General of NATO Jens Stoltenberg, Chairman of the House Committee on Foreign Affairs Gregory Meeks, WTO Director-General Ngozi Okonjo-Iweala, and leader of the democratic opposition in Belarus, Sviatlana Tsikhanouskaya, among many others.

360/Open Summit: Bringing Together Those Committed to Democracy Over Disinformation

The summit’s theme, the “World in Motion,” shed light on the urgent challenges that converged and accelerated in 2021 as COVID-19 sped digitization and supercharged long-running trends upending the world.

On May 5-7, 2021, the Atlantic Council, in partnership with the Delegation of the European Union to the United States, held the EU-US Future Forum (EUFF), a three-day conference bringing together top policymakers and experts to celebrate the US-EU relationship and provide a platform to discuss and debate the future of the historic relationship across a range of issues including COVID-19 recovery efforts, transatlantic digital policy, trade cooperation, climate change, European defense, and more.

The forum was one of the first and largest gatherings of transatlanticists since the inauguration of the Biden administration. With over ninety speakers from twenty-one countries, EUFF served as the premier platform for world leaders to discuss the transatlantic partnership.

The EUFF’s sessions included joint appearances by US and European policymakers like US Secretary of Energy Jennifer Granholm and her counterpart in the European Commission Kadri Simson, US Senator Chris Murphy (D-CT), European Commission Vice-President Věra Jourová, and US Senator Jeanne Shaheen (D-NH) and then President of Estonia Kersti Kaljulaid. The EUFF also featured US Deputy Secretary of State Wendy Sherman for her first public appearance since confirmation and then co-leader of the German Greens and now German Foreign Minister Annalena Baerbock.

We convene in Washington DC, internationally, and virtually to inspire global engagement and to shape solutions to the defining challenges of our times. Through small, focused events and larger public gatherings, we inform and build connections.