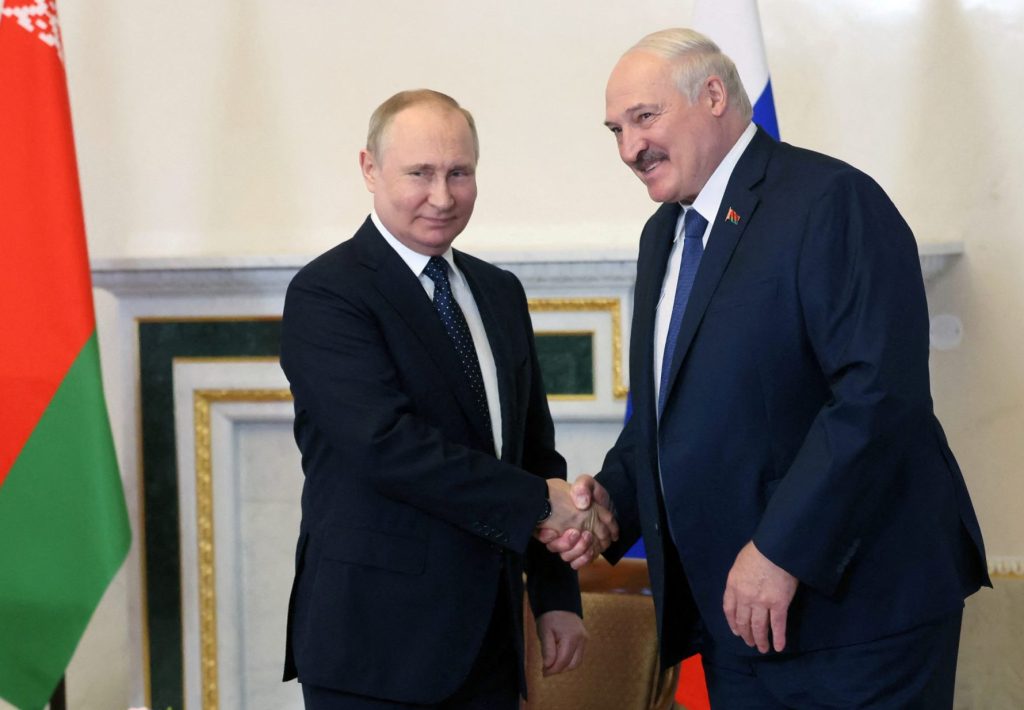 As Russian rhetoric toward Lithuania continues to escalate, Belarusians once more find themselves caught up in the Kremlin’s aggressive foreign policy thanks to Belarus dictator Alyaksandr Lukashenka’s complete dependence on Moscow.

Lithuanian officials have recently sparked fury in the Kremlin by implementing EU sanctions on goods transiting through the Baltic nation to Russia’s Kaliningrad exclave. The move has dramatically heightened tensions between the two countries amid Lithuania’s strong support for Ukraine and recent debate in Moscow about the need to cancel recognition of Lithuanian independence.

For both geographical and geopolitical reasons, Belarus has a prominent role to play in the unfolding drama between Moscow and Vilnius. Belarus is sandwiched between Russia and Lithuania, making it the obvious location for Kremlin saber-rattling. Meanwhile, Lukashenka’s personal reliance on his political patron Vladimir Putin means that he has little option but to serve as sidekick to the Kremlin strongman in this latest geopolitical standoff.

Underlining the threat posed Russia’s unofficial annexation of Belarus, Lithuanian President Gitanas Nausėda last week called for a more visible NATO presence in the Baltic region. Speaking to Politico on June 24, he described Belarus as an “additional province” of Russia and warned that Putin’s military could now do whatever it wants in the country.

With fears rising over a new flashpoint in the Baltic, it is important not to underestimate the possibility of Belarus entering Russia’s ongoing invasion of Ukraine. Belarus served as a platform for the northern front of the initial invasion in February 2022. Lukashenka has since allowed Russia to launch hundreds of airstrikes against Ukrainian targets from Belarusian territory and the country’s airspace. The recent escalation in Moscow’s air war on June 25-26 saw dozens of missiles fired from Belarus.

Speculation continues that Belarus may soon join the ground war with troops entering Ukraine from the north. The Belarusian military began a new round of nationwide exercises on June 22 with a focus on the transition from peacetime to wartime. The drills inevitably sparked comparisons with the early 2022 joint exercises with Russia that served as cover for preparations ahead of Moscow’s February 24 invasion of Ukraine.

Independent observers have also noted heightened military activity in the Homiel region of southern Belarus close to the Ukrainian border. This has included the deployment of Russian missile systems. Ukrainian defense officials have recently claimed that work is underway on the construction of a Russian army base in the region amid an increased Belarusian military presence throughout the border area.

Putin sparked concerns over a possible further escalation during his June 25 meeting with Lukashenka in Saint Petersburg. The Russian dictator promised to deliver nuclear-capable Iskander-M tactical missile systems to Belarus in the coming months.

The two authoritarian leaders are expected to meet again on June 30-July 1 at the Regional Forum of Belarus and Russia. The event will take place in Belarusian city Hrodna, just a few kilometers from the border with Lithuania. This will be Putin’s first trip outside Russia since he launched the full-scale invasion of Ukraine and will underline Belarus’s status as Russia’s last remaining reliable ally.

While details are not yet available, there are expectations that a range of cooperation and integration agreements will be signed at the Forum related to aspects of the Union State agreement between Belarus and Russia. This bilateral pact has been in place since the late 1990s but has remained somewhat vague. However, with Russia now locked into a long-term confrontation with the Western world and Lukashenka no longer able to detach himself from the Kremlin, Putin may seek to place the merger of the two countries on a more official footing.

Many Belarusians will view their country’s involvement in the escalating confrontation between Russia and Lithuania with dread. There is already widespread disquiet and anger within Belarusian society over Lukashenka’s junior role in Russia’s war against Ukraine. Numerous polls have indicated strong anti-war sentiment in Belarus, while opposition has also resulted in efforts to sabotage the Belarusian railway network in order to prevent the transit of Russian troops and military equipment.

The unpopularity of Russia’s Ukraine war among ordinary Belarusians is believed to have helped discourage Lukashenka from directly participating in the invasion. The Belarus dictator is anxious to avoid upsetting the country’s military and fears potential mutiny if he gives the order to invade. He is also acutely aware that the anti-regime mood that sparked nationwide protests in 2020 has been suppressed but not extinguished, despite the presence of over 1,200 political prisoners currently languishing in Belarusian prisons.

Lukashenka has good reason to avoid deeper involvement in further Russian acts of international aggression but he may ultimately have little choice. This poses grave security challenges for both Ukraine and Lithuania. It is also potentially disastrous for the Belarusian population, which continues to face the grim consequences of Lukashenka’s surrender of sovereignty to the Kremlin.

Renewed Belarus military buildup is a sign of Lukashenka’s desperation

Belarus dictator Alyaksandr Lukashenka is saber-rattling on the Ukrainian border once again but it is unclear whether he is genuinely preparing to invade Ukraine or merely seeking to demonstrate his loyalty to Putin.