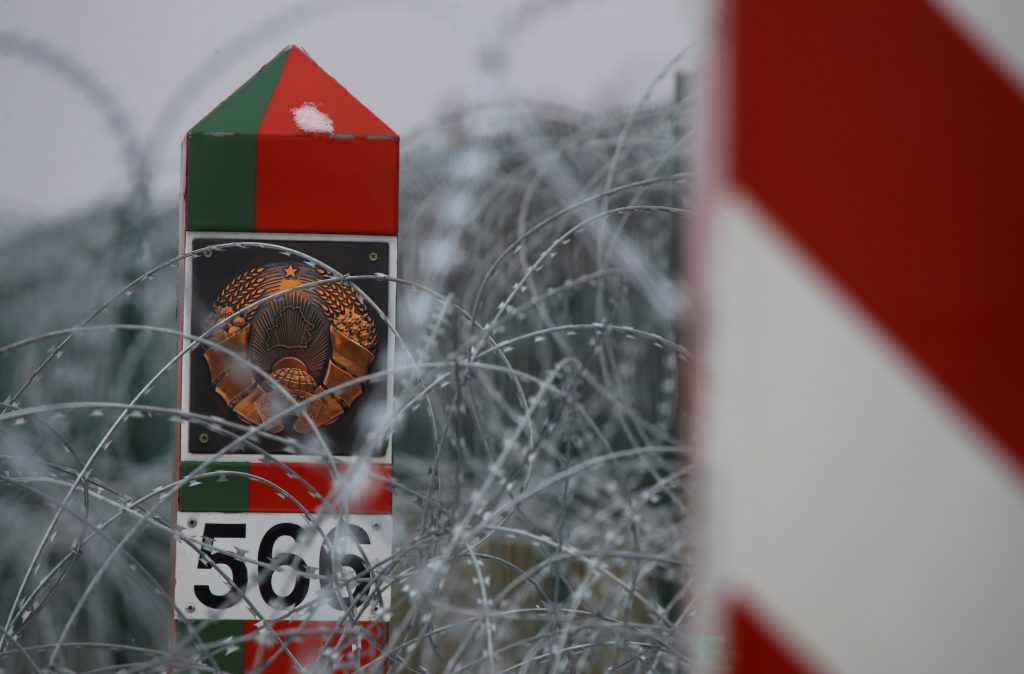 As 2021 draws to a close, a new Iron Curtain appears to be descending upon Eastern Europe.

In the past two weeks, Belarus dictator Alyaksandr Lukashenka has dropped his longtime resistance to recognizing Moscow’s annexation of Crimea. He has declared that he is willing to host Russian nuclear weapons on Belarusian soil, and threatened to block gas shipments to Europe. Meanwhile, Belarusian banks are preparing to be cut off from the SWIFT international payment system and are signing up with an upstart Russian alternative.

With Russia massing troops on the Ukrainian border and fears of an all-out invasion mounting, Lukashenka has already declared his absolute fealty to Moscow. And his recent moves suggest he is laying the groundwork for a new reality: a divided Europe with Belarus firmly embedded in the Moscow-dominated east.

In an interview on November 30 with RIA-Novosti, Lukashenka said Crimea was always “de facto Russian” and that now it was “de jure Russian.” Lukashenka added that he planned a trip to the occupied Ukrainian peninsula together with Kremlin leader Vladimir Putin to demonstrate his formal recognition.

This marks a sharp reversal for Lukashenka, who since 2014 had refused to formally recognize Crimea as part of Russia. At one point, he even ridiculed the logic used by Moscow to justify the annexation, saying that Mongolia could just as easily lay claim to large swaths of Russian territory.

The flip-flop on Crimea, combined with Lukashenka’s decision to abandon Belarusian neutrality in Russia’s aggression against Ukraine, marks the end of a foreign policy balancing act that had previously seen Lukashenka position Minsk between Russia and the West. In case anybody failed to grasp this shift, the Belarusian autocrat recently stated pointedly that he would “do everything to make Ukraine ours. It is our Ukraine.”

In a commentary for the Moscow Carnegie Center, Belarusian political analyst Artyom Shraibman noted, “the achievements of five years of an actively multi-vectoral foreign policy by Minsk from 2014 to 2019 have lost value. The bonuses that Belarus earned by distancing itself from Russia have vanished and will not return any time soon, given the extent of the West’s dismay over human rights abuses in Belarus. And if Minsk had continued to pretend to be neutral in the current situation, it would have risked eliciting the ire of Moscow too.”

Russian Deputy Foreign Minister Sergei Ryabkov appeared to endorse Lukashenka’s proposal on December 13, saying Moscow might deploy intermediate-range nuclear missiles in Europe in response to what it claims are NATO’s plans to do the same.

NATO has denied any intention to station nuclear weapons in Eastern Europe. But there has been speculation that in the event of a full-scale Russian invasion of Ukraine, the alliance would beef up its troop presence on its eastern flank, primarily in the Baltic states and Poland.

Lukashenka’s recent threat to cut off gas supplies to Europe, along with efforts by Belarusian banks to prepare alternatives should they be barred from the SWIFT payment clearing system, are indicative of another aspect of a divided Europe: the decoupling of Russia and Belarus from the global financial and economic system.

On December 12, US Secretary of State Anthony Blinkin said the United States and its European allies were prepared to “take the kinds of steps we’ve refrained from taking in the past that would have massive consequences for Russia.”

Speculation about what those steps might be has focused on three areas: barring Russia from SWIFT, sanctioning Russian sovereign debt on both primary and secondary markets, and ending the Nord Stream 2 gas pipeline.

In light of Belarus’s integration with and dependence upon Russia’s economy, such measures would de facto target Belarus as well. This is entirely appropriate, given Lukashenka’s active support for Moscow’s revanchism.

A new Iron Curtain is emerging along the western frontiers of Russia and Belarus. Over the past year, Putin has successfully solidified Moscow’s dominance over Belarus. The Kremlin leader now appears determined to subdue Ukraine by force.

The West needs to play a long game in Belarus, punishing the Lukashenka regime while patiently engaging civil society. With Ukraine, whose government and society have chosen a democratic European future, the escalating crisis is taking on the character of a major geopolitical emergency. The United States and its allies need to do everything possible to keep Ukraine safely on the western side of the new Iron Curtain dividing Europe.