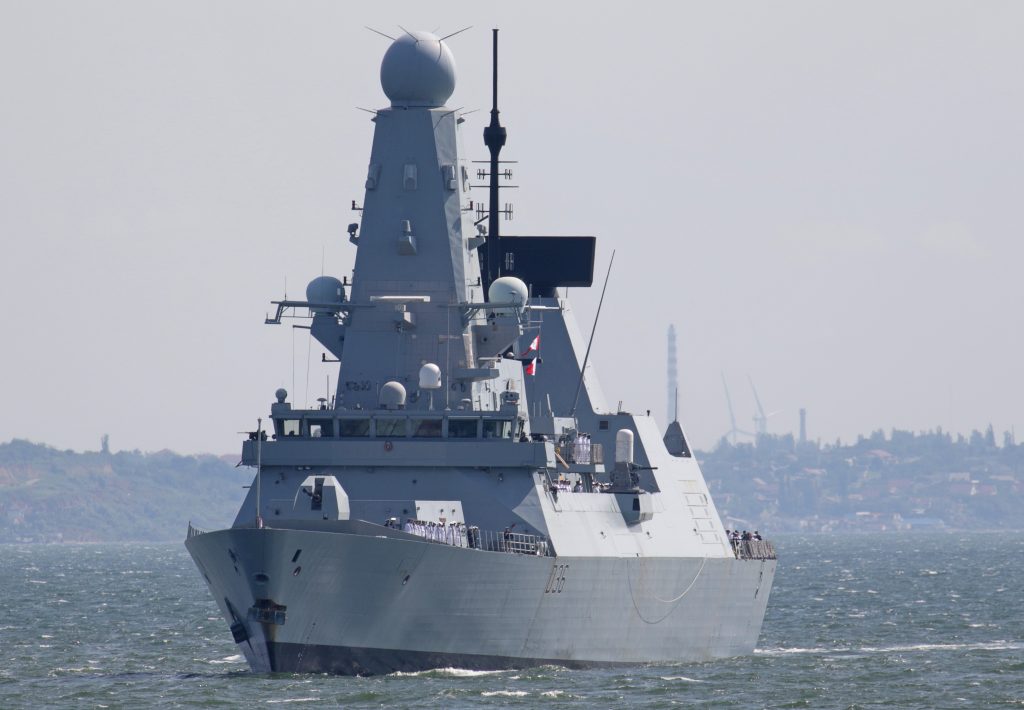 British Royal Navy warship HMS Defender sparked dramatic scenes in the Black Sea on June 23 by passing deliberately close to Russian-occupied Crimea while sailing from the Ukrainian port of Odesa to Batumi in Georgia. The British vessel’s choice of route through territorial waters off Crimea was seen as a direct challenge to the Kremlin and a reminder that the international community does not recognize Russia’s purported 2014 annexation of the Ukrainian peninsula.

The presence of a British warship in what Moscow regards as Russian territorial waters sparked a predictably volatile response. The Kremlin deployed naval vessels and warplanes in an attempt to force HMS Defender to change course, while claiming to have fired warning shots and dropped bombs close to the British ship. However, UK officials rubbished these claims. British Foreign Secretary Dominic Raab described Moscow’s version of the incident as “predictably inaccurate,” and confirmed “no shots were fired at HMS Defender.”

Speaking on the day after the Black Sea confrontation, British Prime Minister Boris Johnson insisted the Royal Navy had been correct to defend freedom of navigation and underlined that Britain does not recognize Russia’s attempts to annex Crimea. “These are Ukrainian waters and it was entirely right to use them to go from A to B,” he commented.

Meanwhile, in a statement to UK members of parliament, Defense Secretary Ben Wallace stressed that the Royal Navy “will always uphold international law and will not accept unlawful interference with innocent passage.”

This week’s incident underlined growing naval tensions in the Black Sea, where Russia is attempting to capitalize on the ongoing occupation of Crimea to strengthen its already dominant maritime position in the region.

Russia first seized control of Ukraine’s Crimean peninsula in early 2014 with a lightning military operation that capitalized on post-revolutionary disarray in Kyiv and caught the international community completely off-guard. However, Moscow’s attempts to legitimize this armed takeover via a hastily staged fig leaf referendum fell flat and were widely rejected. As a result, Crimea remains under Russian occupation but is still regarded by the international community as part of Ukraine.

Control over Crimea has greatly expanded Russia’s maritime footprint. Since 2014, this has enabled Moscow to take a number of steps designed to restrict Ukrainian shipping in the Black Sea and the nearby Azov Sea.

In November 2018, Russia sparked a minor diplomatic crisis when it attacked and captured a small flotilla of three Ukrainian ships as they attempted to pass through the Kerch Strait connecting the Black Sea and the Azov Sea. The clash was seen as a significant escalation in the undeclared war between the two countries. The Russian Navy has also regularly disrupted merchant shipping moving to and from Ukraine’s Azov Sea ports in what critics say amounts to a partial blockade.

Russia’s numerous acts of maritime aggression have let to result in any additional international sanctions. This apparent reluctance to impose further costs has fueled fears in Kyiv that an emboldened Kremlin may seek to expand its naval blockade and cut Ukraine off from the Black Sea altogether. In spring 2021, existing concerns over Russia’s naval plans deepened when Moscow moved a number of additional ships to the Black Sea.

With this looming maritime menace very much in mind, many Ukrainian observers were understandably pleased earlier this week to see the British Navy defy the Kremlin and openly challenge Russia’s claims to the territorial waters around occupied Crimea. Former Ukrainian Prime Minister Arseniy Yatsenyuk captured the mood in Kyiv when he tweeted: “The British warship made it clear: Crimea is Ukraine. Thank you, Her Majesty’s Royal Navy.”

Russia’s rapid mobilization of air and sea power on Wednesday, along with Moscow’s subsequent threats to respond with force to any further “provocations,” highlighted the potential for future escalations in the Black Sea if tensions continue to mount.

“This week’s incident with HMS Defender is part of a pattern,” notes Atlantic Council Nonresident Senior Fellow Brian Whitmore. “Russia has de facto annexed the Azov Sea and fired on three Ukrainian ships traveling through the Kerch Strait in 2018, holding these ships and 24 captured Ukrainian sailors for more than six months. Additionally, Russia has routinely intercepted US and UK military aircraft in international airspace over the Black Sea. These illegal and dangerous moves by Russia must be strenuously resisted by the United States and its allies.”

Amid the flurry of headlines over Wednesday’s naval confrontation and the war of words between Moscow and London, some commentators have also been calling for a sense of perspective. Brookings Institution Senior Fellow and former US Ambassador to Ukraine Steven Pifer branded the incident “a tempest in a teapot.”

Pifer believes Moscow saw the encounter as an opportunity to reinforce its messaging and bolster Kremlin claims of Western hostility towards Russia. “Moscow played this up as a major incident in which Russian ships and aircraft defended Russia, even though Russian military officers on the scene almost certainly understood that the incursion within the 12-mile limit would be peaceful and short. Moscow’s chest-thumping was aimed as much as anywhere at the Russian domestic audience to support the Kremlin narrative of a beleaguered Russia defending itself against constant pressure from the West.”

While Pifer predicts that the fuss over this particular story will soon blow over, he warns that we should expect sequels. “Russia will continue to assert itself as the major Black Sea power, while other littoral states and NATO members will continue to challenge that.”