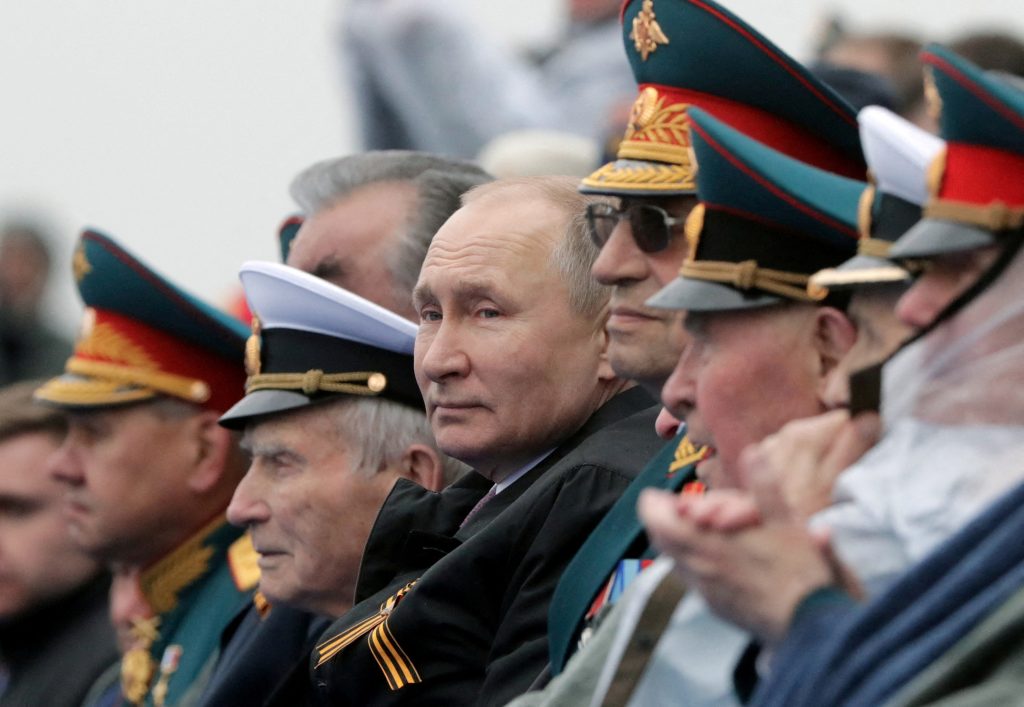 Vladimir Putin’s autocratic regime is busy planning for a new empire and the preparations include more than just troop deployments.

In one sign of how far the imperial planning has apparently progressed, Moscow is already beginning to design flags and coats of arms for a new state that would include Russia, Belarus and Ukraine, according to a recent article by historian Sergei Makin in Nezavisimaya Gazeta.

And as plans proceed to design the symbols of empire, pro-Kremlin pundits and opinion leaders are weighing in on which former Soviet nations should be granted the privilege of being Moscow’s new vassals. Political scientist Valery Kaplenkov argued in a recent article that a new Russian empire should be Russo-centric, avoid amorphous multi-nationalism, and concentrate on incorporating Slavic countries like Belarus and Ukraine but not the Caucasus and Central Asia.

“Russia has a unique chance to combine in the future models of state arrangements two kinds of statehood, imperial and national,” Kaplenkov wrote. But for that to happen, he added, “the geographic borders of the new Russian state need to be somewhat different from those of pre-revolutionary Russia or the Soviet Union.”

According to Kaplenkov, this imperial expansion should begin with Belarus and Ukraine, but would not end there.

“Russia can and should geographically expand only in the most difficult, western direction. NATO and the European Union, of which the Baltic republics are members and which Ukraine and some forces in Belarus dream of joining, are not eternal,” he wrote. “The North Atlantic alliance and the European Union had a beginning and will have an end. In their place other blocs will come, most likely, more local ones. And Russia will have a real opportunity to return the historical territories that were part of ancient Russia, and later, the empire of the times of Peter and Catherine.”

As the symbols and forms of a new empire are being pondered in Moscow, the Putin regime is accelerating its deployment of troops and military hardware to Belarus. According to NATO estimates, Russia will have as many as 30,000 troops in Belarus this month, ostensibly for military exercises that are scheduled for February 10-20.

New satellite images from the US-based Maxar Technologies show Russian forces moving through Belarus and creating field camps close to the Ukrainian border. The images show military hardware near the towns of Yelsk, Rechitsa and Luninets, all of which are within 50 kilometers (30 miles) of the Ukrainian border. The military hardware being deployed includes tanks, howitzers, infantry fighting vehicles, S-400 air defense systems, Su-25 attack aircraft, and Iskander ballistic missiles.

The military build-up in Belarus is setting off alarm bells across Europe. A group of 77 members of the European Parliament signed an open letter to European Union leaders on February 1 saying that the Russian troop deployments “should be treated as an occupation of Belarus.” The letter’s signatories also said the Russian military build-up “poses a threat to Ukraine, Poland, Lithuania, Latvia and the whole of Europe.”

Lithuanian Prime Minister Ingrida Šimonytė called the Russian troop deployment in Belarus, “a 1938 moment for our generation,” in reference to the year that Nazi Germany annexed Austria and partitioned Czechoslovakia, setting the stage for World War II.

The military deployments to Belarus are, of course, taking place as Russia continues to concentrate troops and equipment close to Ukraine. According to Ukrainian Defense Minister Oleksiy Reznikov, Russia has massed a total of at least 115,000 troops near Ukraine’s borders. Other estimates place the total at 130,000.

Meanwhile, senior officials in the administration of US President Joe Biden told members of Congress last week that Russia has assembled 70 percent of the forces necessary to launch a full-scale invasion of Ukraine.

The Russian troops now in Belarus could potentially play a key role in any new offensive. “The biggest danger is that Ukrainian forces are mainly concentrated in the east of Ukraine, but the closest route to Kyiv is from Belarus,” former Ukrainian Prime Minister Arseniy Yatsenyuk said in remarks reported by the EU Observer.

Even if Putin ultimately decides not to launch another invasion of Ukraine in the coming weeks, the troop deployments to Belarus put Moscow in a position to dominate its smaller but strategically vital western neighbor, control its politics, and eventually complete its ongoing soft annexation.

The Russian political and military analyst Pavel Luzin wrote recently, “Moscow can prepare for the development of events in the Belarusian direction, and not in the Ukrainian direction,” adding, “Belarus is a good springboard both for increasing pressure on Ukraine and for tougher bargaining with the West on European security issues.”

Ukraine and Belarus are the first targets in Putin’s quest to revive the old empire in some form. And while the world watches Russia’s brinkmanship against Ukraine, Moscow is swiftly and quietly completing the takeover of Belarus.