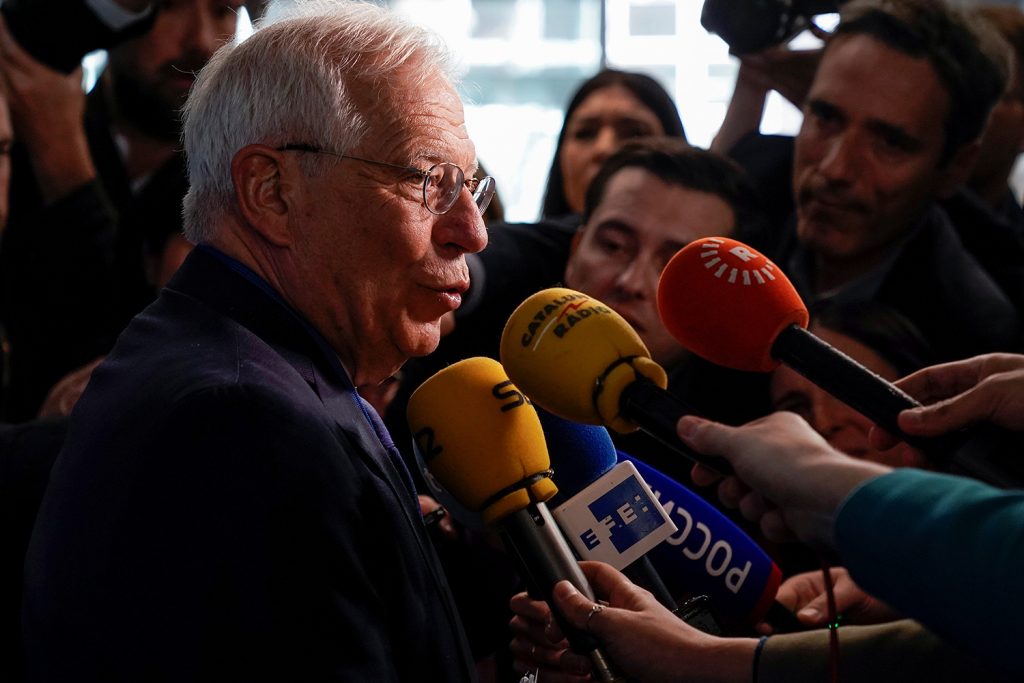 That’s how Josep Borrell, the EU’s high representative for foreign affairs and security policy, summarized the view from Brussels in a February 23 conversation with Benjamin Haddad, director of the Atlantic Council’s Europe Center.

“It was music to our ears” to hear US Secretary of State Antony Blinken speak to the EU Foreign Affairs Council on February 22 about repairing and revitalizing the US relationship with Europe, he said. “What the new Biden administration is doing is fitting with everything we wanted: working with allies, recognizing the importance of the EU, and considering the EU not just as a partner but as a friend,” Borrell said during the Atlantic Council Front Page event.

“The EU was created inwards in order to solve problems among Europeans… in a bipolar world,” he observed. “Today we’re in a multipolar world and we have to look outwards because the problem is no longer among us; it’s among us and the rest of the world.”

In the global race to vaccinate as many people as possible, Europe finds itself at a disadvantage, Borrell noted.

“China, Russia, and India are moving very rapidly to facilitate vaccines for the rest of the world, giving priority, in the case of Russia, to offer vaccines to [other] countries even before vaccinating their own population,” he said. “Yet in Europe, we are facing a shortage of vaccines, and most of the vaccination process has had to stop.”

But, he added, “we don’t abandon the idea that we need to vaccinate the whole world, not just ourselves, because nobody will be safe until everybody is safe.”

To that end, Borrell said that as part of its coronavirus response the EU has doubled its contribution to the COVAX Facility from €500 million to €1 billion. The COVAX Facility aims to deliver 1.3 billion doses to ninety-two low- and middle-income countries by the end of 2021.

“Globally, we need to ramp up production,” Borrell said. “In one year, the world will have plenty of vaccines, but the political problem today is to provide vaccines, even in smaller quantities, to member states of the EU… that don’t have the capacity of producing vaccines by themselves.”

The EU’s soured relationship with Russia

Following his recent trip to Moscow, which occurred just days after the jailing of opposition leader Alexei Navalny, Borrell acknowledged the poor state of relations between Brussels and the Kremlin. During the visit, Russian Foreign Minister Sergei Lavrov had called the EU “an unreliable partner” and the Russian government had expelled diplomats from Sweden, Poland, and Germany for allegedly joined street protests in support of Navalny.

“I went to Moscow with two purposes: to raise concerns on the Navalny case and the crackdown on demonstrations and also to explore the possibility of having a positive agenda with Russia,” he said. “But their aggressive reaction shows they see democratic values as a threat.”

Indeed, he continued, “the Putin regime is using every means—including a lot of disinformation—to ensure their survival, and fighting against the opposition. This experience has shown us that Russia doesn’t want to engage with the European Union because for them, what we represent—liberal values and democracy—is considered an existential threat they cannot live with.”

In response, Borrell argued that the EU should take three courses of action: push back against Russia whenever the country violates international or humanitarian norms; contain Russia when it increases pressure on the EU, especially via cyberattacks; and engage with Russia in certain areas “where it is in our interests to do so.”

The EU has been “naïve” with China

In contrast to the EU approach to Russia, the bloc’s relations with China are more complicated. Beijing is at once a partner, a competitor, and a rival depending on the issue at hand, according to Borrell.

Borrell defended the new EU-China Comprehensive Agreement on Investment (CAI) as a means of providing better access to the Chinese market for European companies in sectors such as manufacturing, cars, financial services, healthcare, and telecommunications. He added that the CAI, which must still be ratified by the European Parliament, will also require China to improve labor standards.

“We have been, from an economic point of view, very much naïve with China, and now it’s time to level the playing field and require reciprocity,” he said. “This agreement is a first step in this direction. But apart from the US, we also need to work with other like-minded countries, starting with Japan, India, Australia, and [the Southeast Asian intergovernmental organization] ASEAN.”

“What we don’t want is to start—like the previous [US] administration was considering—a new kind of Cold War. We are rivals, but it doesn’t mean we are in a permanent rivalry with China,” Borrell said, adding that “with the new administration, I’m sure it will be much easier.”

A “window of opportunity” on Iran

Borrell said US President Joe Biden’s offer to restart talks with Iran on its nuclear program is welcome news for the EU. But he warned that “you will never restart” negotiations over reviving the 2015 nuclear deal with Iran, or Joint Comprehensive Plan of Action (JCPOA), by lumping in non-nuclear topics—including Iranian ballistic missiles aimed at Israel and the Gulf states, or Iran’s support for terrorist groups in the region such as Hezbollah and Hamas.

“Maybe there are other issues that have to be taken into consideration, but don’t put everything together at the same time, because then you’re going to block the process,” Borrell warned.

Borrell said that the EU had been trying to jumpstart negotiations to save the Iran deal when the Trump administration unilaterally withdrew the United States from the agreement in May 2018. “Until this moment, Iran was fulfilling 100 percent of their nuclear commitments. And they continued fulfilling them for quite a long time,” he said. “Now they’re not doing it.”

Despite Tehran recently taking several steps in violation of the JCPOA, Borrell said a February 21 agreement reached with the International Atomic Energy Agency will give the agency three more months to verify and monitor nuclear activity in Iran.

“We have a window of opportunity, and we have to use it,” he argued. “This requires Iran to come back to full compliance [with the JCPOA], and also sanctions relief” for Iran.

Borrell dismissed criticisms that the EU only agrees with—but does nothing to support—the idea of welcoming Balkan countries such as Serbia, Montenegro, and Bosnia and Herzegovina into the bloc at some future date.

“It is not fair,” he said, for others to suggest “that we pretend to be ready to accept them as members, but in fact we don’t want to.”

“The Western Balkans [have] a future in the EU, but these countries have to do their homework,” he said. “They have to meet our standards in order to be accepted.”

Recognizing “growing geopolitical competition” in the Balkans—with Russia, Turkey, and even China all expanding their influence in the region with economic aid and vaccines—Borrell said that it’s imperative for the EU to continue on its path to enlargement. EU accession talks for Albania and North Macedonia will soon begin, he noted, while EU-sponsored negotiations continue between Serbia and Kosovo.

“These reforms are not because the European Union wants [them]; the citizens of these countries need [them],” Borrell said. “To have an independent judiciary and get rid of corruption—with the European perspective or without it—is a way of building modern societies.”

“With the new Biden administration, there is [in] Europe a feeling of hope and the expectation that it will be possible… to rebuild a very strong alliance—what I have called a ‘new founding pact’ between the United States and Europe,” said European Council President Charles Michel.