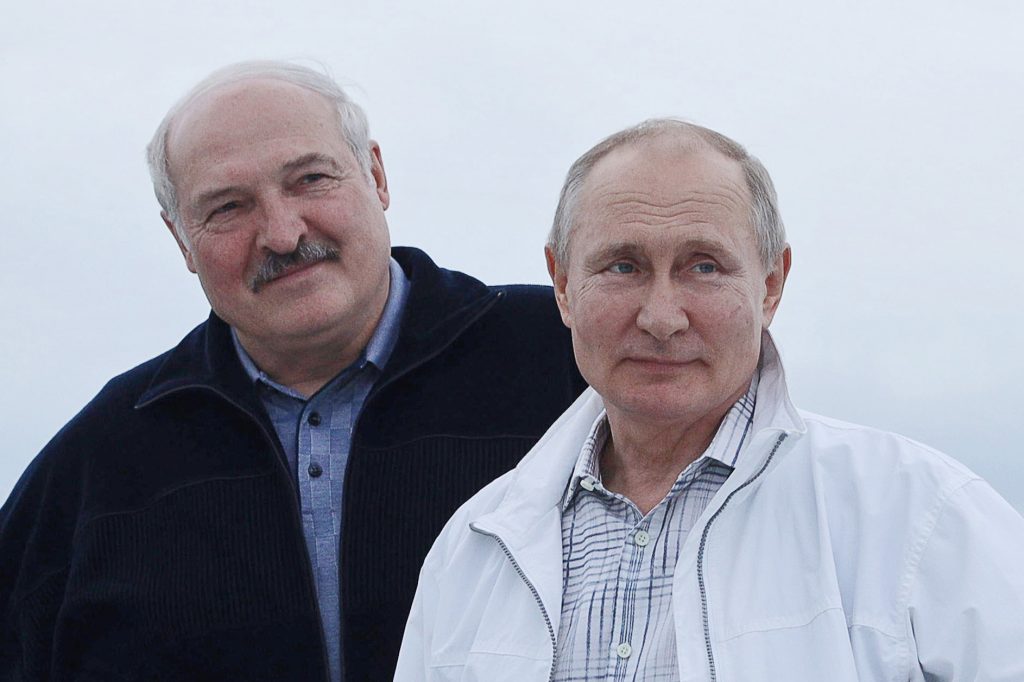 The axis of autocrats in Eastern Europe continues to solidify as Belarus dictator Alyaksandr Lukashenka bends over backwards to please his patrons and masters in the Kremlin.

In the wake of last month’s summit meeting with Vladimir Putin in Sochi, Lukashenka has made two announcements that effectively indicate he is prepared to recognize Russia’s illegal annexation of Crimea as well as the de facto sovereignty of the Kremlin-controlled “separatist republics” in eastern Ukraine’s Donbas region.

Lukashenka told reporters on June 1 that Belarusian national airline Belavia would begin flying to Crimea, which observers interpreted as the first step toward formally recognizing Russia’s annexation of the peninsula.

In televised remarks on the same day, Lukashenka also said he would allow investigators from the so-called Luhansk People’s Republic in Russian-occupied eastern Ukraine to interrogate dissident journalist Raman Pratasevich, who was effectively kidnapped after Belarus forced a Ryanair flight en route from Athens to Vilnius to land in Minsk on May 23. Separatist leaders in eastern Ukraine have accused Pratasevich of fighting with the Azov Battalion, a Ukrainian National Guard unit with far-right links.

While Pratasevich participated in the Euromaidan protest movement that ousted pro-Kremlin Ukrainian leader Viktor Yanukovych in 2014 and subsequently covered the Azov Battalion as a journalist in 2015, there is scant evidence that he fought with the unit. Efforts to claim that he did fight appear to stem from a concerted Russian-backed disinformation campaign to smear him as a neo-Nazi, one which the Belarusian authorities have enthusiastically joined.

In its weekly unpublished confidential report, the Minsk-based Center for Strategic and Foreign Policy Studies noted that Lukashenka’s recent announcement of the decision to open air traffic to Russian-occupied Crimea amounts to “a political decision to recognize Russian jurisdiction over the peninsula.”

Likewise, the decision to allow Donbas separatists to interrogate Pratasevich “hinted at the possibility of partial recognition for the independence of the separatist republics in eastern Ukraine.’’ According to the report, these developments represent “a radical turnaround from Minsk’s earlier (and still declared) policy” of playing the role of an honest broker in Russia’s war in Ukraine.

To appreciate how radical a departure this is, all one needs to do is turn the clock back to 2014, when Russia’s annexation of Crimea and armed intervention in the Donbas led to fears on the part of Lukashenka and much of the Belarusian elite that the country’s fragile sovereignty could also be in jeopardy.

In hosting the initial Minsk peace talks in September 2014 and February 2015, which included the leaders of Ukraine, Russia, Germany, and France, Lukashenka tried to position himself as credible mediator between Moscow and Kyiv.

Lukashenka pointedly refused to recognize Crimea as part of Russia and even ridiculed the logic used by Moscow to justify the annexation, saying that Mongolia could just as easily lay claim to large swaths of Russian territory.

He also carved out a neutral stance on the war in the Donbas. In a clear reference to Ukraine, Lukashenka claimed he would never allow Belarusian territory to be used to attack another state, and made clear that Belarus is not interested in being part of Putin’s so-called “Russian World.”

On the sidelines of the February 2015 peace talks in Minsk, a live microphone picked up a conversation between Lukashenka and the then Ukrainian President Petro Poroshenko, who were talking about Putin. “He’s playing a dishonest and dirty game,” Poroshenko said of the Kremlin leader. Lukashenka nodded sympathetically, replying, “I know, I know. Everybody realizes this.”

Bilateral relations were so warm at around this time that when the Ukrainian and Belarusian national soccer teams played each other in Lviv in September 2015, their fans marched out together under banners reading “For Your Freedom And Ours” and “A Brotherhood Of Conscience.” They also belted out chants deriding Putin and gave blood together for wounded Ukrainian soldiers.

All of this, of course, changed after the deeply flawed Belarusian presidential election in August 2020. The rigged vote sparked unprecedented nationwide anti-regime protests. Lukashenka responded with a brutal and ongoing crackdown on dissent that has left him internationally isolated and increasingly dependent on Putin.

Lukashenka’s recent efforts to demonstrate his over-the-top loyalty to Putin regarding Ukraine also comes with a whiff of desperation. The personal relationship between Putin and Lukashenka has been famously rocky, and the Kremlin leader would clearly like to replace the Belarusian dictator with a more pliant and less troublesome client.

In addition to steadily increasing its economic, political, and military footprint in Belarus since August 2020, Putin has also been pressing Lukashenka to amend the Belarusian Constitution to increase the authority of the country’s parliament at the expense of the presidency.

Russia has been actively putting the pieces in place to make sure Moscow is in a position to control the newly empowered post-Lukashenka legislature through pro-Russian parties in anticipation of the Kremlin’s desired changes to the Belarusian Constitution.

Lukashenka clearly sees the writing on the wall and appears to be trying to salvage his political life by auditioning for the role of the junior partner in the axis of autocrats that is taking shape in Eastern Europe. This is an alarming development for Ukraine in particular and poses a significant security threat to the wider region.