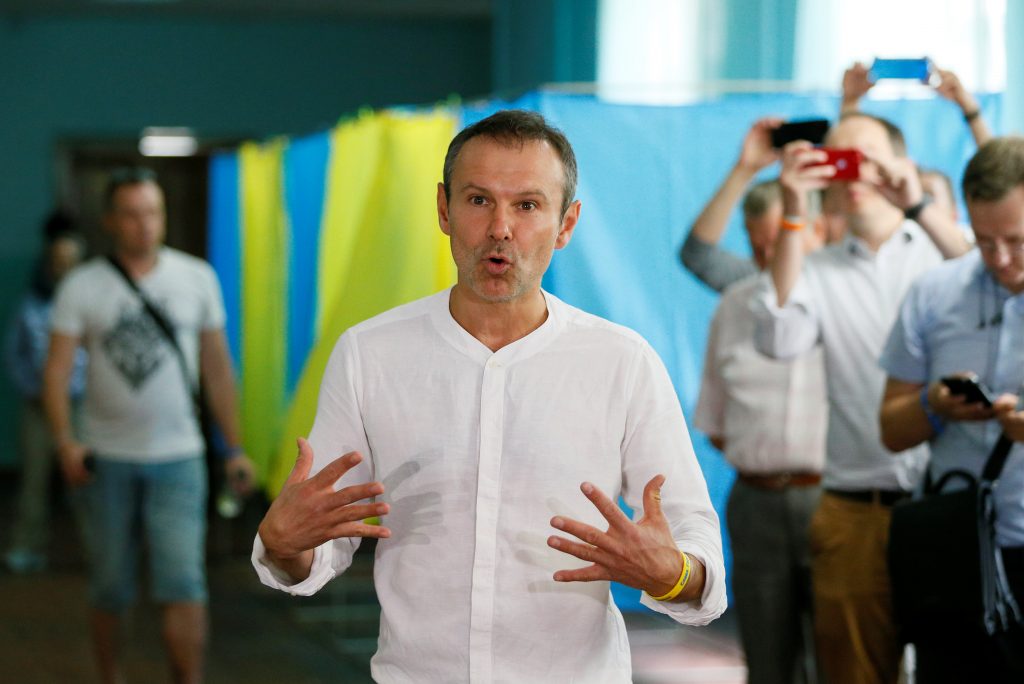 Ukrainian rock legend turned politician Slava Vakarchuk speaks with journalists at a polling station during Ukraine's July 21, 2019 parliamentary election. Less than one year later, he has stepped down as an MP. Vakarchuk claims it's a case of "mission accomplished", but will his party survive without him? REUTERS/Gleb Garanich

Slava Vakarchuk, Ukraine’s most famous rock star and also one of the country’s most high-profile members of parliament, unexpectedly called it quits on June 11.

Speaking at a press conference outside parliament in Kyiv, Vakarchuk declared his “mission accomplished” and announced that he would be stepping down as an MP. He had achieved his objective of injecting new blood into Ukraine’s infamously clubby and corrupt legislature, he explained. Vakarchuk now plans to put his energy into a large but unspecified educational project.

For much of 2018 and early 2019, the 44-year-old musician had flirted with the idea of entering the political fray. Tipped as a potential presidential candidate, Vakarchuk almost ran for Ukraine’s top job and then waffled. Instead, fellow entertainment industry heavyweight Volodymyr Zelenskyy won the Ukrainian presidency by a landslide. In May 2019, Vakarchuk finally took the plunge and launched the only non-oligarchic party in Ukraine’s parliament, Holos (Voice), which went on to win 20 of 423 seats in the July 2019 parliamentary elections.

Since then, Vakarchuk’s Holos party has shot down a number of bad proposals, consistently made noise about corruption, championed a hard line in Ukraine’s occupied east, insisting that the country hold firm and not give in to Moscow’s entreaties, and been the party most closely aligned with the values of the Euromaidan, the street protests that drove the former pro-Russian president out of power in 2014.

Vakarchuk’s announcement caught many people off-guard, including some within his own party. Insiders told me that they only learned of his decision a few hours before the press conference. Others were concerned that Slava had dropped his team just months before Ukraine’s October 2020 local elections, undermining the party’s chances of reaching the obligatory five percent threshold.

Others welcomed the decision, praising Vakarchuk’s authenticity and integrity.

“[Holos’s] deputies were never caught taking bribes, selling positions, or bypassing the law and rules to get things done. They made a lot of political mistakes. A lot. The entire time. I have a million objections to them. But they should try to continue to prove themselves. I know many of the party members. I do not respect all of them. I’m not happy about all of them. But then I look at the others,” Vitaliy Deynega, the former CEO and founder of the Come Back Alive Foundation, wrote on Facebook.

I spent much of 2018 following and baiting Vakarckuk to run for president. At the time, most reform-minded people thought he was the best candidate for the job, and he probably was. Well educated and widely respected for his prominent roles in Ukraine’s two post-Soviet people power revolutions, Vakarchuk was also popular among voters. In some polls, he beat Zelenskyy. But it was obvious that he didn’t have the stomach for Ukraine’s filthy politics. Even my little columns managed to ruffle him.

It would be all too easy (and predictable) to now say I told you so. After all, Vakarchuk served in parliament before and it didn’t last very long on that occasion either. Elected in late 2007, he renounced his seat in September 2008. He reportedly found the job tedious.

When I last saw him in February 2020 during his second stint in parliament, he said he didn’t like the role. However, he seemed determined and carried himself with a seriousness of purpose that I hadn’t observed before. One diplomat told me that Vakarchuk was becoming a statesman. It didn’t last.

All of this is petty and beside the point. Vakarchuk will be attacked for quitting parliament less than a year after being elected, but he may already have achieved something that no one else in Ukraine has. He may have created the first real political party based on ideology, not personality, and one without a direct financial relationship to Ukraine’s oligarchs. If Holos can carry on without Vakarchuk’s name on the ticket, he will have succeeded in more than one ruthlessly competitive sphere of life, which is far more than most of us can say about ourselves.