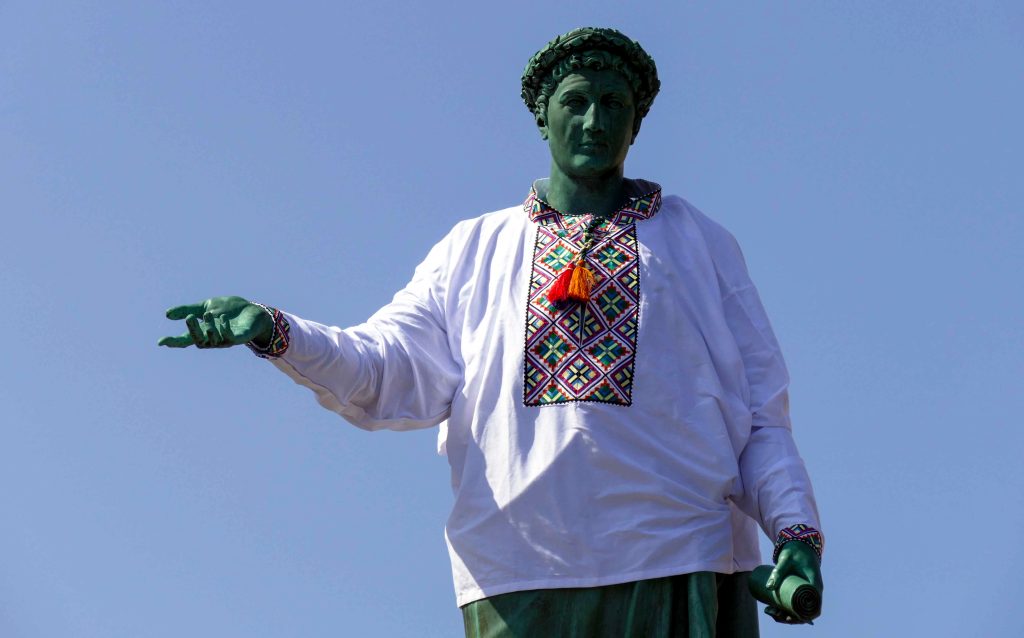 Visitors stepping through the gates of Odesa’s outdoor Green Theater are immediately greeted by bright cartoon cutouts of a joyful purple flower, a man in overalls writing with a giant pencil, and the face of a heavy white cat. Startling at first blush, the paint-on-metal images are part of a new installation from a local contemporary artist, the Theater’s director Sergey Rovinskyy explains. Take a closer look, and the exhibit’s images are fastened directly on top of a Soviet-era inscription praising the glories of communism.

The juxtaposition is entirely intentional. “We didn’t want this awful old Soviet art anymore. We wanted to create something new,” Rovinskyy declares. Replacing the tired touchstones of Soviet institutions with modern Ukrainian references is central to the brilliant Green Theater and emblematic of Odesa’s enduring status as a vibrant cultural force in the national life of modern Ukraine.

The Green Theater first opened in 1936 as a large amphitheater in central Odesa surrounded by tall trees within the city’s sprawling Taras Shevchenko Park. The Soviet version of the theater was a cultural phenomenon in its own right, even hosting American clarinetist Benny Goodman, “The King of Swing,” in 1962.

Concerts continued through the 1990s until the theater was privatized in 2001. A series of plans to develop the site failed to materialize and the theater slowly fell into disrepair. By the time local businessman Yegor Grebennikov acquired the land in 2015, the Theater was a wasteland of cracked concrete, broken glass, and rubble.

But Grebennikov and his business accelerator Impact Hub Odessa saw potential in the site. Grebennikov, Rovinskyy, and their team of volunteers quickly resurrected the bedraggled ruins of the Green Theater and transformed the site into a living, breathing urban green space clustered around the remodeled amphitheater. Their efforts have married sustainability, social entrepreneurship, and public art to produce a world-class cultural venue.

Today, Green Theater hosts concerts, film screenings, lectures, and more in its 2,000-person capacity event space. Above the now-gleaming white and wood amphitheater is a fine gravel path that rings around the theater itself. The wide, tree-lined circle boasts a hip thrift store, an outdoor co-working space, a community garden, a buzzing outdoor coffee shop, and a pebble-encircled meditation area, with pieces of abstract sculpture art on display throughout. The vibe is quintessentially European, like a meticulously planned Scandinavian summer park.

Odesa has long been Ukraine’s window to the West thanks in large part to the maritime traffic at its deep-water port, which serves as Ukraine’s largest trade hub and main international gateway. The sorbet-colored facades of the ornately trimmed buildings in the city center reveal centuries of European influence. Monuments to Alexander Pushkin and Isaac Babel mark Odesa’s impressive literary pedigree.

Even in Soviet times, the city was a hotbed for new forms of expression. Led by artists like the abstractionist painter Oleg Sokolov, Soviet Odesa became an important locus of artistic resistance to the dominant Socialist Realism of the time.

That rich tradition of unique cultural expression continues in today’s Odesa. Far from the often-frenetic political energy of Kyiv, Odesa hums along at an agreeable simmer. The city is driven by generations of artists, writers, and intellectuals who are passionate about their work and steadfast in preserving the city’s open atmosphere.

More than one hundred years after its founding, the understated Odessa Museum of Modern Art still showcases some of the top contemporary works in Ukraine. Meanwhile, philanthropist Vadim Morokhovsky and art dealer Marat Gelman have turned an old champagne factory in the city’s Maly Fontan district into a buzzy new artist house. And lifelong Odessan painter Igor Gusev has won the unofficial title of Ukraine’s “brightest and most interesting painter” for his modern takes on classical scenes.

This embarrassment of cultural riches is even more impressive considering the talent that has left the city. “Some of Odesa’s best artists have moved north to Kyiv or emigrated, but many still remain, engaged in public art,” says Vladislav Davidzon, former chief editor of the Odessa Review.

Sadly, the city lost one of its leading artists in August 2021. “The death of Ukrainian New Wave painter Oleksandr Rojtburd was a significant blow to the local arts scene,” laments Davidzon. “But his capable staff and deputies [at the Odesa Art Museum] will carry on his legacy.”

Each year, the Odesa International Film Festival (OIFF) attracts some of the most exciting newcomers in Ukrainian and European cinema. It, too, has become an incubator through which artists share different aspects of Ukrainian culture with the wider world. Kateryna Hornostay’s “Stop-Zemlia” won best picture in 2021 for its restrained yet piercing examination of youth culture in today’s Ukraine.

Importantly, Odesa’s creative scene has a markedly more assured outlook these days. The OIFF is in its twelfth year and has become a regular stop on the festival circuit for European film professionals. In July 2021, Grebennikov bought out the Green Theater and signed a 32-year lease with the city for the surrounding land. That staying power provides new opportunities in and of itself. “There were times when we didn’t know who we were leasing [our land] from,” Theater director Rovinskyy recalls with a chuckle. “Now we have some stability, and we can start planning years into the future.”

For Rovinskyy, this future vision may one day extend well beyond the Green Theater. He and his team lead grassroots efforts to save cultural sites from demolition around Odesa, and have plans for a sustainable cleanup of the polluted southern reaches of the city. With local government unwilling to take the lead, social impact initiatives are well-placed to shape the physical and cultural character of the city.

Could other Ukrainian cities develop their own versions of the Green Theater initiative? Rovinskyy quickly nods his head and replies matter-of-factly, “yes, this could certainly happen elsewhere.” He points to the dozens of derelict sports stadiums throughout the country that could become cultural hubs with the right vision and investment. Today, perhaps only Urban Space 100 in western Ukraine’s Ivano-Frankivsk compares as a similarly impressive civil society project.

Whatever happens in the years ahead, this most cosmopolitan of cities will remain one of Ukraine’s cultural crown jewels. Odesa’s rich heritage, combined with the almost limitless creative ambition of its residents, make it the perfect incubator for art and social entrepreneurship in independent Ukraine.

Could Snake Island be the next hot spot in Vladimir Putin’s Ukraine war?

Vladimir Putin’s hybrid war against Ukraine is now in its eighth year and shows no signs of ending. Many expect the next escalation to come in the Black Sea, with Ukraine’s Snake Island a potentially attractive target.