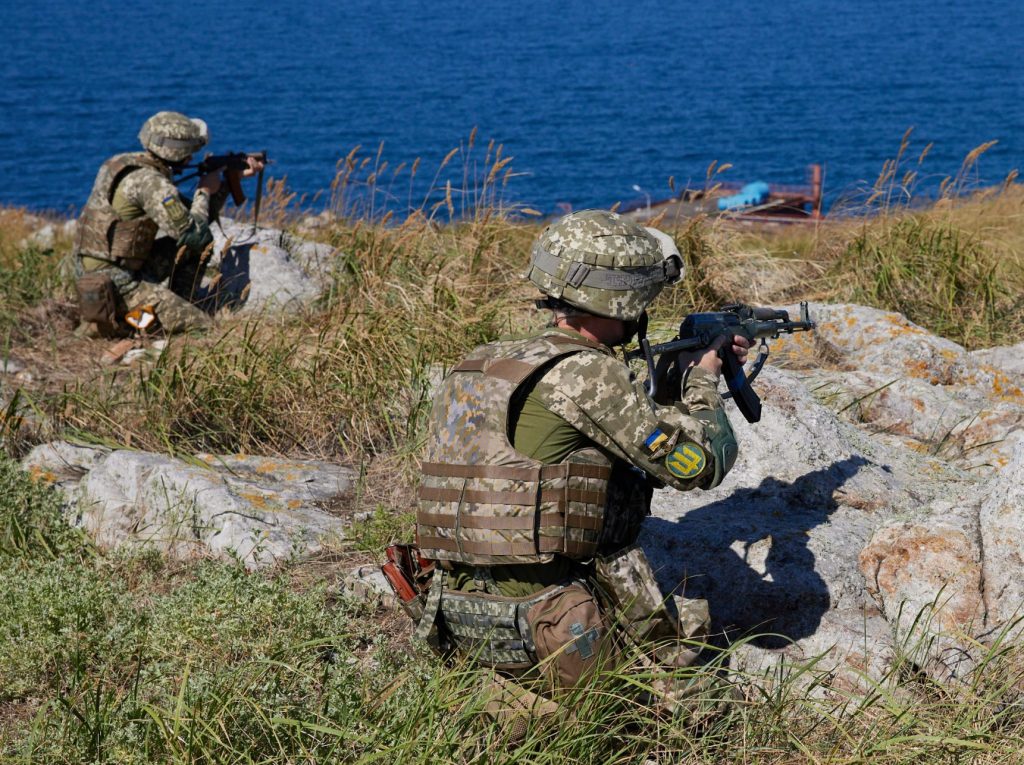 When Vladimir Putin massed Russian forces along the Ukrainian border in spring 2021, the world held its breath in anticipation of a possible new Kremlin offensive in Moscow’s simmering seven-year war against Ukraine. While military observers continue to monitor the land border between the two countries for signs of a gathering invasion force, the next major Russian escalation may actually take place at sea.

Snake Island, or Zmiyiniy Ostriv in Ukrainian, is one potential hot spot. This tiny landmass in the Black Sea lies about 30 miles off the coast of Vylkove, the nearest Ukrainian town, and around 185 miles west of Crimea. It boasts a lighthouse, about a hundred Ukrainian soldiers, and some sheep. The total land area of Snake Island is less than one-tenth of a square mile, but its location in Ukraine’s corner of the Black Sea makes it a tempting prize in an increasingly militarized maritime region.

The Russian seizure of Crimea in 2014 has already allowed Moscow to dominate large swathes of the Black Sea that rightfully belong to Ukraine. Until it regains Crimea, Snake Island will remain key to Ukraine’s maritime territorial claims. Recent developments indicate that Ukraine is well aware of Snake Island’s strategic importance, as well as the island’s extreme vulnerability to Russian attack.

In the lead-up to the recent Crimea Platform summit in Kyiv, Ukrainian President Volodymyr Zelenskyy chose Snake Island as the location for a free-ranging interview with Ukrainian media to spotlight the summit. Asked why he chose the location, Zelenskyy answered that the selection of Snake Island for the press event was highly symbolic. “This island, like the rest of our territory, is Ukrainian land, and we will defend it with all our might.”

In recent years, the Russian Black Sea Fleet has sought to chip away at Ukraine’s maritime territory in the Black Sea as a whole, and in the Azov Sea to Crimea’s east. Kremlin efforts to seize control of Ukraine’s internationally recognized territorial waters have already provoked a number of incidents that have grabbed international attention. One of the most recent confrontations took place in June 2021, when Britain’s HMS Defender sailed through Crimean waters in a show of non-recognition of Russian claims, eliciting a bizarre military and propaganda response from Moscow.

Meanwhile, since the opening of the Crimean Bridge in spring 2018, increasing Russian interference in Azov Sea shipping has severely restricted access to Ukrainian port cities Berdyansk and Mariupol, dealing a major blow to eastern Ukraine’s maritime traffic. Some experts fear Russia may now be planning a similar approach west of Crimea in order to cut Ukraine off from the Black Sea entirely.

This scenario would represent a dramatic escalation in Putin’s campaign against Ukraine. However, given the lack of robust international reaction to Russia’s hybrid blockade of the nearby Azov Sea, such a move cannot be ruled out. Snake Island would likely have a crucial role to play in any such naval blockade. If Putin succeeded in seizing Snake Island, Russian forces would be in a strong position to cut off all maritime access to Ukraine and tighten their grip over the northern half of the Black Sea.

Control of Snake Island currently enables Ukraine to claim territorial waters that extend 12 nautical miles in all directions from the island, which helps safeguard the Black Sea shipping corridor to major Ukrainian port cities Odesa, Mykolaiv, and Kherson. This Black Sea access is crucial to Ukraine’s grain and metals exports, as well as consumer goods imports from China. Without a viable shipping lane to global markets, the Ukrainian economy would rapidly plunge into crisis.

Zelenskyy appears to recognize the danger of a Russian maritime escalation. During his recent interview on Snake Island, the Ukrainian leader declared, “We know about Russia’s interests [in the Black Sea]. We see what plans they have for the joint Russian-Belarusian exercises in September 2021. We are ready for the various steps they might take.”

Ukraine is already adopting a number of measures to bolster Snake Island’s defenses. The island was involved in a range of exercises during NATO’s annual Sea Breeze exercises in June and July 2021. Local sources also report that the Ukrainian military presence on the island has almost doubled since the exercises. Zelenskyy killed two birds with one stone during his August 9 media trip, using the occasion both to announce new leadership of the Ukrainian Armed Forces and observe exercises demonstrating how Ukrainian troops would repulse an attempted invasion of the island. The Ukrainian government is giving every indication that the world needs to take this nearly invisible blip in the Black Sea seriously.

While the national security leadership in Kyiv should be commended for taking action to counter the Russian threat to Snake Island, Ukraine is also in urgent need of greater international backing in the Black Sea. Russia remains by far the dominant military force in the Black Sea region and few experts would currently question Moscow’s ability to seize Snake Island if it chooses to do so.

This represents an opportunity for US President Joe Biden, who is set to meet with Zelenskyy in Washington on September 1. The Biden administration has come in for fierce criticism for its short-sighted approach to the Russian Nord Stream 2 pipeline, both domestically in the US and from many in Ukraine.

Bolstering Ukraine’s maritime security would provide a timely boost for the US-Ukraine relationship. It would also be an easy win for the Biden team at a time when its foreign policy decisions have come under major scrutiny following the Afghanistan debacle, and aligns perfectly with the “unwavering support for Ukraine’s sovereignty and territorial integrity” that Biden promised Zelenskyy during their first phone call back in April. When Zelenskyy and Biden meet face-to-face, the Ukrainian president needs to make this issue an explicit ask of his American counterpart.

The US can reassert its global leadership by increasing its maritime security assistance to Ukraine. A revamped weapons system package from the US would help Ukraine’s military maintain freedom of navigation in Ukrainian and international waters. It is also worth bulking up the US Navy’s presence on the Black Sea, conducting the same freedom of navigation operations it conducts in waters contested by China.

Above all, if the Kremlin escalates Black Sea security tensions in the months ahead, the US needs to respond more forcefully than it did earlier this year when it dispatched and then recalled navy vessels in favor of a lightly armed coast guard ship in what was widely seen as a disappointing flip-flop of force projection.

The Black Sea is heating up. All signs point to it being the next major theater in Moscow’s hybrid war against Ukraine. Fortunately, the US and Ukraine have an opportunity to be ahead of the curve through proactive measures rather than reactive half-steps. A good place to start would be by implementing comprehensive measures to defend Snake Island.

Andrew D’Anieri and Doug Klain are program assistants at the Atlantic Council’s Eurasia Center. Find them on Twitter @andrew_danieri and @DougKlain.