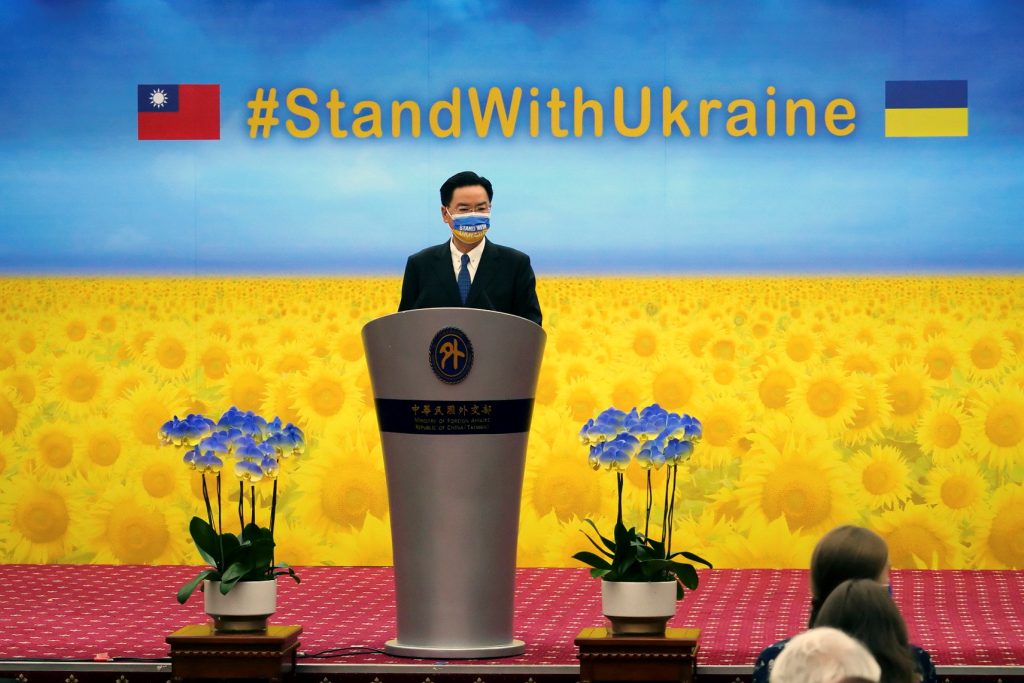 The unintended consequences of Vladimir Putin’s disastrous war in Ukraine will be studied for years to come, with ongoing geopolitical repercussions already evident from North America to East Asia. Russia’s rapidly unraveling invasion has served as a warning to Putin’s ally, Chinese leader Xi Jinping, as he mulls a possible attempt to retake Taiwan.

Meanwhile, Taiwan is pursuing an ambitious global charm offensive to shore up its international relationships, including efforts to enhance bilateral ties with Ukraine. The Ukrainian government now has an opportunity to broaden and deepen the strategic relationship between these two embattled democracies.

Prior to Russia’s February 2022 offensive, Taiwan had almost zero visibility inside Ukraine. Its trade office presence in Kyiv was both intentionally minimized by Taipei and largely ignored by the Ukrainian authorities, who remained cautious about antagonizing China while welcoming strong Chinese trade links as a counterweight to Russia. Indeed, in the years prior to Putin’s full-scale invasion, China had emerged as Ukraine’s largest trade partner and a key market for Ukrainian exports.

The events of the past eight months have transformed the geopolitical climate, with Russia’s invasion also altering the dynamics of bilateral ties between Taipei and Kyiv. Given Xi Jinping’s open support for the Kremlin, the prospect of Ukraine resuming its earlier relationship with China is increasingly impractical, making the possibility of stronger economic and diplomatic ties with Taiwan potentially more attractive.

Taiwan is currently playing a quiet but steady role in Ukraine, including support for rebuilding civilian infrastructure in cities like Kharkiv. Ukraine’s parliament has responded to these overtures with steps of its own to enhance ties with Taiwan, including a newly-formed multi-party group within parliament to promote “closer friendship, trade, and cultural ties.” The Ukrainian government could soon look to extend cooperation into practical areas where both countries can trade best practices and complement each other’s experience of resisting authoritarian aggression.

Closer ties with Taiwan could potentially bolster Ukraine’s efforts to pursue a competitive and diverse market for its goods, a requirement of the country’s association agreement with the EU. The European Parliament has been vocal in its support for enhanced economic relations between Ukraine and Taiwan. Advancements in this area would not only offer Ukraine economic benefits, but could also smooth the path toward further EU integration.

The e-governance and information space offers obvious opportunities for closer cooperation. Ukraine’s ability to maintain the functions of government at all levels since the full-scale Russian invasion began on February 24 is an area worthy of greater international study, particularly in terms of how Ukraine’s decentralized approach to local government has empowered city officials to be proactive in communications, planning, and coordination with citizens. The country’s postal service, tax revenue collection, online banking payments, and e-government services on Ukraine’s Diya app have all functioned smoothly despite the enormous challenges posed by Russia’s invasion.

The Ukrainian government’s masterly use of social media and other communications channels to not only convey important information and build morale inside Ukraine but also effectively communicate to the international community is of enormous interest to Taiwan. Plans are already being developed by Ukraine’s Ministry of Digital Transformation to send a delegation of Ukrainian MPs to Taipei later this year. Similar initiatives would likely be welcomed and met with considerable interest.

Meetings between Ukrainian and Taiwanese representatives within the framework of larger EU gatherings to discuss the lessons already learned from Ukraine’s wartime experience would be beneficial for European and Taiwanese partners. Such gatherings would also provide an EU backdrop that could help Ukraine assess the challenges that European states and their municipalities currently face from Chinese influence.

Taiwan’s readiness to assist Ukrainian cities in addressing the damage wrought by Russia’s war and Taipei’s direct outreach to Ukrainian mayors during summer 2022 are strong arguments for a seat at the table in designing a post-war support package for Ukraine. Taiwanese involvement in reconstruction planning and the strategic rebuilding of Ukrainian cities could bring greater innovation and lead to expanded trade opportunities.

Ukraine could additionally benefit from Taiwan’s technological know-how, investment, innovation, and access to new markets in Asia. At the same time, strengthening public and diplomatic relations would potentially help both countries in their shared strategic goal of resisting authoritarian aggression.

As Ukraine moves closer to what would be an historic victory over Russia, the country will face a whole range of fresh challenges such as maintaining international interest in the post-war reconstruction process. There will also be new opportunities for Ukraine to assume an enhanced role among the world’s democracies. A fully-fledged partnership with Taiwan could deliver a range of important benefits to Ukraine as it begins this next chapter.