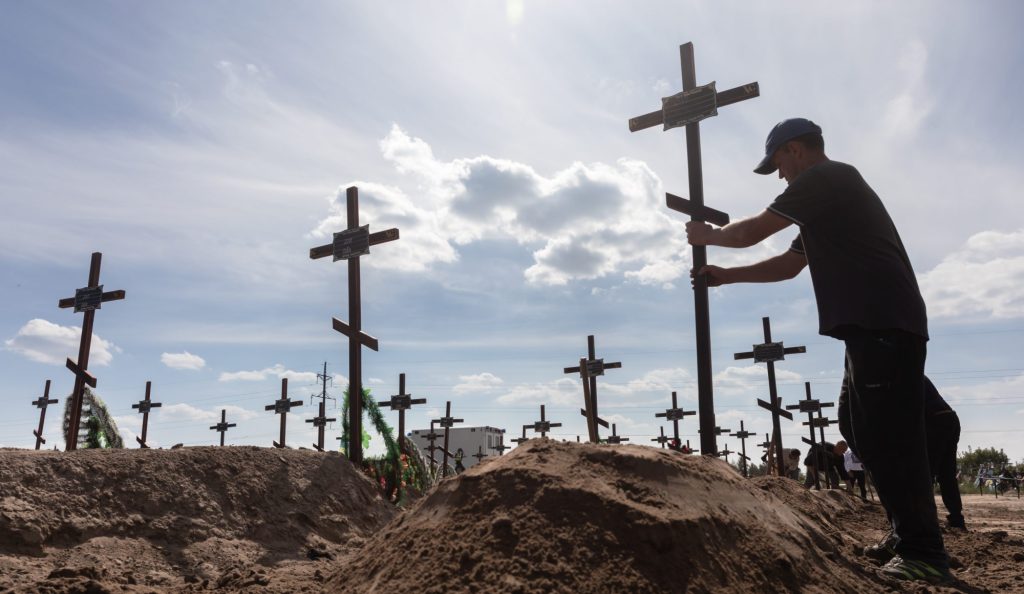 Ever since Vladimir Putin’s troops first crossed the Ukrainian border on February 24, there has been no shortage of Western commentators seeking to explain why Ukraine really has no choice but to offer Russia land in exchange for peace. Despite a series of Ukrainian military successes and mounting evidence that the Russian invasion has run out of steam, calls for a compromise peace continue.

The self-styled foreign policy realists behind these calls tend to overlook the fact that the land they are so eager to give away is actually home to millions of Ukrainians who would face a desperately bleak future under Russia’s genocidal occupation. Such arguments reflect a fundamental failure to grasp the unrepentant imperialism at the heart of modern Russian identity and the genocidal objectives underpinning the invasion of Ukraine.

Many in the realist camp remain convinced that the roots of the current conflict lie in NATO enlargement and Western encroachment into Russia’s traditional sphere of influence. They typically approach today’s war as a wholly rational geopolitical dispute and insist that Putin’s actions, however brutal, are a more or less inevitable response to the West’s own provocative policies in the decades following the Soviet collapse.

This Kremlin-friendly narrative has never really stood up to serious scrutiny. After all, even the most rabid of Russian propagandists recognizes that the entire notion of a NATO attack on Russia is pure fantasy. Even if NATO did genuinely harbor plans to invade Russia, why would they not simply use the Baltic states, which offer the same geographical proximity as Ukraine and have been members of the alliance for almost two decades?

The events of the past six months have further undermined the credibility of Moscow’s NATO mythology. Senior Kremlin officials now freely acknowledge that the current Russian invasion would continue even if Ukraine were to rule out NATO membership altogether and officially embrace neutrality, as Ukrainian President Volodymyr Zelenskyy has suggested.

Meanwhile, Russia has accepted neighboring Finland’s recent decision to join NATO with barely a murmur. This meek response to the fast-tracked Finnish membership bid has made a complete mockery of the Kremlin’s earlier protestations over the unacceptability of a growing NATO presence on Russia’s borders.

In reality, of course, Putin understands perfectly well that NATO poses no security threat to Russia. He has simply used the issue to his advantage. The Russian dictator has exploited lingering Western divisions over the wisdom of the alliance’s post-1991 enlargement as a convenient way of disguising and legitimizing his own historic mission to destroy independent Ukraine.

Putin is the latest in a long line of Russian rulers who have sought to eradicate Ukrainian identity and wipe Ukraine off the European map. This dark history provides essential context for anyone wishing to make sense of today’s war. Indeed, the current invasion is the latest link in an unbroken chain of imperial oppression stretching back for more than three hundred years.

For centuries, successive Russian regimes ruthlessly suppressed Ukraine’s independence aspirations while imposing wave upon wave of russification. Generations of Ukrainians were robbed of their past and banned from using their own language. The nadir was reached in the earlier 1930s when millions were starved to death in a genocidal famine engineered by Soviet dictator Josef Stalin to eradicate Ukrainian national identity in its rural heartlands.

While Ukraine officially achieved independence in 1991, Russia never came to terms with this separation. Instead, Moscow sought to keep independent Ukraine firmly within the Kremlin orbit and viewed Ukrainian efforts to embrace a democratic European future as an existential threat to authoritarian Russia that must be prevented at almost any cost.

Throughout his reign, the need to either control or crush Ukraine has dominated Vladimir Putin’s foreign policy thinking. His pivot from early cooperation with the West to Cold War-style confrontation came about as a direct response to Ukraine’s 2004 Orange Revolution. Ten years later when millions of Ukrainians took to the streets once again in defense of their European choice and fledgling democracy, Putin went one step further and ordered his military to intervene. The 2014 seizure of Crimea and occupation of eastern Ukraine set the stage for this year’s full-scale invasion and illustrated Putin’s readiness to make remarkable sacrifices in order to resolve the Ukrainian question.

While advocates of appeasement may well be genuinely unaware of Russia’s true intentions, Ukrainians are under no such illusions. They are painfully familiar with Russia’s deeply entrenched culture of denial regarding their country’s right to exist. They also noted how Russian rhetoric toward Ukraine grew increasingly radical in the months leading up to the invasion. Putin himself published an unhinged 5,000-word historical essay in July 2021 that many likened to a declaration of war on Ukrainian statehood.

As the outbreak of hostilities drew closer, Putin’s obsession with the destruction of Ukraine became increasingly obvious. He proclaimed Ukraine an inalienable part of Russia’s own history, culture, and spiritual space, while at the same time denouncing the present Ukrainian state as an illegitimate “anti-Russia” that could no longer be tolerated.

During the first six months of the invasion, Russia’s genocidal intentions have become even more explicit. Regime officials have routinely questioned Ukraine’s continued existence, while debates over the desirability of genocide in Ukraine has become an everyday feature of Kremlin-controlled Russian TV. Meanwhile, state media has helpfully clarified that Putin’s promised “de-Nazification” actually means the “de-Ukrainianization” of Ukraine.

These chilling words have been more than matched by deeds. The advancing Russian army has employed massive artillery bombardments to destroy entire Ukrainian towns and cities along with their civilian populations. Tens of thousands are believed to have been killed in Mariupol alone as Russian forces methodically destroyed the Ukrainian seaside city.

In regions under Russian occupation, Putin’s troops have systematically engaged in mass murder. Groups of victims have repeatedly been found in liberated areas with hands bound and showing signs of torture. Millions of Ukrainian civilians have been forcibly deported to Russia, including thousands of children. Those left behind are subject to terror tactics including abductions and hostage-taking. The Ukrainian language has been removed from every aspect of public life, while parents who refuse to subject their children to Russian indoctrination have been warned that they risk losing custody.

Given openness of Russia’s plans to extinguish the Ukrainian nation, it is hardly surprising that an overwhelming majority of Ukrainians firmly oppose any kind of land-for-peace deal with the Kremlin. They recognize that a negotiated settlement which cedes parts of Ukraine to Russian control would condemn the residents of those regions to genocide while paving the way for the next Russian invasion once Putin’s battered military regroups and rearms. Rather than accepting this dismal fate, there is a determination to continue fighting until a decisive victory can be secured. Faced with the destruction of their nation, most Ukrainians believe they have no other choice.

Media portrayals of the war in Ukraine often depict it as a struggle between Russia and the West but this geopolitical framing is misleading. What we are currently witnessing is actually the latest chapter in Europe’s longest independence struggle. As long ago as 1731, French thinker Voltaire was moved to write, “Ukraine has always aspired to be free.” This epic journey may now be entering its final stages.

Thanks to the remarkable courage and resilience demonstrated over the past six months, the Ukrainian nation is currently closer to securing true freedom than at any time in its long and troubled history. It is vital that the democratic world now remains united behind Ukraine as the war enters what is likely to be a decisive period. There should be no more talk of concessions or compromises. Partial genocide is not an option. Instead, the only way to achieve a lasting peace is by helping Ukraine to win the war.

Image: A man seen placing a cross on a grave during burial of the remains of 13 unidentified and two identified people who were killed in Bucha during the Russian occupation. September 2, 2022. (Photo by Mykhaylo Palinchak / SOPA Images/Sipa USA)