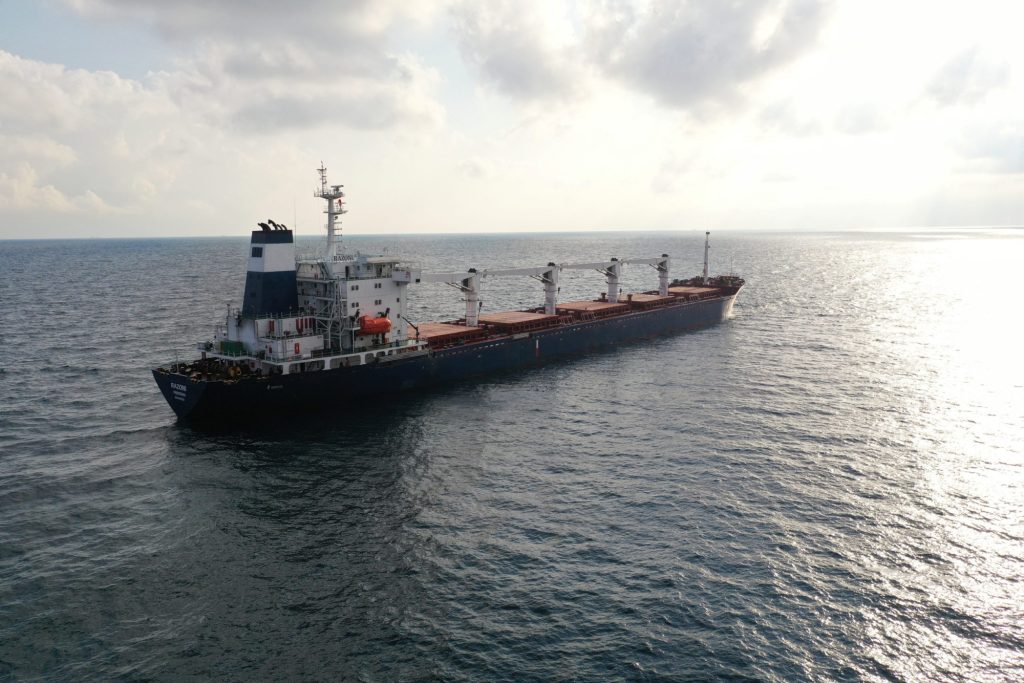 This week saw the first cargo ship sail from Odesa across the Black Sea following the July 22 signing of a landmark deal to allow the export of Ukrainian grain. This agreement, jointly brokered by Turkey and the United Nations and signed by Russia and Ukraine, aims to end a five-month Russian blockade of Ukraine’s Black Sea ports that has brought the world to the brink of a global food crisis.

While the departure of Ukraine’s first grain shipment since February is good news, it is still far too early to celebrate. Crucially, the Kremlin’s record of disregard for treaty commitments and international law during its war in Ukraine raises grave doubts over Russia’s reliability as a partner in the grain deal.

The Kremlin’s lack of credibility has already been underlined. Just hours after the agreement was signed in Istanbul, Russian forces launched a missile attack on Odesa Port which Moscow initially denied but later acknowledged. Similar attacks on port facilities or merchant shipping would come as no surprise and would quickly render the fragile grain agreement unworkable. In light of these concerns, further steps are clearly needed in order to guarantee global food security and put a stop to Vladimir Putin’s Black Sea blackmail.

The role played by Ukrainian agricultural produce in international food security should not be underestimated. Long known as the breadbasket of Europe, Ukraine has in recent years become a global garden. On the eve of the Russian invasion, it was estimated that Ukraine was providing food for as many as 400 million people around the world. Ukrainian officials stated in early 2022 that this figure would rise to a billion by 2030, representing around one in nine people on the planet.

The resumption of Ukrainian agri-food shipments is no less important for Ukraine itself. Agriculture is the engine of the Ukrainian economy representing over 40% of the country’s total exports. The bulk of Ukraine’s agricultural riches reaches global markets via the country’s Black Sea ports. Given this reliance on the farming industry, Russia’s Black Sea blockade has proved economically devastating and has contributed to a collapse in Ukrainian GDP.

The effectiveness of Russia’s blockade and its importance in Moscow’s wider campaign to extinguish Ukrainian statehood makes it unlikely that Putin will be prepared to abandon this strategy altogether. Instead, many observers remain cautious and anticipate that Russia will engineer reasons to disrupt the current grain deal. While grain ships may continue to leave Odesa, the most likely scenario would involve limited export volumes that will reduce the diplomatic pressure on Moscow without easing Ukraine’s economic woes or solving global food shortages.

Putin certainly has no qualms about weaponizing global hunger in his war against Ukraine. While Moscow officially seeks to blame Ukraine and the collective West for food shortages and rising commodities prices, senior regime representatives have openly discussed Kremlin plans to starve the world into submission. Speaking at the high-profile Saint Petersburg International Economic forum in June, the Chief Editor of Kremlin media platform RT, Margarita Simonyan, declared, “All our hope is in famine.”

If the international community wishes to secure Ukrainian agricultural exports, it cannot rely on Russia’s word alone. While the current grain deal is a step in the right direction, Russia retains military control over Black Sea maritime routes and can still unilaterally end export shipments from Odesa and other Ukrainian ports.

While diplomatic dialogue with the Kremlin has helped achieve the recent breakthrough, the only language Putin truly understands is the language of strength. Indeed, it is no coincidence that the grain agreement signed in late July came following a series of significant military setbacks suffered by Russia in the Black Sea zone of the Russo-Ukrainian War.

When the Russian invasion began on February 24, the Black Sea blockade was already in place under the guise of naval exercises. Putin sought to supplement this naval blockade by invading southern Ukraine from Crimea and seizing Odesa. The ultimate goal was the occupation of Ukraine’s entire Black Sea coastline. However, things did not go according to plan. During the first weeks of the invasion, Putin’s troops ran into unexpectedly tough opposition and were forced to retreat from Mykolaiv, a key city in southern Ukraine which was to serve as the gateway for Russia’s Odesa offensive.

In April, plans for an amphibious assault on Odesa were dealt a crushing blow when Ukraine sank Russia’s Black Sea Fleet flagship, the Moskva. Russian forces suffered a further Black Sea setback in early July when they abandoned the strategically vital Snake Island after suffering days of Ukrainian bombardment. Embarrassed Kremlin officials attempted to spare Putin’s blushes by rebranding the retreat as a “goodwill gesture.”

These defeats on land and sea helped persuade Putin to sign the new grain deal and relax his blockade. Further strong measures are now needed in order to make sure Ukraine’s ports remain open and secure the sea lanes that serve as vital arteries for global food security.

From a military perspective, the best way to safeguard Ukrainian grain shipments would be to form an international naval coalition that would take on the task of policing maritime routes across the Black Sea. However, this would create significant risk of direct military confrontation between participating countries and the Russian navy. Past experience indicates that Western leaders have no appetite for such risks.

One creative option would be to place Odesa under United Nations control as a neutral port. This could be justified based on the key role Odesa plays in global grain exports. UN officials would oversee port operations and provide assurances that ships were not delivering weapons to Ukraine, but the problem of safeguarding merchant shipping would remain along the challenges of avoiding potential clashes with Russian warships.

Arming Ukraine remains by far the most practical and realistic solution. Providing the country with enhanced anti-ship and anti-submarine capabilities would dramatically change the balance of power in the northern Black Sea zone. The Ukrainian military has already demonstrated its ability to sink Russian warships and has forced the Russian navy to retreat from the country’s southern shores. Indeed, Ukrainian officials boasted recently that the Russian Black Sea Fleet had cancelled this year’s Navy Day celebrations in late July rather than risk exposing itself to Ukrainian attack.

If Russia is made aware that further attempts to blackmail the world will result in the destruction of the country’s Black Sea Fleet, there is every reason to believe that Putin will back down. Like all bullies, the Russian dictator is a coward at heart who withdraws whenever he encounters resolute opposition. Ukraine is ready to demonstrate this resolve but must receive the tools to do so.

Russia’s five-month Black Sea blockade has underlined the crucial contribution of Ukrainian agricultural exports to the fight against world hunger. Diplomatic deals to resume Ukrainian grain shipments are welcome but can hardly be regarded as reliable when one of the signatories is Russia. Instead, the international community must seek more credible ways of safeguarding global food security. That means arming Ukraine to keep vital sea lanes open.