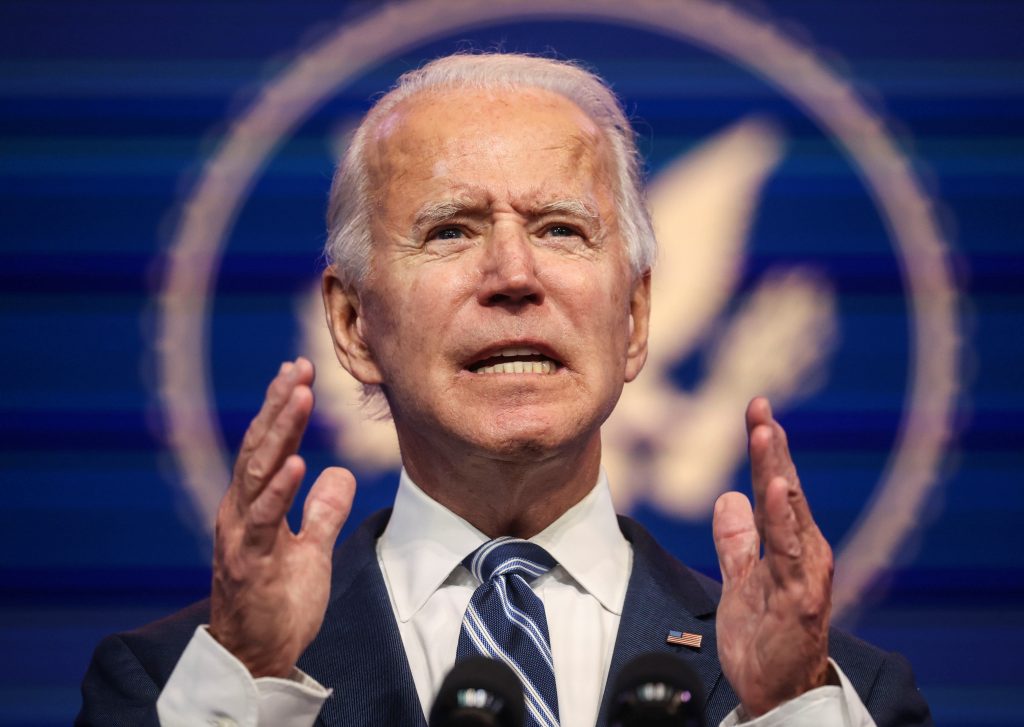 Most Ukrainians were understandably relieved to see the end of the 2020 US presidential election campaign. Thanks to a combination of President Trump’s impeachment and ongoing Ukraine-related corruption allegations leveled at Joe Biden, Ukraine had found itself thrust into the presidential race at a time when Kyiv counts more than ever on continued bipartisan US support as it seeks to fend off ongoing Russian aggression.

This unwelcome involvement in the US election was the climax to an awkward period in US-Ukrainian relations that began during the previous campaign in 2016 amid speculation regarding then-candidate Donald Trump’s commitment to opposing the Russian attack on Ukraine. Lingering questions over Trump’s attitude towards Russia would go on to cast a shadow over his entire presidency, with Ukraine ties also suffering as a consequence.

News of Joe Biden’s election win was greeted with cautious optimism by many Ukrainians, who viewed it as an opportunity to return to the kind of unambiguous US backing that helped consolidate international opposition to the Russian invasion of Crimea and eastern Ukraine in 2014. Biden’s personal ties to Ukraine also inspired a degree of confidence. As US vice president in the Obama administration, Biden oversaw Ukraine policy and visited the country on six occasions. No previous US president has ever been so intimately familiar with Ukrainian affairs.

Not everyone in Ukraine shared this enthusiasm. Skeptics pointed to the failure of the Obama administration to prevent Russia’s seizure of Crimea and subsequent reluctance to provide Ukraine with lethal military assistance. In contrast, the Trump administration sent anti-tank Javelin missiles to Ukraine along with other military aid.

There were also considerable differences of opinion over what a Biden presidency might mean for Ukraine domestically. As US vice president, Biden was at the forefront of an anti-corruption reform agenda that aimed to facilitate Ukraine’s integration into the Euro-Atlantic community. Some hope Biden will now revive these efforts and help undermine an attempted counter-revolution that is currently gaining momentum in Kyiv with support from Ukraine’s pro-Russian political forces and the country’s oligarchs. Others object to what they regard as the prospect of undue outside interference in domestic Ukrainian affairs, while there are also fears that a “tough love” approach from the Biden administration may end up damaging Ukraine’s already brittle relations with international institutions.

Regardless of changes at the White House, the foundations of the relationship between the United States and Ukraine are solid. Bipartisan US support for Ukraine has been a consistent feature since the country first gained independence in 1991. This has remained the case despite the turbulence of recent years.

Nevertheless, Joe Biden’s election win paves the way for a new chapter in the strategic partnership between the two countries. The Atlantic Council invited a selection of experts to share their thoughts on what a Biden presidency might mean for the US-Ukraine relationship.

Iuliia Mendel, Spokesperson for President Zelenskyy: The President of Ukraine was among the first world leaders to congratulate Joe Biden when it became clear that he had secured victory in the US presidential election. In his message of congratulations, President Zelenskyy underlined that the friendship between Ukraine and the United States will only grow stronger during his presidency. We are now very much looking forward to future collaboration. We wish Joe Biden the strength to cope with all the challenges of these turbulent times. The US can always rely on Ukraine as a good friend and partner.

Lisa Yasko, Ukrainian MP, Servant of the People party: Joe Biden is very experienced and has an excellent working knowledge of Ukraine. His presidency is a great opportunity for bilateral US-Ukrainian relations to reach a new level. I am also happy to note that Biden’s vice president, Kamala Harris, has joined him in condemning Russian aggression against Ukraine. I don’t imagine anyone in Kyiv is currently under any illusions that Ukraine needs to solve its problems by itself. This means addressing the country’s rule of law shortcomings along with key issues like ongoing corruption and insufficient economic growth. However, it is equally clear that a strong and democratic Ukraine can become an important partner for the US in Eastern Europe. I am happy to say that President-elect Biden appears to subscribe to this point of view. Looking ahead, it would be very encouraging if the incoming Biden administration chooses to appoint a new US special envoy to Ukraine and revive the role previously held by Kurt Volker until his resignation in September 2019. This would be a signal that Ukraine is a foreign policy priority for the Biden administration.

Alyona Getmanchuk, Director, New Europe Center: I expect the Biden presidency to revitalize the US-Ukraine strategic partnership. Ukraine had many friends and allies within the Trump administration, but in crucial situations it is always important to have the President of the United States personally on your side. On a number of occasions during the presidencies of both Barack Obama and Donald Trump, important decisions relating to Ukraine became stuck in the Oval Office. A Biden presidency is especially good news for Ukraine because he probably knows Ukraine better than any of his predecessors at the White House. Unlike Trump, Biden also appreciates the nature of the threat that Putin’s Russia poses to America’s allies in general and to Ukraine in particular. I believe Biden will be more vocal than Trump on two key Ukrainian issues: domestic reforms and Russian aggression. All of the major reforms that took place in Ukraine since 2014 featured either US support or direct US involvement. Reducing the power and influence of the oligarchs will also remain one of the top priorities. At the same time, there are still question marks over who will be in charge of international affairs and policy towards Ukraine, with some concerns over the possibility that some officials from the Obama administration may take on senior roles in the Biden White House.

Oleksiy Goncharenko, Ukrainian MP, European Solidarity party: The election of Joe Biden will have a major influence on global affairs and especially on Ukraine. Biden knows more about Ukraine than any previous US president. He has visited Ukraine on numerous occasions, knows many leading Ukrainian politicians personally, and understands the challenges facing the country. This is very encouraging for Ukraine. It may not be so promising for certain Ukrainian public figures, but that makes Biden’s election victory even better news for the Ukrainian people. In terms of geopolitics, Biden has no sympathy for Vladimir Putin. He has a good sense of who the Russian leader is and what he represents, without either overestimating or underestimating him. This is also a positive for Ukraine, as it gives us reason to believe that Biden will recognize the importance of addressing ongoing Russian aggression against Ukraine. I hope Biden will bring the United States back to its leading role in international affairs. If he does so, NATO will be strengthened, US allies will be more confident of American support, and the world in general will be a safer place.

Brian Bonner, Chief Editor, Kyiv Post: Biden’s election is great news for Ukraine. Trump would have simply disregarded Ukraine for another four years while playing up to Putin. I think the Obama-Biden team have realized they were too soft on Russia during the Obama presidency. Biden won’t make that mistake again. Instead, Ukraine will get more support for its battle against the Kremlin. I also expect the Biden administration to take aim at those standing in the way of a genuine fight against corruption in Ukraine. I predict that Biden will become the first US president to visit Ukraine since George W. Bush in 2008. In order to really get even with Trump, Biden should invite Ukrainian President Volodymyr Zelenskyy to the White House as soon as possible. He should also push to get a new US ambassador in place in Kyiv.

Solomiia Bobrovska, Ukrainian MP, Holos party: President-elect Biden possesses a deep understanding of Ukraine’s security and reform challenges, solidified by his experience during six visits to Ukraine as US vice president over the past decade. We consider the US to be our strategic partner and can now expect to see further American support in the struggle to fight corruption by building strong institutions. US-Ukraine security cooperation will also continue. I am encouraged by the tough stance of President-elect Biden towards Russia as a threat to democracy and global peace, and expect this to translate into efficient deterrence measures. In the energy sector, this includes preventing the completion of the Nord Stream 2 pipeline. In terms of military security, this means weapons and further assistance for Ukraine. There may also be enhanced US support for Ukraine’s cyber and informational defense efforts. Overall, I see a positive outlook for US-Ukraine relations over the next four years, with greater engagement from the Biden administration backed by the bipartisan support that Ukraine has always enjoyed in the United States.

Michael Bociurkiw, Global Affairs Analyst: As US vice president, Joe Biden was the Obama administration’s point man on Ukraine. Who can forget his impassioned 2015 speech in the Ukrainian parliament, calling on MPs to fight corruption? As president, Biden will now be revisiting his old Ukraine case file. He will find that the situation is in many ways even more challenging than it was five years ago, thanks to an apparent counter-revolution led by pro-Russian forces and oligarchs that is currently underway in Kyiv. We can expect Biden to maintain a very low tolerance level towards such shenanigans as the Ukrainian Constitutional Court’s recent attempts to dismantle anti-corruption bodies. Meanwhile, there are still about two months of the Trump presidency remaining. This gives Russian President Vladimir Putin a window of opportunity to ratchet up the conflict in eastern Ukraine and otherwise alter the situation in his favor. Once the Biden presidency begins, bipartisan support for Ukraine in the US House and Senate will likely remain strong. However, we should not expect the US to suddenly re-emerge as the world’s top cop. The recent US presidential election was anything but a mass repudiation of Trumpism and isolationism. With this in mind, the Biden administration will likely look to establish its foreign policy red lines carefully.