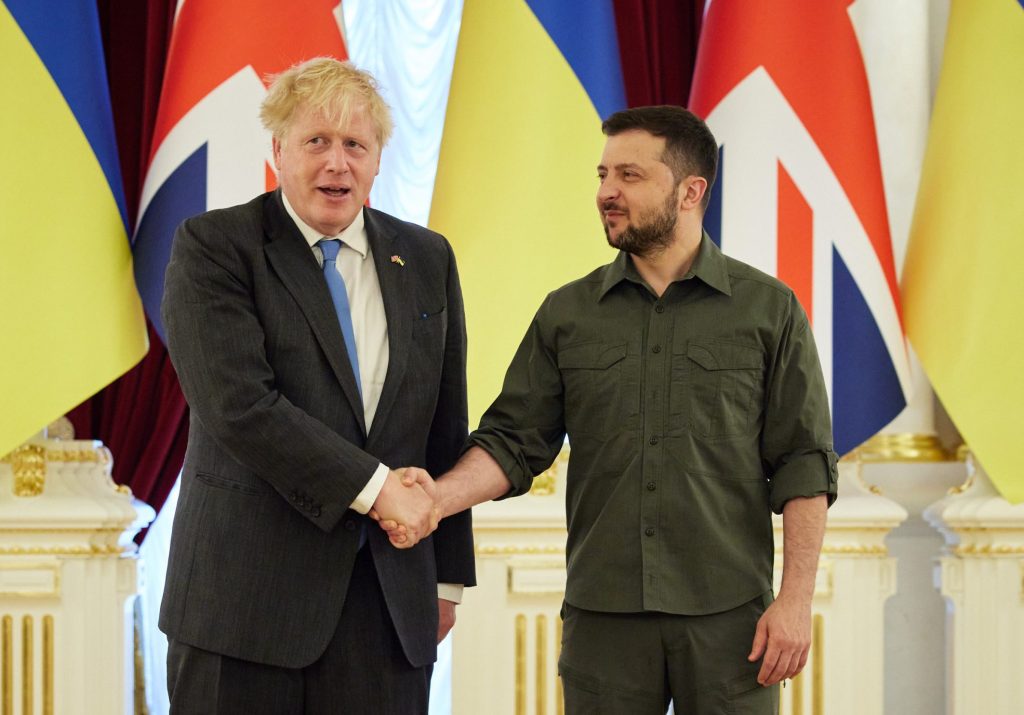 The Mayor of Ukrainian Black Sea port city Odesa announced last week that he was making British Prime Minister Boris Johnson an honorary citizen. This was not the first time Ukrainian officials have sought to show their appreciation for the UK leader. A number of Ukrainian towns and villages have already announced plans to unveil Boris Johnson streets. Meanwhile, when the British PM survived a recent Westminster no confidence vote, senior government figures in Kyiv flooded social media with congratulatory posts.

Ukrainian businesses have also been capitalizing on the wave of Boris mania sweeping the country. One particularly creative Kyiv cafe has seen business boom thanks to the launch of a Boris Johnson croissant, which comes complete with a vanilla ice cream topping in homage to his signature mop of blond hair.

This enthusiasm for the British politician appears to be shared by the Ukrainian general public. A poll published by UK peer Lord Ashcroft on June 28 gave Johnson a 90% favorable rating among Ukrainians, making him the most popular foreign politician in the country and placing him just 3% behind Ukrainian President Volodymyr Zelenskyy. Notably, Johnson’s poll result was more than double that of French President Emmanuel Macron and German Chancellor Olaf Scholz.

The British PM’s high standing owes much to the staunch support his country continues to offer Ukraine as it battles against Vladimir Putin’s invasion. The UK recently unveiled a new USD 1.2 billion military support package, bringing the total since the start of the war to USD 2.8 billion. This makes Britain Ukraine’s second-largest military partner after the United States.

Nor is it just a matter of quantity. Crucially, Britain first began delivering anti-tank weapons to Ukraine in January 2022. This was some weeks prior to the outbreak of hostilities at a time when many other Western nations remained deeply reluctant to arm the country despite mounting evidence of Russian preparations for a major offensive.

The British decision to provide Kyiv with NLAW anti-tank missiles was an important landmark that changed perceptions of the looming Russian threat and encouraged other nations to follow suit. While this initial wave of military support ultimately failed to deter Moscow, the defensive weapons provided in early 2022 would go on to play a vital role during the first month of the war as Ukraine defeated Putin’s troops in the Battle for Kyiv.

Johnson’s personal interventions have also contributed greatly to his popularity in Ukraine. Few Ukrainians will forget his surprise early April trip to Kyiv, which came just days after Russian troops had retreated from the outskirts of the beleaguered but defiant city. Johnson was not the first Western political leader to arrive in the Ukrainian capital following the outbreak of hostilities, but his impromptu walkabout in downtown Kyiv together with President Zelenskyy was to prove instantly iconic. It sent a powerful message of solidarity and resolve to global audiences while reassuring Ukrainians that they were not alone. When Johnson made his second visit to wartime Kyiv in mid-June, he received the kind of authentic greeting normally reserved for old friends.

The British leader’s unambiguous public statements on the war have further endeared him to Ukrainians. He led the way among international politicians by declaring in the early days of the invasion that Ukraine could win, and has frequently reiterated his faith in an eventual Ukrainian victory. While some other European leaders preach the language of compromise and concessions, Johnson has spoken plainly of the need to defeat Vladimir Putin. This tough talk has contrasted favorably with German indecision and Emmanuel Macron’s well-publicized fear of humiliating the Russian dictator.

In addition to applauding the clarity of his geopolitical stance, many Ukrainians have also been personally charmed by Johnson. They are savvy enough to understand that his bumbling Englishman persona is largely an act, but tend to enjoy his capering nonetheless. This is very much in line with the personality-driven political culture of Ukraine’s fledgling democracy, which generally eschews ideology and often resembles a high school popularity contest. Indeed, the carefully curated Boris brand is in many ways tailor-made for a country that just three years ago saw fit to elect a celebrity comedian as president.

Johnson’s many critics in the UK have long accused him of using the war in Ukraine to distract attention from his mounting domestic woes. There may well be some truth in such claims, but it is fair to say that Ukrainian audiences do not care. After three decades of often eye-wateringly corrupt post-Soviet politics, they are inclined to assume a degree of self-interest in even the noblest of crusades and see nothing wrong with the British PM benefiting politically from his support for Ukraine.

Likewise, most Ukrainians are familiar with Johnson’s Winston Churchill obsession and are unconcerned by suggestions that he views the current war primarily as an opportunity to emulate his idol. On the contrary, the Ukrainian public overwhelmingly shares Johnson’s vision of Vladimir Putin as a modern-day Adolf Hitler and welcomes the UK leader’s commitment to the Ukrainian cause, even if it is motivated by the pursuit of his own grand Churchillian ambitions.

Such pragmatic thinking is hardly surprising. After all, Ukraine is currently engaged in a desperate fight for national survival. Vladimir Putin has made no secret of his genocidal intentions toward the country, while the methodical and consistent nature of the war crimes committed by his invasion force underline Russia’s readiness to realize Putin’s sick dream of a Ukraine without Ukrainians. At this darkest of hours for the Ukrainian nation, Boris Johnson has risen to the challenge as both a friend and a partner. While others have hesitated or advocated appeasement, his bold response to Putin’s invasion has captured the imagination of Ukrainians and won their affection.

Celebrated in Ukraine, the British Prime Minister is increasingly under attack on the domestic front where he faces growing public calls for his departure and a powerful rebellion within the ranks of his own party. However, even his most vocal detractors would agree that he has got Ukraine right. As far as the Ukrainians themselves are concerned, this is all that matters. Boris Johnson may have lost his magic touch at home, but he can count on a warm welcome in Kyiv.